Hong Kong's Protestors Have Their Own Special Slang. Here's a Glossary of Some Common Terms

“I was using magic last night when someone messaged to ask if I needed to be picked up from school.” No, that’s not a line from Harry Potter. It’s the kind of thing a Hong Kong protestor might say after a clash with police.

Hong Kong’s protestors have their own argot. Cantonese, Hong Kong’s lingua franca, is complicated enough with its nine tones. But even a native speaker might not understand a conversation between protestors, who have created between them a unique vocabulary.

Although many would accuse them of making light of violent unrest, the use of slang “keeps people sane,” argues Wee Lian Hee, a language professor at Hong Kong Baptist University. “If [protestors] talk formally all the time, I suspect the movement would soon become tiresome,” he tells TIME.

The recent withdrawal of the controversial extradition bill, initially the trigger of the demonstrations, has done little to pacify public anger. Protestors continue to take to the streets, communicating in a jargon that reveals much about how they see each other, the authorities, and their actions.

Protestors refer to each other as “hands and feet.” The term conveys the idea of unity: when the hands and feet of a protestor are injured, other protestors feel his or her pain.

“I dreamed that I threw a petrol bomb last night,” a protestor might say — except he wasn’t actually dreaming. Many use the word to avoid directly stating that they were involved in unlawful activity.

Similar to “dreaming,” the term “shopping” (literally to stroll around, or walk the streets) is used euphemistically to mean one was out at a protest. With clashes between police and protestors often occurring in busy retail districts that are home to glitzy malls, the “shopping” metaphor is oddly apt.

Ever since it started shuttering train stations closest to protest sites, the city’s subway operator has been accused by protestors of siding with the police, who in turn are seen as an arm of the Beijing-backed government. Protesters have responded by vandalizing stations, destroying equipment such as ticket machines, and referring to the Mass Transit Railway (MTR) with this derogatory term, which rhymes with the actual name of the MTR in Cantonese.

Undercover cops are referred to by protestors as “ghosts.” Young, black-clad and wearing face masks, these non-uniformed officers fit right in on the barricades before springing into action to make arrests. Two fired warning shots during violent clashes last week.

Protesters hold umbrellas to protect themselves from police attack in Hong Kong on Aug. 31, 2019.
Alda Tsang/SOPA Images/LightRocket via Getty Images

When front line protestors shout “It’s raining!” it may actually be — Hong Kong’s summers are notoriously wet. But most of the time, it’s a shorthand way of saying “Everyone open your umbrellas,” often because police are about to use pepper spray.

When clashes between police and protestors last well into the night, long after train services have stopped, chat groups on encrypted messaging app Telegram start buzzing with information about “school pick-up” services. Supporters of the protestors who have cars — or “school buses” — let protesters know where to meet them, how many people they can pick up, and which districts they’re able to drive to.

Demonstrators seen during a protest action in front of a government building in the Central district of Hong Kong, on Aug. 18, 2019.
Gregor Fischer/picture alliance via Getty Images)

Surgical and construction masks hide identity, but are useless when police fire salvos of tear gas. Proper gas masks — nicknamed for the snout-like shape of their filters — have become standard equipment.

To “use magic” means to start fires. Sadly, it’s a term that has gained traction in recent weeks as hardline protestors become increasingly reckless in their actions, setting barricades and other objects ablaze.

Blue is the unofficial color of supporters of the police and government (as opposed to yellow, which represents the pro-democracy camp). “My grandma is so deep blue,” a protester might say. “But my dad is only light blue.” 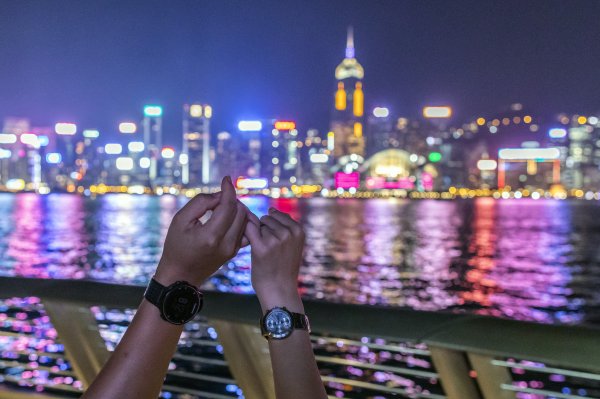 Hong Kong People Are Better Than Their Current Politics
Next Up: Editor's Pick