Here Are All the Upcoming Joker Movies

Joaquin Phoenix’s Joker may be the most controversial version to hit movie theaters, but he will be far from the last. The Joker has already broken the box office record for the best October opening, and the character is beginning to look like a solution to Warner Bros and DC’s superhero crisis.

Heath Ledger’s Oscar-winning turn as the Joker in The Dark Knight is the stuff of legend, and for years, no actor wanted to play the role for fear they wouldn’t measure up to Ledger’s take on the deranged comedian. But in the past several years, two different actors, including Phoenix, have taken a crack at the role.

First, there was Jared Leto’s version in 2016’s Suicide Squad. His performance received poor reviews, with TIME’s Stephanie Zacharek calling his Joker “so textbook twitchy that he barely comes off as menacing.” And this October, Phoenix put his stamp on the character, and again the reception has been mixed. “Phoenix is acting so hard you can feel the desperation throbbing in his veins,” Zacharek wrote in her review. “He has often been, and generally remains, a superb actor. Just not here.”

Neither reviews nor controversy deterred audiences from either movie, and both Leto and Phoenix have talked about possibly returning to their respective versions of the crazed clown. That could be good news for Warner Bros., which has struggled to sustain its DC superhero franchise. In 2018, the much-hyped Justice League became the lowest-grossing movie in the DC Entertainment Universe. Shortly after its release, Batman actor Ben Affleck and Superman actor Henry Cavill both announced they would retire their capes, essentially forcing the studio to reboot the franchise.

Though Wonder Woman and Aquaman remain DC’s breadwinners — and are each getting sequels in the next few years — the studio has greenlit a slew of other movies they hope can buoy the ailing super-team, including a Robert Pattinson-led Batman film.

The studio also seems to be toying with the idea of several Joker sequels. Here’s everything you need to know about the many Joker movies in the works.

Joaquin Phoenix is open to a sequel to Joker

Joaquin Phoenix’s turn in Joker seems to be a solo venture, at least for now. The origin story focuses mostly on the villain and not the caped crusader. The movie (minor spoiler warning) is set when Bruce Wayne, a.k.a. Batman, is still a young kid. So unless Phoenix plans to don old-age makeup, it’s unlikely that he will appear as a villain in The Batman starring Robert Pattinson.

It’s also unclear whether the story of Joker will actually impact The Batman. After Affleck stepped aside as director and star of the film following poor reviews for Justice League, writer-director Matt Reeves (who helmed the critically acclaimed Planet of the Apes reboot films) stepped in. Reeves has confirmed that The Batman will be a part of the DCEU, but has also called it a “standalone story.”

Still, it’s possible that The Joker will get a sequel. Phoenix has never agreed to film a sequel before, but seemed open to the possibility of reprising his role as the crazed clown in recent interviews.

Jared Leto’s Suicide Squad spinoff may not be happening

Jared Leto went method for his portrayal of The Joker in David Ayer’s Suicide Squad, and his toxic love story with on-again-off-again girlfriend Harley Quinn (Margot Robbie) was pitched as the center of that film. At Comic-Con, Will Smith revealed that Leto apparently sent a live rat to Robbie’s trailer.

But despite all of the hype, Leto was barely in that film. Ayer has said if he could remake the movie, he would restructure it with Leto’s Joker as the main villain. Perhaps in order to right that misstep, Warner Bros. announced a Suicide Squad spinoff that would focus solely on the Joker, starring Leto.

But now it’s unclear if studio execs have changed their minds. The trailer for Harley Quinn’s spinoff, Birds of Prey, definitively writes the Joker out of the narrative. Harley says In a voiceover for the teaser that she and the Joker have broken up, and she even throws knives at a picture she’s drawn of his face. Leto does not appear in the trailer at all, and it’s unclear if he’ll even be in the film.

Meanwhile, James Gunn, who will be directing the Suicide Squad sequel, announced the cast for the movie, and Leto was left conspicuously off his list. It seems like the Joker may have been written out of the DCEU. Warner Bros. has reportedly put the Leto Joker project on the back burner.

Warner Bros recruited Glenn Ficarra and John Requa, who helmed Crazy Stupid Love, to make a “twisted” romance movie starring Harley Quinn and the Joker, played by Suicide Squad actors Robbie and Leto. One insider described it as “When Harry met Sally on benzedrine” to the Hollywood Reporter.

Suicide Squad offered a preview of their backstory: Quinn was treating the Joker and fell for him. She voluntarily dived into acid to prove her love. Twisted indeed. But Warner Bros. hasn’t offered any updates on the story since 2017. And given that Birds of Prey is subtitled The Emancipation of Harley Quinn, it would seem unwise to undo all the progress that Harley has made by throwing the two toxic lovers back together. 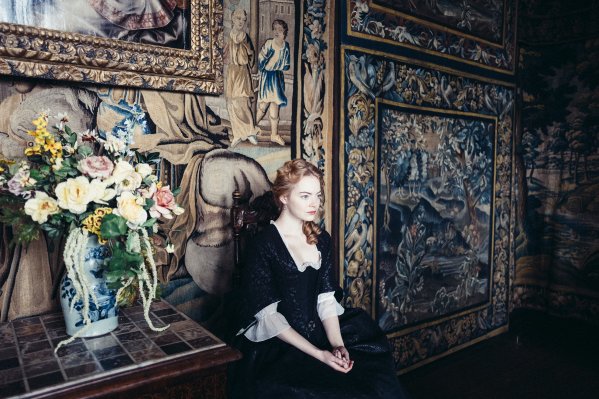 The Favourite Is a Wicked Delight Filled With Marvelous Performances
Next Up: Editor's Pick