Ruth Bader Ginsburg Has No Plans to Retire. But Washington Is Preparing for the Battle Over Her Seat

When the news dropped in late August that 86-year-old liberal Supreme Court Justice Ruth Bader Ginsburg had been treated this summer for a tumor on her pancreas, President Donald Trump went out of his way to wish her well.

But behind the scenes, a well-established and stress-tested system made up of the White House, the Senate and a constellation of outside conservative judicial groups stands ready to replace her if she steps down before the presidential election.

This is not to say a vacancy is necessarily imminent. The Supreme Court said in a statement that Ginsburg’s “tumor was treated definitively and there is no evidence of disease elsewhere in the body.” And Ginsburg remained active during her treatment and has already made a public appearance after the three-week treatment concluded. Ginsburg has always waved off questions about her retirement, and has repeatedly claimed she will stay in the job as long as she retains her mental strength. She has also hired law clerks through 2020.

But both Republicans and Democrats are keenly aware that a Ginsburg vacancy under the Trump Administration would represent an opportunity to tilt the rightward shift of the court to a 6-3 conservative majority — something Democrats would be all but powerless to stop given the Republican-controlled Senate and the White House selection processes already in place. “It’s a nightmare scenario,” says a Senate Democratic aide.

Under Trump, the Supreme Court confirmation process has been honed through two prior vacancies. His team, with the cooperation of Senate Majority Leader Mitch McConnell, has filled two seats on the nation’s highest court with Justice Neil Gorsuch and Justice Brett Kavanaugh along nearly party line votes, cementing a 5-4 conservative majority on the court.

If another seat opens before the election, the process would have to proceed without the leadership of former White House Counsel Don McGahn in the White House or veteran Iowa Republican Sen. Chuck Grassley in the top seat on the Judiciary Committee, who were both instrumental in shepherding the Gorsuch and Kavanaugh nominations. Many of Grassley’s staff members who were active in vetting the nominees have left the committee as well, as have two of McConnell’s longtime staffers in his office.

Some on the right are concerned that the White House isn’t ready for how intense the fight would be to replace a liberal justice. “The left is going to throw everything they have at whoever the nominee is and it’s going to be a brutal fight,” says a source familiar with discussions on the topic.

But others in the Administration don’t expect the process to change much. “The different leadership are still of a similar, if not like minds,” says a senior administration official, referring to White House counsel Pat Cipollone and South Carolina Sen. Lindsey Graham replacing McGahn and Grassley, respectively. Cipollone and Graham would likely approach the process with similar styles and goals to their predecessors, according to this official.

And one crucial factor that hasn’t changed is McConnell, who has made judicial confirmations a legacy issue, and remains ready to push another nominee through. “We’d fill it,” McConnell said recently of a hypothetical Supreme Court vacancy in 2020, despite the fact that he blocked President Barack Obama’s nominee Merrick Garland for nearly 300 days in 2016 because of the presidential election that year. (Trump then filled the seat Garland had been nominated for with Gorsuch.)

A spokesman for McConnell did not immediately respond to request for comment.

The prospect of McConnell filling the seat during an election cycle fills some Republicans with trepidation, opening the party to cries of hypocrisy from the left, who will already be mobilized given Ginsburg’s icon-status and groundbreaking role in codifying equal protections for women. “It is hard to imagine anything tougher than [Kavanaugh’s contentious nomination],” said a former Republican judiciary committee aide. “But filling a Ginsburg seat with a Trump appointee close to an election with everyone screaming [about] Merrick Garland [could be close].”

Trump has publicly released a list of judges he would consider nominating to the Supreme Court, and “there hasn’t been any indication that the list is going to be supplemented or expanded,” says Leonard Leo, an informal advisor to the President on judicial nominations.

There’s a “decent chance” Trump would replace Ginsburg with another woman, says Leo. But, “I don’t think at the end of the day if he’s really impressed with some other candidate and really wants to pick him, he’ll be constrained by that,” Leo says.

Preliminary vetting has already been done for the top candidates on Trump’s list, so besides keeping those files refreshed, news of Ginsburg’s cancer didn’t inspire a new frenzy of activity, three sources close to the process said.

If Ginsburg’s seat does open up, Democrats will have little hope of blocking the nominee. After Senate Republicans eliminated the filibuster for Supreme Court nominees in 2017, the Senate can now confirm a judge to the Supreme Court with a simple majority. With Republicans commanding a 53-47 majority in the upper chamber, they could confirm a nominee without any Democratic support.

Given that, if it comes time to choose a nominee, “The key will be for Leader McConnell to make sure that he’s got the full support of the Republican conference,” says Leo. He notes one senator in particular: “Susan Collins will have to just be comfortable with the state of play,” he says.

All eyes will be on Collins, a pro-choice Republican senator who provided a decisive vote to confirm Kavanaugh in 2018. Collins, who is facing re-election in 2020, told Politico, “Have I lost some votes because of my decision to support Justice Kavanaugh? Yes, I have. And I’m sad about that because I explained in great depth my decision-making.”

But there’s no guarantee Collins will have to face another Supreme Court choice before next fall. “We’re always prepared for a vacancy,” says Carrie Severino, chief counsel and policy director of the Judicial Crisis Network, a conservative political advocacy group. But, Severino notes, Ginsburg has already beaten cancer multiple times before this. “She’s someone who has been rumored to be the next person to retire since at least before Justice Scalia passed away,” Severino says.

For now, the focus in the White House remains on confirming federal appeals court judges, unless and until a new vacancy does emerge on the Supreme Court. Says the senior administration official: “There [are] actual vacancies out there needing filling.” 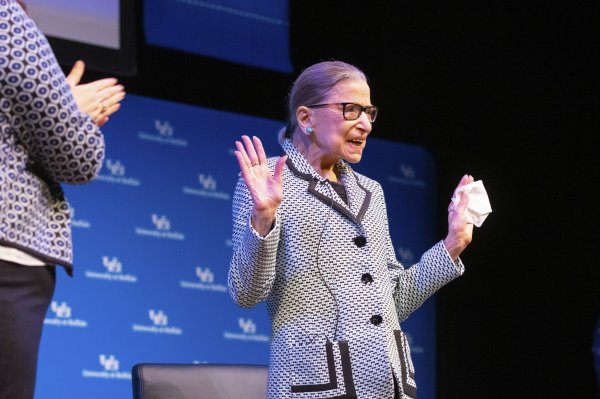