The Most Anticipated Plays and Musicals of Fall 2019

New musicals based on the works of Tina Turner and Alanis Morissette. A David Byrne album come to life. A buzzy young playwright’s provocative take on racial trauma and sexuality. Marisa Tomei in a steamy Tennessee Williams classic. It’s a promising fall theater season, with many of the most anticipated productions coming off of critically appraised runs elsewhere. Despite steep ticket prices, plays and musicals like these keep Americans flocking to the theater; Broadway attracted a record 14.77 million theatergoers during the 2018-2019 season.

Here’s a rundown of the hot tickets in New York City this fall.

The Inheritance swept the Olivier awards earlier in 2019.
Marc Brenner

One of two big London transfers this year, The Inheritance has been dubbed this generation’s Angels in America — and not just because of its two-part, six-plus hours running time. Matthew Lopez’s drama, which won an Olivier Award for Best New Play earlier this year, tells the interlocking story of three generations of gay men. Nearly every review uses the word “epic” to describe the production, which has been celebrated for both its humor and emotional impact.

Written by Jeremy O. Harris while he was in the master’s program at the Yale School of Drama, Slave Play deals directly with sexuality and race. Be trigger-warned. It was an off-Broadway hit last year: Wesley Morris of the New York Times called it “The single most daring thing I’ve seen in a theater in a long time.”

Oscar winner Marisa Tomei returns to Broadway to star as widow Serafina Delle Rose in a lesser-known Tennessee Williams play, which originally opened on Broadway in 1951. In the play, Rose “rekindles her desire for love, lust and life in the arms of a fiery suitor,” according to the production notes.

Also bringing star power to Broadway is Mary-Louise Parker in a literary thriller that got excellent reviews at the Williamstown Theatre Festival. Tony winner David Cromer directs the story of an isolated Ivy League creative writing professor who is drawn to a brilliant student.

Adrienne Warren (R) as Tina Turner in a performance in London at the Aldwych Theatre on April 17, 2018
David M. Benett—Getty Images

Another critically acclaimed hot ticket from London: Adrienne Warren, who dazzled that city with her portrayal of Tina Turner, brings her star-making performance to Broadway. The show, directed by Phyllida Lloyd (Mamma Mia!) with a book by playwright Katori Hall, injects a fresh blast of energy into the story of Turner’s triumph over adversity. It also features 23 songs (the original cast album is already out), including hits like “River Deep, Mountain High” and “Proud Mary.”

Another new musical with an A-list creative team and great out-of-town reviews is Jagged Little Pill, based on Alanis Morissette’s 1995 album. It is directed by Tony Award winner Diane Paulus (Waitress, Pippin), with the book by Oscar winner Diablo Cody (Juno, Tully). It got a rave reception in Boston, with the New York Times calling it “the most woke musical since Hair.”

Rounding out a fall rich in musical offerings is David Byrne’s stage show based on his latest album. Byrne, who led the Talking Heads in his first act, has previously written off-Broadway musicals on Imelda Marcos and Joan of Arc. For this Broadway show, Byrne is joined by 12 musicians who play songs from the new album as well as Talking Heads classics. The production has already performed to winning reviews in 27 countries. The Guardian called it “a show heavy on funk, fun, drama, shadowplay and a sprinkling of overt politics.” 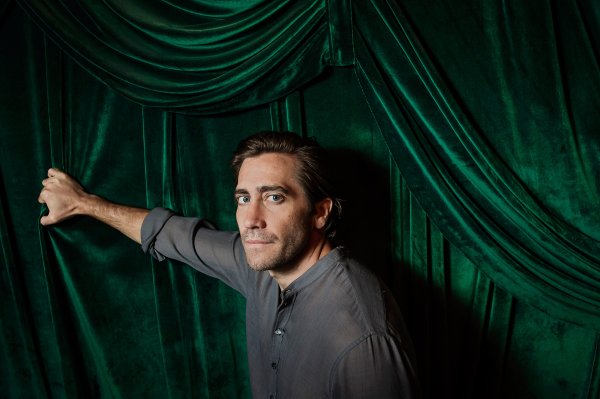 In a New Broadway Play, Jake Gyllenhaal Attempts Something Radical: Normalcy
Next Up: Editor's Pick