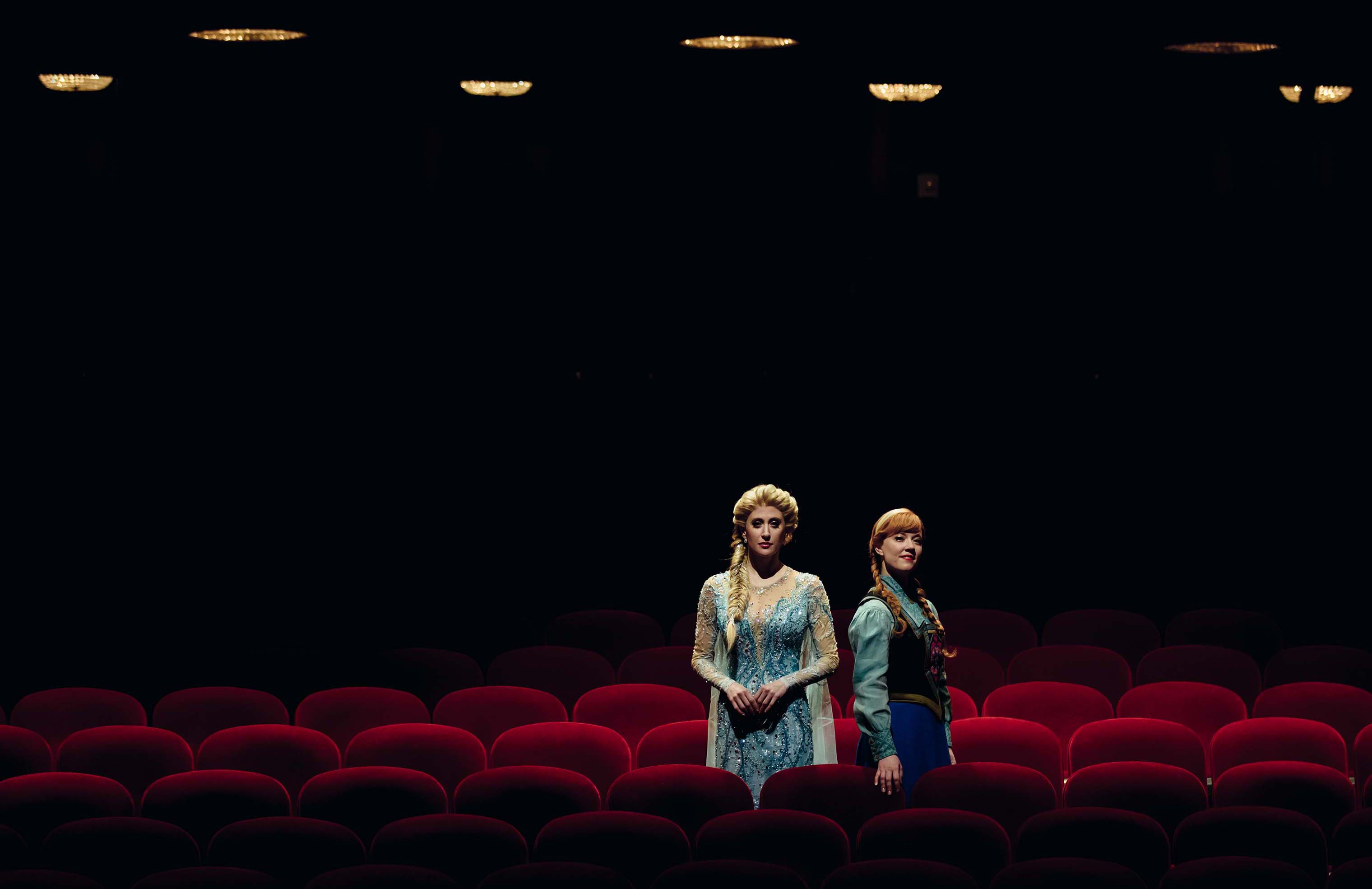 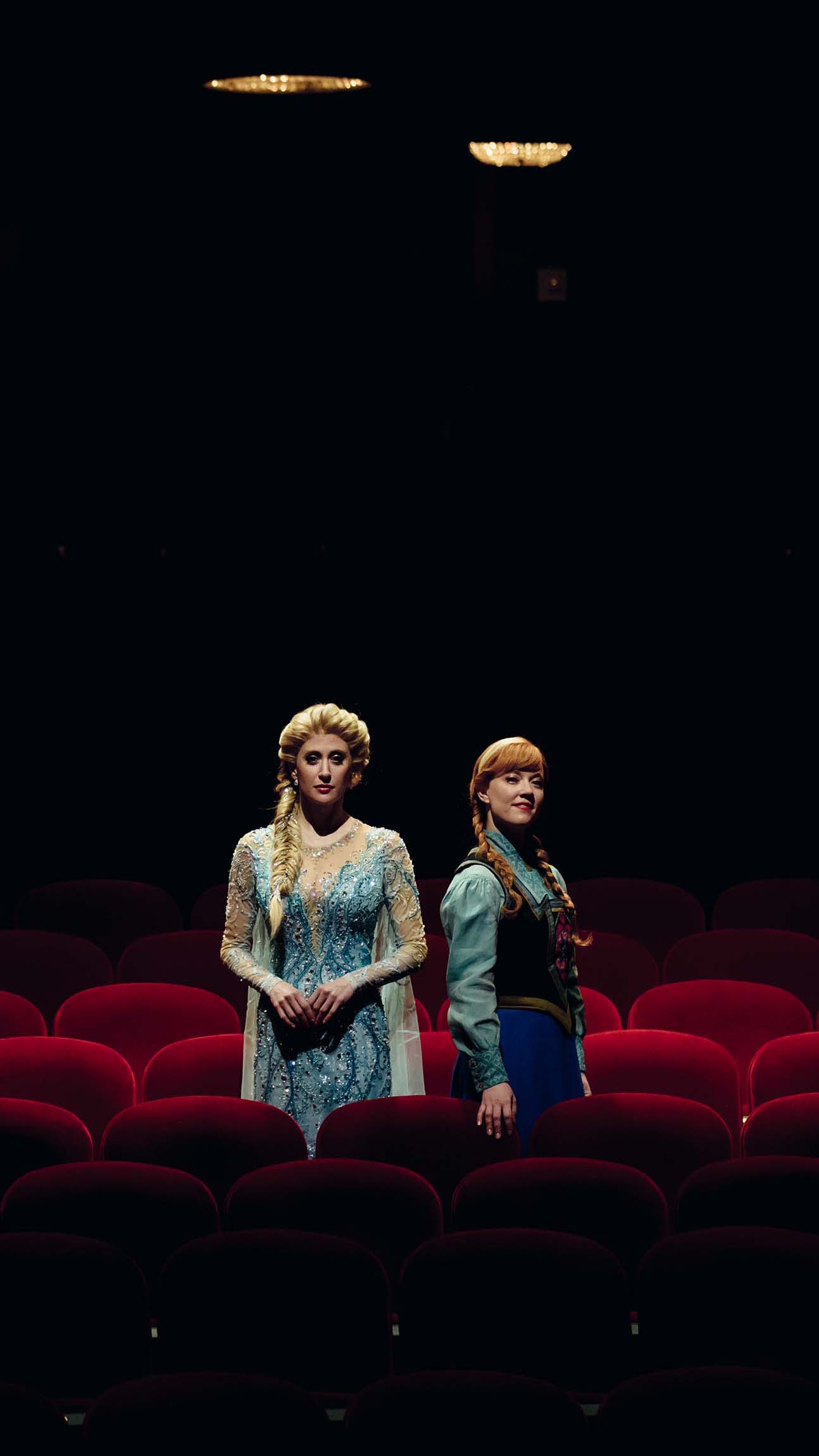 Inside Disney’s Ambitious Plan to Bring Frozen to Broadway
The animated film was a massive global hit at the box office. Will it work on the stage?
By ELIANA DOCKTERMAN
Photographs by SASHA ARUTYUNOVA for TIME

Caissie Levy’s dressing room is, appropriately, freezing. The Broadway veteran sips a hot cup of coffee and builds a fortress of throw pillows around her to try to warm up before she takes the stage at the St. James Theater. There, she will stand in a makeshift ice palace and rehearse “Let It Go,” the Grammy-winning anthem from Disney’s animated blockbuster Frozen. The song closes Act I of Frozen: The Broadway Musical with the wry line, “The cold never bothered me anyway.”

With visions of the Lion King musical’s staggering $8.1 billion in global ticket sales dancing in its head, Disney is now trying to replicate that success with Frozen. Four years after its release, Frozen remains the highest-grossing animated movie of all time, with $1.3 billion at the worldwide box office. Families still wait three hours to ride the four-minute Frozen ride at Disney World.

The film earned fans by upending the princess fantasy that Disney had peddled for decades: after magical queen Elsa accidentally freezes her sister Anna’s heart, the “act of true love” that saves Anna’s life is not the kiss of a prince but a self-sacrificial act by one sister for another. The movie ends with the two women happily unmarried. Now Disney will resurrect the story onstage at a time when the Time’s Up movement is forcing producers to reconsider how they portray women on stage and screen. 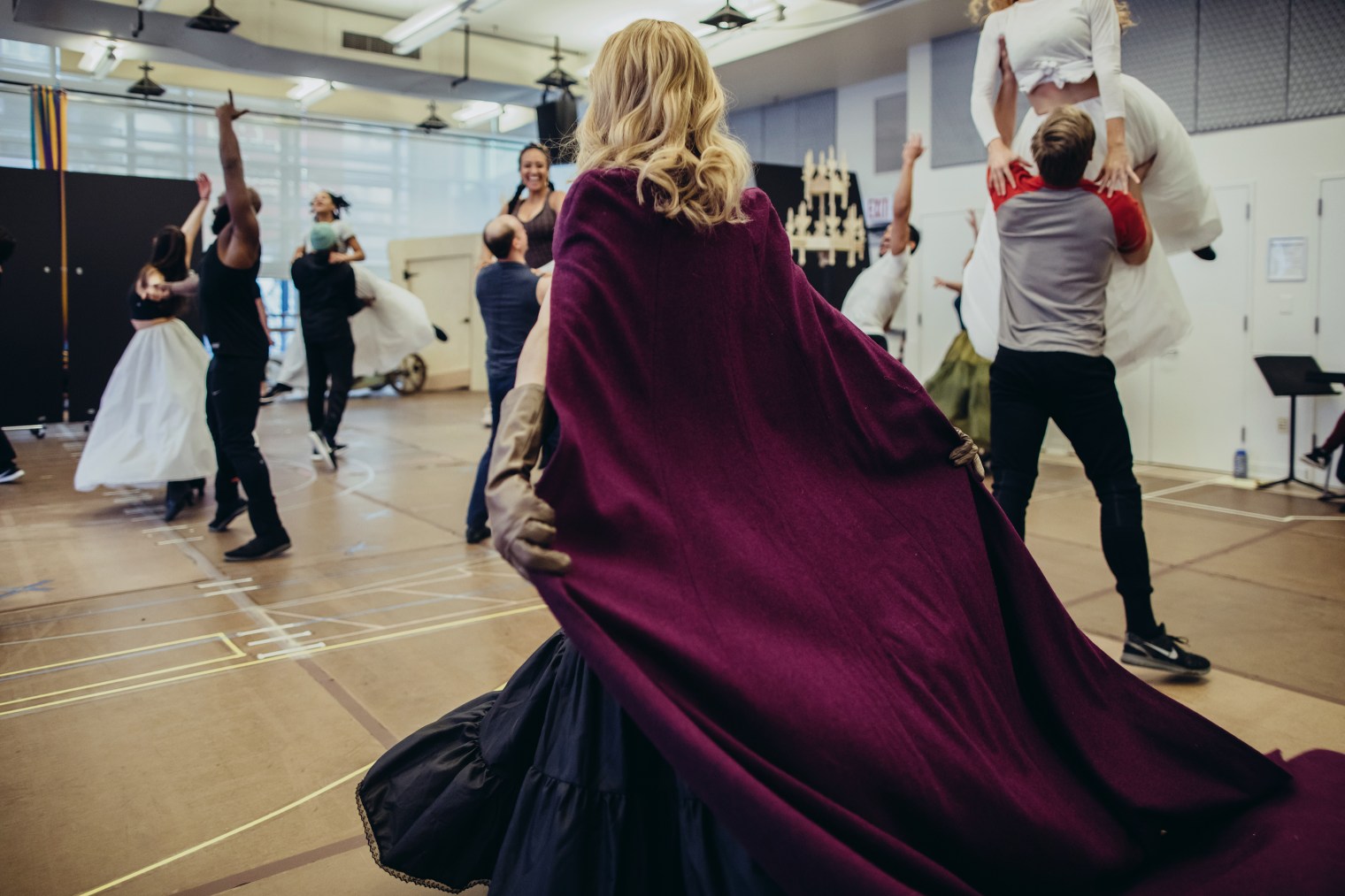 The cast of Frozen: The Broadway Musical during rehearsals in New York City on Jan. 18, 2018.

Social relevance aside, Disney is cal­culating that the musical, which began previews on Feb. 22, will also stir up ­excitement for the film’s 2019 sequel, Frozen 2, which will likely generate ­another top-selling album, another Halloween dominated by Elsa dresses and new ­attractions at the Disney theme parks. Hit movies make money. A hit movie tied to a hit musical is a profit-­spewing franchise that runs for decades.

The Lion King remains the exemplar. The best-selling musical, which opened in 1997, has so far earned more money than all of the new Star Wars movies combined. And a two-decade run has set the groundwork for a live-action 2019 film adaptation that will star Beyoncé.

But even for a hit like Frozen, de­throning The Lion King is no guarantee. The Frozen musical, which cost a reported $30 million to produce, churned through three choreographers, two set designers, two Elsas and two directors before it staged a practice run in Denver. Disney finally tapped Michael Grandage to direct; he is a Tony winner who is known for his Shakespeare adaptations and has never directed an original musical. Under Grandage’s leadership, Elsa’s inner turmoil and Anna’s fractured fantasy of romance have taken center stage—rather adult material for Frozen’s youngest fans.

The Denver show premiered to tepid reviews. Since then, Grandage has scrambled to rework 30% of the production before the Broadway premiere, on March 22. Frozen will face off with another magical phenomenon, Harry Potter and the Cursed Child. The play, which earned accolades in London, begins previews in New York on March 16.

Faced with the Boy Who Lived, Disney brought back the Frozen film’s writer and co-director Jennifer Lee and songwriters Robert Lopez and Kristen Anderson-Lopez to pen 20 minutes of new material and 12 new songs for the stage. Disney hopes that Lee’s deeper dive into the princesses’ psyches, set to the tune of the Lopezes’ new hits and bolstered by advanced onstage technology, will appeal to an older, broader audience.

“Just because a movie is a hit doesn’t mean that it has any reason to exist on­stage,” says Thomas Schumacher, who runs Disney’s theatrical group. Disappointing returns on The Little Mermaid and Tarzan proved that to be true. But for Schumacher, the Frozen decision was obvious. He saw an early cut of the film before it opened, when some of the animation was still sketched in, but recognized its musicality to be Broadway caliber. “I instantly texted [the executives in] California and said, ‘When do we start?’” he says. The Frozen musical was greenlighted before the movie even hit theaters.

“In a musical, songs are the main emotional storytelling tool,” says Lopez, sitting in the upper decks of the St. James Theater. “You can’t do a wolf chase cred­ibly onstage because wolves are very dangerous.”

“And smelly,” his creative partner and wife Anderson-Lopez chimes in.

“And smelly,” Lopez agrees. “Every time there was a big closeup in the film, you can’t see those facial features from way up here in the balcony during a musical. So that becomes a song.”

“In the movie, all the emotion is in the eyebrows,” says Anderson-Lopez. “It’s amazing what animators can do with eyebrows. We had to take those eyebrows and put them into lyrics.” 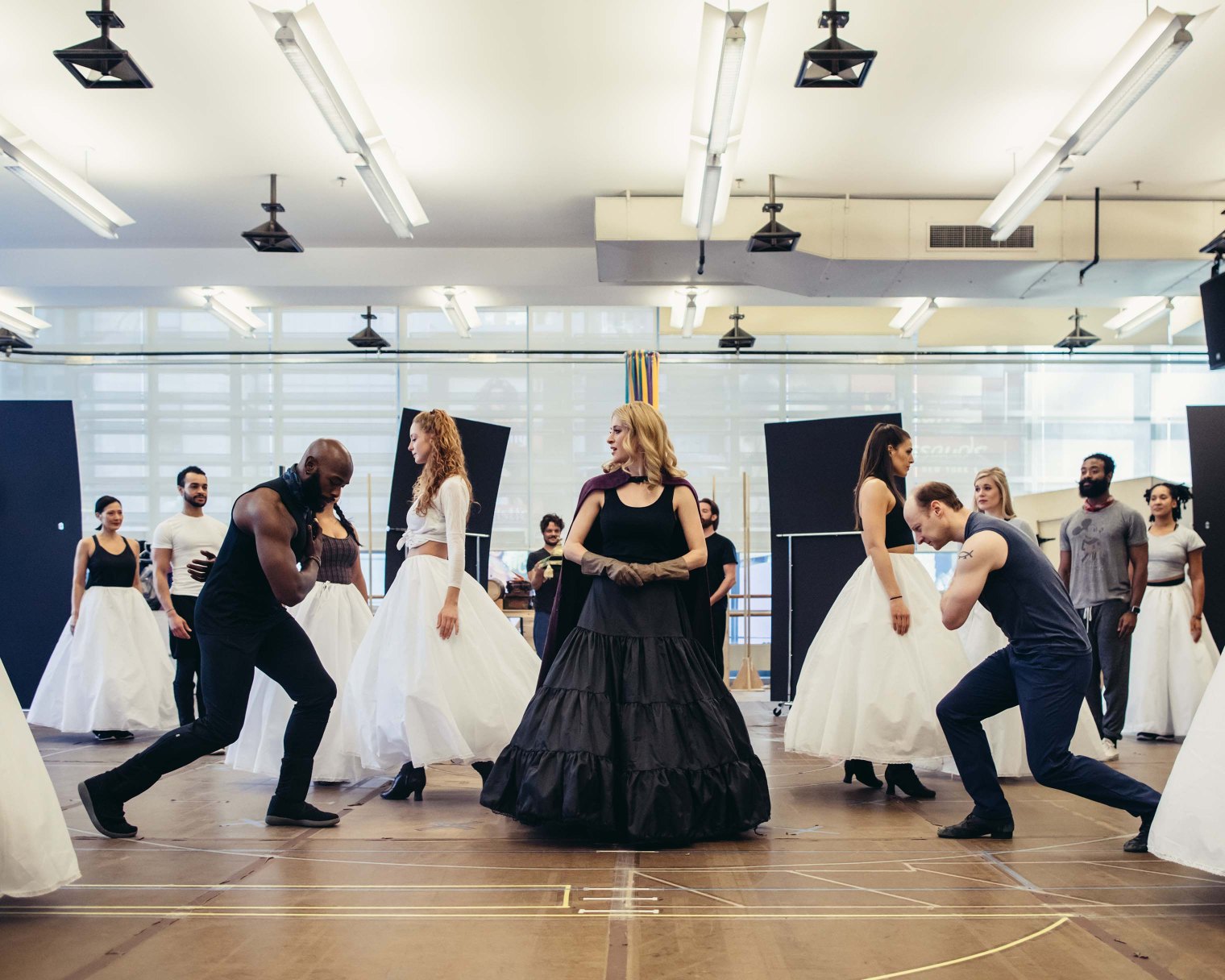 Caissie Levy, who plays Elsa, during a rehearsal at a dance studio in New York City.

Patti Murin, the actor who plays Anna, sings a new song in which she meditates on how her loneliness drove her to rush into an engagement with a prince she had just met. During a rehearsal at a brightly lit dance studio across the street from the theater, Murin tries to explain The Bachelorette and how the reality show mirrors Anna’s fairy-tale fantasies to Grandage. “Anna would totally be on The Bachelorette, and she would marry the man at once,” says Murin, who is sporting a tank top that reads goal digger.

A few feet away, Levy dons a purple cape over her T-shirt and leggings and picks up Elsa’s scepter. Amid a flurry of full-skirted dancers flying in the air, she sings “Dangerous to Dream,” another new song for the show. In it, the queen resigns herself to a life in which she must squelch desire for the sake of duty. A toddler-friendly romp this Frozen is not.

“Nobody is trying to hide that we wanted to age this story up,” says Levy. Disney has found that 70% of the people who attend its musicals are adults without children. Anderson-Lopez argues that examining how the Disney princesses’ psychological scars drive them to make certain decisions was the next logical storytelling step. “Wouldn’t Cinderella have been really messed up from what she went through?” she asks.

Grandage, who once directed a bare­foot Jude Law in an outdoor production of Hamlet on a snow-covered stage, compares Elsa’s existential crisis to the Prince of Denmark’s soliloquies. “There’s no question Elsa spends too much time on her own and contemplating why she’s here, what she’s doing, what the bigger picture is. I’m determined to make Disney the new Shakespeare,” he says without a hint of irony. In that vein, Grandage has prioritized acting over singing and spectacle. “Everyone would have been rather angry if they couldn’t sing,” he says. “But I needed them to actually act between the songs, too, which is rarer than you might think.” 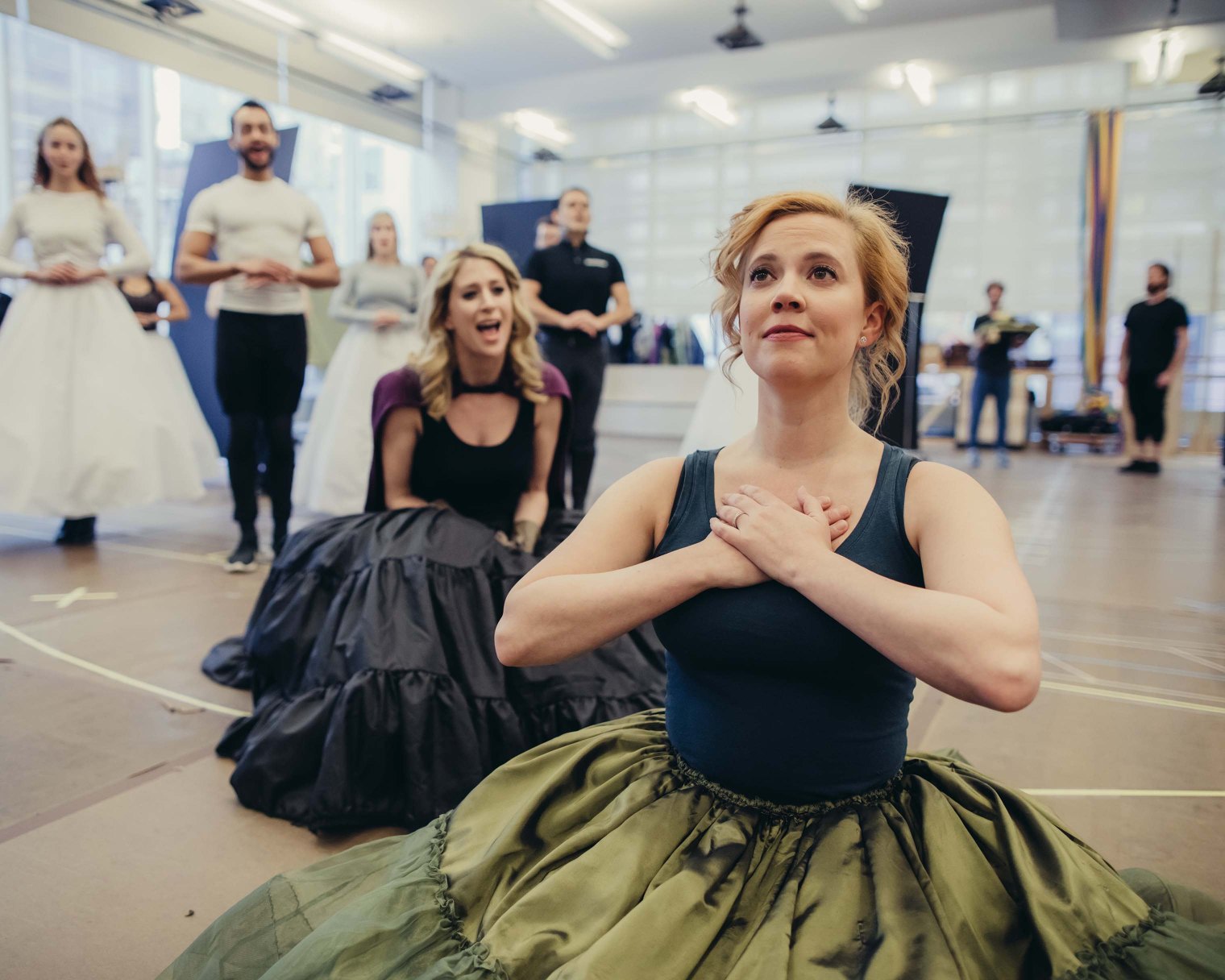 Patti Murin, who plays Anna, and Caissie Levy, who plays Elsa, during a rehearsal in New York City.

Every Disney musical aims to instill wonder. During a dress rehearsal staged for fellow Broadway performers and their families, Elsa’s smallest gestures trigger theme-park-level lighting tricks. Frost emanates from her touch and slowly envelops the set. If Elsa feels trapped, she summons jagged icicles that pierce the stage from below. When she feels free, as she does when she sings “Let It Go,” she conjures gleaming fractals from the ceiling. In one final theatrical flourish, her queenly robes fly off to reveal an ice blue dress, hand-beaded over the course of 41 days by a team of seamstresses. Dozens of girls in the audience, wearing versions of the iconic outfit, squeal.

The production team moved the back wall of the St. James by 10 feet to accommodate the 80 tons of scenery used in the show. The reindeer Sven looks like he wandered off the set of The Lion King. Inside Sven’s full-body costume, a ballet dancer holds stilts in his hands and walks on the tips of his toes. The result is a surprisingly nimble and expressive animal, though the work is so strenuous that Grandage had to hire a second dancer to play the role some nights—one of many changes made to the show since Denver.

During the flurry of revisions, Levy and Murin have clung to each other for support. Although both women starred in the musical Wicked, they have never worked together. They live in the same neighbor­hood in Brooklyn and spent one afternoon delving into Frozen fan fiction and looking up Anna and Elsa’s astrological signs. Levy laughs when Murin suggests that they post a No boys allowed sign on the warmest bathroom where they can make quick costume changes. They revel in the rare opportunity to share top billing with another woman. “This is literally the first time I’ve played a role on Broadway in a decade that doesn’t revolve around a man,” says Levy. “It might even be the first time I auditioned for a role that didn’t have a love interest.”

When the movie premiered, Frozen had a feminist moment. Elsa dethroned Barbie as the top-selling doll the following year for the first time in Barbie’s 50-year history—and not, Mattel research found, because Elsa looked all that different than Barbie. Parents believed that the powerful, independent Elsa made a better role model for their daughters. The movie laid the groundwork for more plucky princesses. Moana didn’t have a love interest, and Belle took a break from playing kidnapee to invent the washing machine in last year’s live-action Beauty and the Beast. At the House of Mouse, woke princesses are now a requirement.

“Frozen put a spotlight on the complicated relationships between women,” says Murin. “It’s not always happy, but they support each other. That’s something that has really resonated with me in the Time’s Up moment, when we as women have to work together for change.”

That’s not to say that Disney is a model of progressive ideals. After the inter­views for this story were complete, several former Disney employees accused Schumacher of harassment. (He and Disney declined to comment.)

Women in Hollywood have pledged to pressure studios to promote more women. Lee already blazed that trail when she became the first woman to direct a Disney animated film, and the first woman to direct any film that grossed more than $1 billion. “Kristen [Anderson-Lopez] and I talk about how it’s still rare for women to actually write these stories,” says Lee. “When we do get to, we end up with real women on the page, not an idealized version of what a man wants a woman to be.”

Anderson-Lopez agrees. “You get two women in a room,” she says, “and something magical happens.”

Correction: The original version of this story misstated where Caissie Levy and Patti Murin live. They live in Manhattan, not Brooklyn.

Dilys Ng is an associate photo editor at TIME Magazine.