U.K. Government Announces Plans to Suspend Parliament Before Brexit. Here's What That Means

The U.K. government announced controversial plans to suspend parliament on Wednesday morning, a gamble which could allow a “no deal” Brexit to be forced through — or preempt a vote of no confidence in the government.

The move to “prorogue” parliament will effectively lock lawmakers out of the building for several days in early September, possibly preventing them from making laws that would force Britain’s exit from the European Union to be delayed or even canceled if a deal cannot be agreed.

Britain is scheduled to leave the E.U. on Oct. 31, but currently has not accepted a withdrawal agreement which would lessen the shock of its departure. Johnson has pledged to leave on Halloween with or without such a deal — but many lawmakers are opposed to the shock economists say a so-called “no deal” Brexit would bring.

The prorogation of parliament is when the Queen ends one parliamentary session so that another can begin.

Prorogation can only happens when the Queen says so — which, in the modern era, is only after the Prime Minister has requested it. Lawmakers do not have a say in preventing prorogation.

In practice, it means sitting lawmakers will not meet for several weeks, meaning they cannot pass laws. Prorogation also gives the government an opportunity to set out its new agenda for the coming session, which is announced by the Queen in a speech to lawmakers amid great pomp and ceremony.

A Queen’s speech, in which she addresses lawmakers in parliament amid great pomp and ceremony setting out the agenda for the upcoming parliamentary session, is scheduled for Oct. 14.

Why is Johnson proroguing parliament now?

Johnson’s opponents have accused him of proroguing parliament in order to make a “no deal” Brexit more likely. But his government says a new parliamentary session is overdue. Normally a parliamentary session lasts for around a year. But the current session began in 2017, extended to give time to complex Brexit legislation.

The Johnson government announced the plan to prorogue parliament as a “plan to bring forward a bold and ambitious legislative agenda,” arguing that the current session of parliament had gone on for too long. “This is clearly the defence [the U.K. government] is going to run against charges of carrying out a constitutional outrage,” said Laura Kuennsberg, the BBC political editor who first broke the news, on Twitter.

But there is a political explanation, too. Lawmakers have been on their summer break since July 25, just one day after Johnson became Prime Minister. On Sept. 3 they are due to return. They were due to sit for around two weeks until Sept. 14, when, in keeping with annual tradition, Parliament would be suspended until mid-October to allow for party conferences to take place.

Those two weeks were shaping up to be crucial for efforts by lawmakers to legislate against a “no deal” Brexit. But prorogation means lawmakers will only sit until Sept. 9 at the earliest and Sept. 12 at the latest, reducing the amount of time they have to agree on a law which could make it illegal for the U.K. to leave the E.U. without a deal, forcing Brexit to be delayed or even canceled.

What impact will this have on Brexit?

The move basically means that the Brexit endgame has been brought forward to next week.

Lawmakers have been trying for months to design legislation which would both make “no deal” impossible and prove palatable to a majority of lawmakers. So far they have failed, but with the clock ticking down a new plan may arise in the coming days.

Alternatively, if none can be found, those same lawmakers could trigger a vote of no confidence in Johnson’s premiership — potentially toppling his government. It wouldn’t take much: Johnson has a working majority of just one vote, and several lawmakers in his party have pledged to vote against his government if it attempts to force through “no deal.”

If lawmakers vote down Johnson’s government in a vote of no confidence, they will have 14 days in which to agree on a replacement government, otherwise an election will be held. Officials have threatened to hold that election after the Oct. 31 deadline, according to reports, effectively gambling that no majority exists for an alternative coalition government and thus ensuring a no deal Brexit.

But Johnson has also said that he wants to renegotiate the current deal between the E.U. and the U.K. — which was negotiated by his predecessor Theresa May, and which British lawmakers refused to ratify three times earlier in 2019. Should a breakthrough with the E.U. occur, Johnson has said lawmakers will be able to return to parliament to vote on a new deal before Oct. 31. “If, as I hope, a deal with the E.U. is forthcoming, parliament will then have the opportunity to pass the Withdrawal Agreement Bill required for ratification ahead of 31 October,” he said in a statement.

Alternatively, it could even mean May’s deal being brought back from the dead. The Speaker of the House of Commons, John Bercow, ruled out a fourth vote on the deal when May was Prime Minister, based on the argument that the same legislation could not be voted on multiple times during the same sitting of parliament. In a new sitting, that argument becomes invalid. So, if Johnson fails to renegotiate the deal but decides May’s deal is better than no deal, and a majority of lawmakers agree with him, Britain could end up leaving the E.U. with the deal already on the table.

What has been the reaction so far?

Opposition lawmakers immediately rallied against the plans to prorogue parliament. “Boris Johnson’s attempt to suspend parliament to avoid scrutiny of his plans for a reckless No Deal Brexit is an outrage and a threat to our democracy,” said the opposition Labour Party leader, Jeremy Corbyn, on Twitter. “Labour will work across Parliament to hold the government to account and prevent a disastrous No Deal.” Corbyn also wrote to the Queen to protest against Johnson’s plan.

Lawmakers within Johnson’s ruling Conservative party also voiced opposition to the move. “It would be a constitutional outrage if Parliament were prevented from holding the government to account at a time of national crisis. Profoundly undemocratic,” said Philip Hammond, the U.K.’s former finance minister who has threatened to vote against Johnson in a vote of no confidence.

Johnson did, however, have one prominent backer in the President of the U.S. 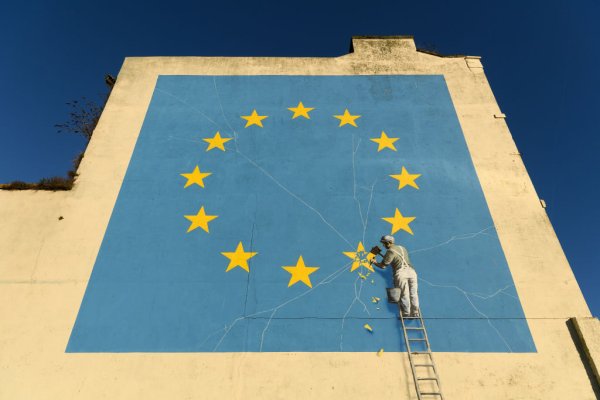 Banksy's Brexit Mural Disappears From Side of U.K. Building
Next Up: Editor's Pick