Britain’s new Prime Minister Boris Johnson will make his debut on the international stage this weekend, at the G7 summit of world leaders in Biarritz, France.

There, Johnson will have his first chance as Prime Minister to win over – or alienate – presidents and other prime ministers who have the power to shape his time in office, and Britain’s future.

President Trump, a self-declared friend of Johnson, is somebody who he will have to keep on-side during potentially divisive negotiations about a post-Brexit trade deal.

And then there’s the European Union delegation, made up of Emmanuel Macron of France, Angela Merkel of Germany, and the outgoing top official Donald Tusk. So far, they have refused Johnson’s Brexit demands, and could clash over them in public at the summit.

For Johnson’s domestic agenda, too, the stakes will be high: there is talk in Westminster of a potential fall general election to shore up his tiny parliamentary majority — and with U.K. politics so finely-balanced, slip-ups on the global stage could have dramatic electoral effects.

Here’s what to expect of Britain’s new Prime Minister Boris Johnson at the G7.

Trump and Johnson have met before, including at the U.N. general assembly in New York in 2017 when Johnson was British foreign secretary.

Trump has repeatedly spoken in favor of Brexit and Johnson himself, so you would think their first meeting both as world leaders would go off without a hitch.

John Bolton, Trump’s National Security Adviser, has said that Britain will be “front of the trade queue” once Brexit has happened. That’s good news for Johnson — whose prospects as Prime Minister hang on securing a good trade deal with the U.S. “He’ll be trying to open things up at the G7 for this projected trade deal,” says Wyn Grant, a professor of politics at the University of Warwick in the U.K. “It’s very important to his strategy going forward, so he can claim a boost to the British economy.”

But Brits, according to polls, actually take a rather dim view of Trump. More than two thirds have a negative opinion of him, according to YouGov. So Johnson may have to strike a balance between flattering the President and keeping enough distance to avert collateral damage that might hurt him in a snap election.

“That is always a risk,” Grant says. “If you’re seen to be too subservient to the U.S., this could play against him.”

A possible clash with Merkel and Macron

The G7 won’t be Johnson’s first meeting with Merkel or Macron as Prime Minister – those came earlier in the week, when Johnson traveled to Berlin and Paris to discuss Brexit ahead of the summit.

Both Merkel and Macron told him, politely, that the Northern Irish “backstop” — the part of the Brexit deal Johnson wants scrapped — would be going nowhere.

And they repeated their previous statements that Britain faces a choice between a deal very similar to the one on the table, or leaving with no deal at all. “We will not find a new withdrawal agreement within 30 days that will be very different from the existing one,” Macron said on Thursday.

“The point can’t be to exit Europe and say ‘we’ll be stronger’, before in the end, becoming the junior partner of the United States,” Macron added. “Even if [a no deal Brexit] were a strategic choice it would be at the cost of a historic vassalization of Britain.”

In a summit environment, things are likely to be unpredictable. At the G7 last year, a photo appearing to show Merkel confronting Trump stole headlines around the world. And after the same meeting, Trump left early and refused to sign the joint communique at the end.

Johnson might not do anything so rash – because he depends more on other world leaders than they do on him. “He’ll try to look like a statesman,” says Tim Bale, professor of politics at Queen Mary, University of London. “It’s a photo opportunity, nothing more.”

“There will be a superficial cordiality,” says Grant. “What he will want to do is establish himself as an international statesman, which will play well in any prospective election.”

“But you never know with Boris Johnson whether there’s going to be a political hit or not. He’s still potentially gaffe-prone.” 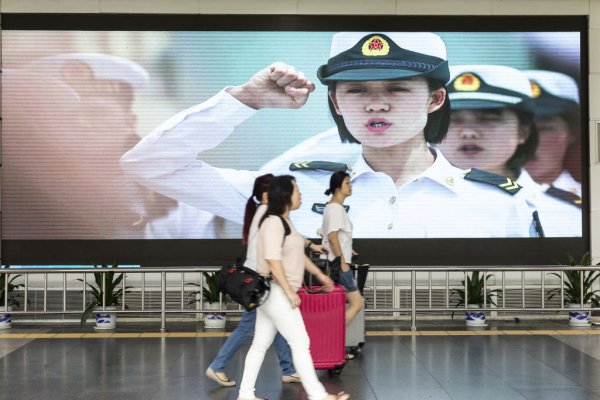