Johnson & Johnson Was Ordered to Pay $572 Million for Its Role in the Opioid Crisis. With Similar Lawsuits Across the Country, That Could Be Just the Beginning

An Oklahoma judge ordered Johnson & Johnson to pay $572 million for its role in the opioid crisis in a historic ruling on Monday, marking the first time an opioid manufacturer has been deemed responsible in court and made to pay damages. It could have implications for the slew of lawsuits filed against opioid manufacturers and distributors throughout the country.

A much bigger federal case before an Ohio judge involves at least 1,600 consolidated lawsuits from cities and counties from across the country, including hard-hit regions like Portsmouth, Ohio and Huntington, W.Va. The nationwide suit was filed in Ohio because of the state’s high opioid overdose rate, its proximity to various drugmakers’ headquarters and the judge’s experience on a previous consolidated case involving damage claims related to dyes used in magnetic resonance imaging procedures, according to the Associated Press. It is scheduled to go to trial in October.

Another 400 cases are being fought over in state courts — many of them brought by state attorney generals.

“Regardless of what happened in Oklahoma, the 1,600 cases pending in Ohio are racing towards a settlement. If anything, this trial might hasten the defendants to get the trial settled,” Abbe Gluck, a Yale law professor and Faculty Director of the Solomon Center for Health Law and Policy, tells TIME.

The financial implications of the $572 million judgment against Johnson & Johnson could extend beyond Oklahoma, according to Tom Claps, a legal analyst with Susquehanna Financial Group.

Claps wrote In a brief for a client, which was first reported by Bloomberg and emailed to TIME, that the Oklahoma settlement “suggests future damages could total $37 billion to abate the opioid crisis across the entire country.” That amount would “be divided between the various opioid manufacturers, distributors, and pharmacy/PBM defendants who face liability — not just [Johnson & Johnson],” he says.

While the defendants across the different lawsuits vary, the allegations and big names at the center of legal battles remain relatively consistent. Purdue Pharma, known for producing and marketing the opioid painkiller OxyContin, has been named as a defendant in most, if not all lawsuits. Johnson & Johnson is a common defendant, too. Both companies are defendants in the multi-district litigation case in Ohio.

Prosecution lawyers involved in the multi-district litigation in Ohio appear to be encouraged by the Oklahoma verdict.

Joe Khan, a public interest attorney at Philadelphia-based Langer, Grogan, & Diver P.C., represents cities and counties in Pennsylvania, New Jersey and Mississippi in the Ohio case. He considers the Oklahoma ruling to be a “watershed development.”

“It’s the first time that any of these claims have been trial tested,” Khan tells TIME. “It’s clear the result from yesterday helps define some parameters for parties.”

Khan believes the verdict “sends a very strong signal to defendants” that “rolling the dice (and going to trial) was not the winning strategy.”

Johnson & Johnson, which brought in revenue of more than $81 billion last year, said in an emailed statement to TIME they will be appealing the judgment, reiterating that the company “did not cause the opioid crisis in Oklahoma, and neither the facts nor the law support this outcome.” The statement also noted that opioids sold by Johnson & Johnson “have accounted for less than one percent of total opioid prescriptions in Oklahoma as well as the United States.”

“We recognize the opioid crisis is a tremendously complex public health issue and we have deep sympathy for everyone affected,” said Michael Ullmann, executive vice president, general counsel of Johnson & Johnson.

Amid reports about discussions over a settlement in the Ohio case, Purdue said in a statement: “While Purdue Pharma is prepared to defend itself vigorously in the opioid litigation, the company has made clear that it sees little good coming from years of wasteful litigation and appeals. The people and communities affected by the opioid crisis need help now. Purdue believes a constructive global resolution is the best path forward, and the company is actively working with the state attorneys general and other plaintiffs to achieve this outcome.”

The company’s website says it is working to limit opioid prescriptions and improve prescription drug monitoring programs that allow doctors to see prescription histories, in addition to noting that it “no longer has sales representatives visit prescribers to discuss opioids.”

Executives from Purdue admitted in federal court during a $600 million settlement in 2007 that the company’s marketing practices and interactions with doctors had understated the strength and addictive potential of the drug.

More than 215,000 people died in the U.S. from overdoses related to prescription opioids between 1999 and 2017. The number of deaths were five times higher in 2017 than 1999, according to the Centers for Disease Control — nearly 50,000 Americans died in 2017 alone. That year, the U.S. Department of Health and Human Services declared the opioid crisis a public health emergency.

The most important takeaway from the Oklahoma trial is the judge’s conclusion that Johnson & Johnson wasn’t merely a negligent bystander but that it affirmatively engaged in deceptive conduct, says Gluck. Oklahoma District Judge Thad Balkman said in his ruling on Monday that Johnson & Johnson engaged in “a false, misleading, and deceptive marketing campaign designed to convince Oklahoma doctors, patients, and the public at large that opioids were safe and effective for the long-term treatment of chronic, non-malignant pain.”

“Some of these companies were calling themselves helpless intermediaries,” Gluck says, adding that many of them argued all they did was sell and distribute an FDA-approved drug that Purdue made.

Also relevant, according to Gluck, is the novel way that lawyers argued the case based on a state public nuisance law that has typically been used in the past for property disputes. But “the mere fact that one judge in Oklahoma has said ‘this argument works’ doesn’t mean it’s going to across the nation,” she says. (There is no federal public nuisance law.) Specifically, “litigation over the validity of a public nuisance law would have relatively little impact” on the case before Ohio specifically, Gluck adds.

Johnson & Johnson was the only party in the Oklahoma lawsuit that opted to go to trial; the state earlier this year reached a $270 million deal with Purdue Pharma and an $85 million settlement with Teva Pharmaceuticals. The Purdue settlement orders about $200 million to go towards a trust to fund an addiction studies center at Oklahoma State University in Tulsa, according to the Associated Press. Two lesser known drugmaker defendants in the multi-state Ohio case, Endo International and Allergan, pulled out last week before a trial began and agreed to pay $15 million in settlements, Reuters reports.

But for Peter Meyers, professor emeritus of law at George Washington University, there remains “a lot of uncertainty” about what could happen with regards to Johnson & Johnson’s appeal.

It’s “certainly possible” that an appellate court in Oklahoma will look at the case and say the judge’s ruling on public nuisance grounds “is too much of a stretch,” Meyers says. But, he notes, the case will not be overturned before the Ohio case goes to trial in October, and still considers the Oklahoma ruling to be a “game-changer” that “certainly strengthens the hands of plaintiff lawyers” in similar cases.

Meyers says the Ohio case is similar to how states brought cases on behalf of their constituents in the fight against big tobacco in the late 1990s, when attorney generals for all 50 states reached settlements under which tobacco companies would pay them forever. Under the settlement, every April 15, the five largest tobacco companies pay $9 billion dollars to state governments every year, according to the Associated Press.

“The world changed when all states began bringing cases on behalf of their constituents,” Meyers says. But hardly any of that money went to victims or families who suffered the harmful effects of smoking, he adds.

“A lot of that money was supposed to go to smoking cessation and pulmonary health programs,” John Jacobi, professor of health and law policy at Seton Hall Law School tells TIME — but not all of it did. At states’ discretion, a lot was instead used for things like plugging budget gaps and filling potholes, Jacobi explains.

So while most of the major litigation related to the opioids crisis has only just begun, there are already questions about where the money from lawsuits like the ones in Ohio may go. Jacobi says what happened with the money from settlements from tobacco litigation serve as a “cautionary tale,” and that verdicts like the one handed down in Oklahoma judgment should be used to effectively address drug and opioid addiction.

The over-prescription and distribution of opioids is still an important and serious problem but it is “very different” than what it was a decade ago, Jacobi says — prescription levels have dropped and steps are being taken to address the issue. He argues the government should focus on the general issue of addiction and deadly street drugs, like heroin and fentanyl, through funding public health programs that provide substance abuse treatment like Medicaid. 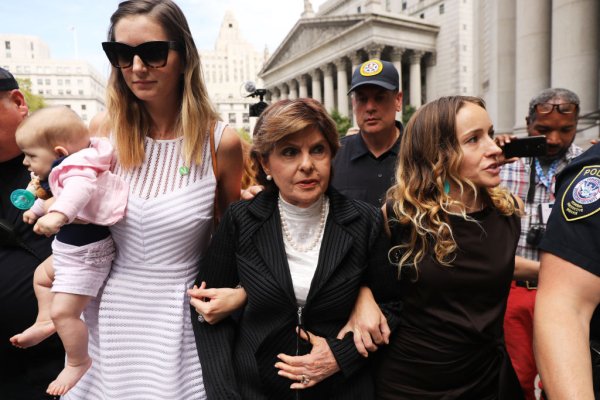 23 Epstein Accusers Finally Got Their Day in Court
Next Up: Editor's Pick