There's No Such Thing as a 'Gay Gene,' a New Study Argues

In 1993, researchers discovered a stretch of DNA on the X chromosome they believed to be linked to male homosexuality. In the years since, the concept of a “gay gene” has been a source of debate within both the scientific community and the general public, inspiring ever-larger follow-up studies over the years.

A new study published in Science, thought to be the most comprehensive on the topic, adds important information to that back-and-forth. After studying the DNA of nearly half a million people with varying sexual experiences, the researchers found no evidence of a single “gay gene.” There was some genetic association with self-reported same-sex sexual activity, but environmental factors likely play an even larger role, according to the study.

The researchers examined genotyping data and self-reported sexual histories from almost 500,000 (mostly white) people of both sexes who were either participating in genetic research projects, like the U.K. Biobank study, or had purchased genetic testing products from 23andMe and consented to inclusion in the study. Most participants came from the U.K. Biobank study, which involves adults ages 40 to 70, though the paper also included some young adults and adolescents participating in other studies.

Among the human genome’s approximately 30,000 genes, the researchers—who have previously presented research on this topic—found five variants related to same-sex sexual activity, though each one only minimally influenced an individual’s sexuality. Known genetic markers could only account for between 8% and 25% of the variation in sexual behaviors, they estimate. Environmental factors, which include everything from a person’s upbringing to where they live today, likely account for the rest.

Despite the genetic link, an individual’s genome cannot fully predict his or her sexual preferences, the authors say. “Individual-level prediction is not going to be a reality,” says study co-author Benjamin Neale, a geneticist at Massachusetts General Hospital.

The study did, however, provide some clues as to how genetics could relate to same-sex sexual behaviors. One variant, for example, was located on a stretch of DNA that’s also home to genes related to sense of smell, which previous research has suggested may be linked to sexual preferences. Another was related to a gene associated with male baldness, which suggests a possible link to sex hormone levels. The researchers also found genetic overlap with traits that could predispose people to mental health issues, which are disproportionately common in the LGBTQ community, and to risk-taking behavior, which could theoretically include sexual exploration. About 40% of the genetic connection to same-sex sexual activity was shared between sexes, while the other 60% was sex-specific, the researchers found.

“Same-sex sexual behavior is…very polygenic, meaning there are a lot of variants that contribute to this trait, and this is very similar to many other behavioral traits,” says first author Andrea Ganna, an instructor at Massachusetts General Hospital and Harvard Medical School.

The researchers emphasize that their study dealt primarily with sexual experiences, not sexual orientation or identity. While participants were asked if they’d had sex with someone of the same sex, they did not necessarily identify as queer. In fact, Ganna says the research suggests that measures like the Kinsey Scale, which argue that sexuality exists on a spectrum from totally gay to totally straight, are overly simplistic.

“From a genetic standpoint, there is no single continuum from opposite-sex to same-sex sexual behaviors,” Ganna says. “There is no dimension in which, the more someone is attracted to the same sex, the less they’re attracted to the opposite sex.”

The study leaves many questions unanswered, in part because it dealt with a fairly homogenous sample: people of European ancestry, many of whom came of age during a time when homosexuality was highly stigmatized or even criminalized. But Neale says the ambiguity is part of the point. 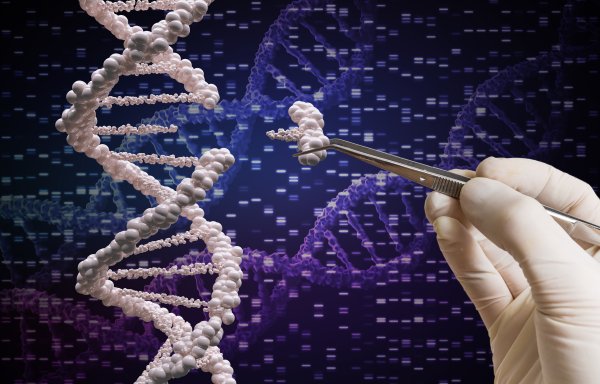 CRISPR Gene Editing Is Being Tested in Human Patients, and the Results Could Revolutionize Health Care
Next Up: Editor's Pick