People hold signs during a protest against recently passed abortion ban bills at the Georgia State Capitol building, on May 21, 2019 in Atlanta, Georgia. The Georgia "heartbeat" bill would ban abortion when a fetal heartbeat is detected. The Alabama abortion law, signed by Gov. Kay Ivey, includes no exceptions for cases of rape and incest, outlawing all abortions except when necessary to prevent serious health problems for the woman.
Elijah Nouvelage—Getty Images
Ideas
By Barbara Lee
Longtime Representative Barbara Lee has been a force on Capitol Hill for decades, first as a staffer and now as a member of Congress representing California’s Bay Area. Lee, who’s now in her 12th term, is one of the body’s most outspoken progressive lawmakers.

This summer, we saw the Hyde Amendment emerge as an issue among the Democratic presidential candidates. It was the first time many Americans had even heard about Hyde, and no one was talking about the real-life effects it had on low-income individuals.

I was a congressional staffer when the Hyde Amendment was introduced in the ’70s, and I said then what I’m saying now: this restriction is dangerous, discriminatory and will continue to harm women across the country.

The Hyde Amendment – named after Congressman Henry Hyde who introduced the policy in 1976 – denies women enrolled in Medicaid insurance coverage for abortion care except in the case of rape, incest or a threat to the woman’s life. And we know that a federal prohibition on using Medicaid and federal funds for a health care service – and yes, abortion is a health care service – disproportionately affects black and Latina women, young people, the LGBTQ community, immigrants and lower-income folks, preventing them from being able to make personal healthcare decisions that are best for them and their circumstances.

At the time it passed, Congressman Hyde made his true intention clear: “I certainly would like to prevent, if I could legally, anybody having an abortion, a rich woman, a middle-class woman, or a poor woman. Unfortunately, the only vehicle available is the…Medicaid bill.” Three years earlier, Roe v. Wade had recognized that everyone had the constitutional right to abortion, but the Hyde Amendment meant that not all women could exercise that right.

Medicaid is meant to ensure that low-income families can get health care they otherwise wouldn’t be able to access — at least not without forgoing basic necessities like heat and electricity in order to save the necessary funds — so for many, coverage can mean the difference between getting abortion care or being denied. When politicians place restrictions on Medicaid coverage of abortion, they force one in four poor women seeking an abortion to carry an unwanted pregnancy to term. And researchers have found that a woman who seeks an abortion but is denied is more likely to fall into poverty than one who is able to get an abortion.

Repealing the Hyde Amendment was once seen as a third-rail issue. When I first introduced the EACH Woman Act to repeal the discriminatory Hyde Amendment in 2015, I was told it was too divisive to ever gain any real support.

But I was not deterred. In fact, today our movement in Congress to repeal the Hyde Amendment has never been stronger. With the support of more than 100 reproductive health, rights and justice organizations and thousands of women of color across the country, the EACH Woman Act — which I, along with Congresswomen Jan Schakowsky and Diana DeGette, reintroduced this year — now has 164 co-sponsors.

I have also worked consistently to change the narrative around this issue. In 2016, I made sure that the Democratic Party platform included language in support of repealing the Hyde Amendment. The party’s platform position on “securing reproductive health, rights and justice” states that “every woman should have access to quality reproductive health care services, including safe and legal abortion—regardless of where she lives, how much money she makes, or how she is insured.” This year, almost all of the Democratic presidential candidates have made repealing the Hyde Amendment a key component of their campaigns.

It took decades to get us here, but here we are. Equal access to health care, including abortion, is now a standard for our party as it always should have been. Yes, our party can and should have diversity in thought, but limiting access for low-income people and people of color is not a place we have room to negotiate. I could not be more proud that our party, our presidential candidates and the majority of American voters believe that all women, including low-income women enrolled in Medicaid, should have health insurance that covers reproductive healthcare, including abortion.

The Hyde Amendment should be banished to the past like the relic it is. Times have changed – and it’s past time to keep up. 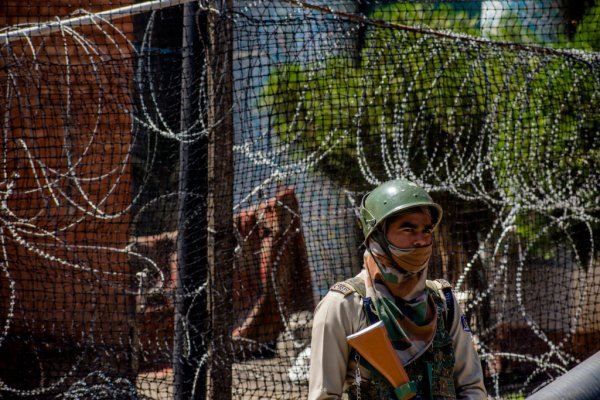 The Indian Government Insists All Is Well in Kashmir. But As the Communications Shutdown Continues, Its Citizens Are Struggling to Reach the Outside World
Next Up: Editor's Pick