Travelers walk past an advertisement for the People's Liberation Army (PLA) on a screen near the Luohu border crossing in Shenzhen, China, on Aug. 4, 2019.
Qilai Shen—Bloomberg/Getty Images
By TIME Staff

The Canadian Consulate in Hong Kong said Friday it has suspended official travel for local staff, following the detention of a U.K. Consulate employee during a trip to mainland China.

A spokesperson for the Canadian mission confirmed the new measure in an email to TIME, but did not elaborate on its reasons or the scope of travel restrictions.

“At present, locally-engaged staff will not undertake official business travel outside of Hong Kong,” the spokesperson said.

China’s foreign ministry confirmed Wednesday that an employee of the U.K. Consulate, Simon Cheng, had been detained in Shenzhen, a city bordering Hong Kong.

Cheng had reportedly been on a one-day business trip to the mainland when he disappeared on Aug. 8. Chinese state media accused him of soliciting prostitutes, a claim his family dismissed as “a made-up crime,” according to Agence France-Presse.

Hong Kong, a semiautonomous territory of China, has been wracked by almost three months of antigovernment protests sparked by a proposal to allow the extradition of fugitives to the mainland.

The extradition bill has since been suspended, but the protests snowballed into a movement calling for more democratic freedoms.

Beijing has accused the U.S., U.K. and other Western countries of being behind the unrest, warning foreign governments against meddling in its internal affairs.

Chinese authorities have reportedly heightened inspections at the busy customs crossing in Shenzhen, including searching travelers’ mobile devices for media related to the protests. 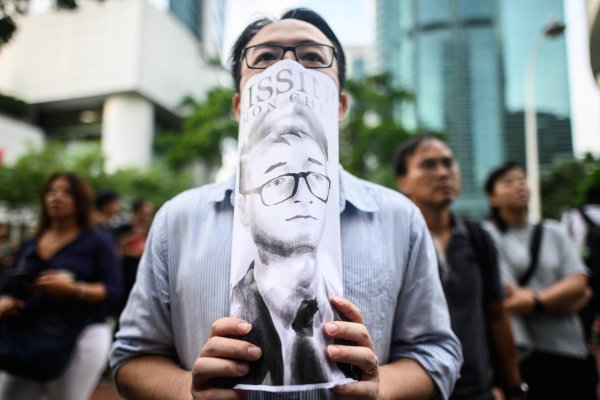 Fears Voiced for British Consulate Staffer Detained in China
Next Up: Editor's Pick