Taylor Swift is making the rounds ahead of the long-awaited release of her seventh studio album Lover and her fans are traveling with her. Hundreds of them camped out overnight on Wednesday to sing along with Swift during her Good Morning America appearance on Thursday morning and the singer made sure they were well-fed during their New York City camp out.

The “You Need to Calm Down” and “Archer” singer had 30 pizzas delivered to the devoted fans who spent the night outside New York City’s Central Park to get a glimpse of the star. The pies were all hand-delivered by members of Swift’s team, including her dad, Scott Swift, who also gave out promotional guitar pics and posed for selfies with his daughter’s ardent fans. The much-appreciated pizza delivery was well documented on on social media with fan accounts sharing the news of the surprise, and Good Morning America’s official Twitter account spreading the word of the singer’s pepperoni-topped largesse.

While hungry fans certainly appreciated the gesture, Swift herself was touched by her dad’s gesture. During her performance, Swift took a moment on the stage to thank her dad for being there for her, supporting her career, and helping her fans. “My dad was handing out pizza!” she said, according to People . “As a family, it blows our mind that people would want to do that. For our parents they’re like, ‘That’s my kid! People are waiting on the sidewalk to hear her sing!’ It’s really astonishing to us.”

It’s a good thing that Swift bought the pizzas last night, because according to GMA, if she had waited until morning, she would have had to buy a slice for over 3,000 fans who showed up to her Central Park concert. 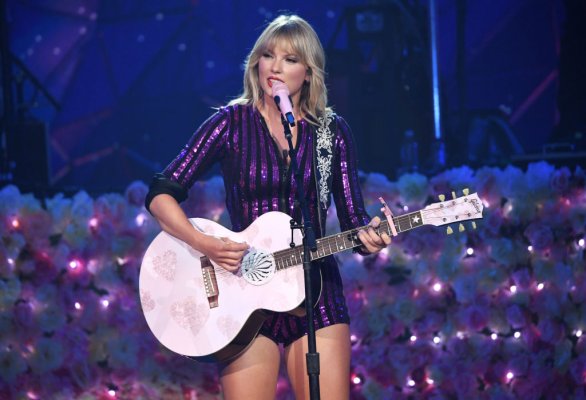 Taylor Swift's Third New Single "Lover" Is Finally Out
Next Up: Editor's Pick