About 2.5 Million Acres in Alaska Have Burned. The State's Wildfire Seasons Are Getting Worse, Experts Say

A helicopter passes by as smoke rises from a wildfire on July 3, 2019 south of Talkeetna, Alaska near the George Parks Highway.
Lance King—Getty Images
By Tara Law

Wildfires are a normal part of life in Alaskan forests. While the state is experiencing an “extreme” fire season this year, with over 2.5 million acres burned, the size of the fires is still well short of the record set in 2004 – 6.5 million acres.

But what’s worrisome, says Beth Ipsen of the Alaska Interagency Fire Information Office, is just how long this fire season has stretched on. The season started early, beginning on April 30 with the Oregon Lakes Fire. And while fires typically start to peter out in August, recently there’s been a major uptick. About 236 of the 663 fires that started this year are still burning in the state, and it’s not clear when they’ll start to fizzle out.

“This is not normal,” Ipsen tells TIME.

Record-breaking temperatures and dried-out vegetation has set the stage for major fires in much of central and southern Alaska this summer, scientists say. And while fire experts say that wildfires are a normal part of the life cycle of the state’s boreal landscape, major fire seasons seem to be more common – and to be stretching longer. For many Alaskans, the end of the fire season couldn’t come soon enough; many are coping with severe smoke conditions, and at least 50 structures were destroyed last weekend in the McKinley Fire in southern Alaska.

Scientists say that it’s likely that climate change not only plays a major part in causing the fires, but that the carbon being released as smoke might be making the warming effect worse.

This summer, Alaska cities and towns recorded some of their hottest temperatures on record. Anchorage experienced its first temperature above 90 degrees Fahrenheit. Scott Rupp, deputy director of the International Arctic Research Center at the University of Alaska- Fairbanks, says that part of the problem is that places closer to the poles are warming faster than the rest of the world.

Alaska is warming at about 2.5 times the rate of the lower 48 states, partly because when snow and ice melts, it leaves behind darker snow and water, Rupp says. In recent years, the start of the part the year without any snow has started about two weeks earlier in Alaska.

Fire seasons that see the burning of a million acres are not unusual, says Rupp, but “What has been changing is the frequency and the magnitude of these fires.”

Lightning sparks the majority of fires in Alaska. It caused about 361 of the total of 663 fires this year (about 291 of the rest are believed to have been caused by humans), according to Ipsen.

Bieniek says that in his most recent research, he’s found that thunderstorms are becoming more common in Alaska, and that the number of lightning strikes is expected to double by 2100.

Rupp says that agrees that there’s a likelihood that thunderstorms are getting worse. Unfortunately, he says, the fires themselves are creating a “positive feedback loop for the environment. Not only are the conditions for severe fire seasons becoming more common, but major fires pump greenhouse gases into the environment. Boreal forests are usually a “carbon sink” that absorbs carbon, but when they burn too frequently they can become a “carbon source.” 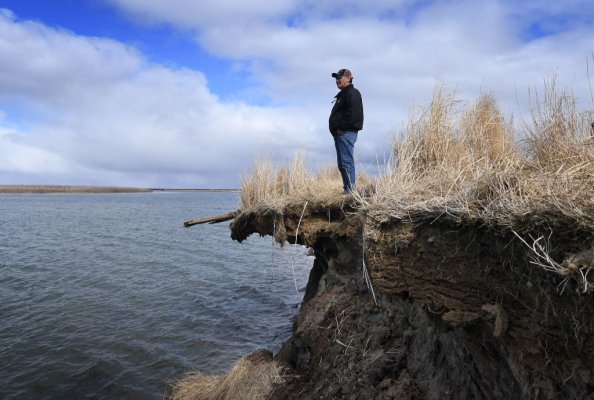 Alaska's Sea Ice Has Fallen to Its Lowest August Levels Ever
Next Up: Editor's Pick