'We Want to Change Things from Within.' Italy's Matteo Salvini on His Goal to Reshape Europe

Matteo Salvini may not be Prime Minister of Italy. But there’s little doubt the Italian interior minister is the most influential politician in the country. And if he gets his way, he could become one of the most powerful leaders in Europe.

Salvini heads the far-right nationalist League party, which won a record 17.4% of votes in elections last March, by pushing a virulently anti-immigration line. Having helped build a coalition with the anti-establishment Five Star Movement, he became interior minister with responsibility for national security, policing and immigration.

And on the latter issue, he has wasted no time in making his mark. He has attempted to suspend asylum procedures completely until the E.U. agrees on fair distribution of refugees. He has incensed E.U. leaders by blocking boats loaded with rescued migrants from docking in Italian ports—In August, for example, he refused to allow an Italian Coast Guard ship, the Diciotti, to disembark 177 migrants rescued in the Mediterranean.

This take-no-prisoners approach has won him fresh support in Italy; polls now suggest the League has support from 30% of voters. And he has only broadened his sphere of influence. On Sept. 7, Trump’s former campaign manager Steve Bannon visited Salvini to draw him into his new Brussels-based organization, which aims to tally big wins for right-wing populist parties in European Union elections next year.

Salvini now has nothing less than a reshaping of the political and economic bloc in his sights. “Changing Europe is a big goal,” he told TIME in an exclusive interview in his Rome office on Sept.4. “But I think it’s at our fingertips.”

The following transcript has been edited for length and clarity:

TIME: Imagine there is another incident like the Diciotti tomorrow. What will you do?

SALVINI: We are working on not having another case like that. But if will happen again, we will behave exactly the same way.

So you would not allow people to disembark on the shores of Italy. Is that what you’re saying? Because the European Union, and NGOs, are saying that is against Maritime Law, against human rights laws, against conventions that Italy has signed.

I am a father of two daughters, so even from the Diciotti we allowed children, sick people, women, to disembark. But stopping the smuggling of human beings is too important for us and for their future.

Le Figaro, the French newspaper, this weekend said you wanted “blow up the European Union.” Is that what you want to do?

No. No. On the contrary, I think that history will entrust us with the role of saving European values — from Judeo-Christian roots to the right to work, the right to security, the right to life. This union has grown too much, and too quickly, without common roots, only with a common currency. And so we are working to re-establish the European spirit that has been betrayed by those who govern this union.

So why not push to get Italy out of the European Union? You have vacillated on this issue. Many of your supporters I have spoken to said “we don’t want to be in the E.U.” Do you agree?

I choose to change things from within. That is probably more difficult, it is longer and more complicated but it is a more concrete solution. To work from within to change monetary, financial, agricultural, commercial, industrial policies. We are growing, and we are allying with other European countries to change the E.U. from within. If we leave, it would be the end of hope.

You have powerful forces against you, French President Emmanuel Macron, and German Chancellor Angela Merkel. Do you think you can make enough changes to satisfy your supporters that is worth being in E.U.?

I think so. We are working with friends from France, Germany, Poland, Romania, Bulgaria, Netherland, Belgium, Austria to create an alternative alliance to the Christian Democrat and Socialist duopoly that has always governed Europe. It is clear that I have to change the European dynamics to create a better place for Italians, French, Austrians and Spaniards.

The goal is to create an alliance without the Socialists, so without Macron, without [former Italian Prime Minister Matteo] Renzi. This alliance has to change the balance in the European Parliament and in the European Commission. I was elected secretary of the League four and a half years ago, and the party was at 3% in the polls. Today the polls give us 30%. So changing Europe is a big goal, but I think it’s at our fingertips.

Do you want to close the borders of Europe?

You are incredibly focused on immigration. Some would call it an obsession. Why are you so set on reining in immigration?

The biggest problem in Italy is work. And out-of-control immigration damages the labor market, because Italians can’t compete with illegal workers who are being exploited. So to restore dignity to work we must control immigration.

When you talk about crime and immigrants, people say that you’re a racist or a Nazi. It doesn’t seem to bother you.

Regular immigrants in Italy are five million, so 8% of the population. They are welcome. The problem is irregular immigration which brings crime and social conflict. If I could reduce the number of these crimes and the presence of illegal immigrants they can call me racist as much as they want. I’ll continue and people will still support me. Even the left-wing voters want more security and more rigor in this field. Otherwise it would not explain why Lega is getting 30% in the polls.

To many Americans you sound a lot like President Trump. He says “America First,” while your campaign slogan was “Italians First.” You went to meet him when he was a presidential candidate. How has he inspired you?

Obviously we are different countries, with different stories, different economies, and we are two different people. But I appreciated his proposals on security and especially on the economy, and the fact that he kept these commitments after the elections — even with hot topics, such as moving the capital of Israel to Jerusalem. I like the fact that he has kept the commitments made on the protection of the borders, on the tax reduction, on investment. The economic situation in the United States is absolutely positive.

I think that even if I am smaller and Italy is smaller I share with the U.S. President the attacks from the politically correct mainstream world: actors, singers, directors, journalists. And this means that we are working well.

You’re also a keen social media user, though on Facebook rather than Trump’s favored medium of Twitter. What have you learned from it?

At the beginning I did not even want to have Facebook. I installed WhatsApp a month ago to work at the ministry. But with social media I have direct personal contact. For example, the video I made in the mountains during the story of the Diciotti reached eight million people. That is a number far bigger than traditional media.

Do you agree with President Trump’s views that much of the mainstream media is what he calls fake news?

No. I think that people now have enough opportunities to get information: from the Internet, the radio, the newspapers and television. Information in Italy is unbalanced on the left-wing, but this has always been true, even if it does not affect public opinion any longer. I do not think there are conspiracies.

Do you think you and Trump are part of the same global movement?

So I think it’s a similar story. Not only in the United States and in Europe, but also in other places. The changes are in Russia, in China. It is a common factor: The confrontation of the people versus the elite.

Do you advocate ending sanctions against Russia? And do you regard Putin as an ally or not?

I have always said that sanctions are not used to achieve the purposes for which they were imposed and are an economic cost for Italy, Europe and Russia. I prefer dialogue to sanctions. I met Putin only once. There are no economic ties or commercial connection. I only have an idea of having a good partnership between Russia and Europe. There is an agreement between the League and [Putin’s] United Russia party. I hope to stop this regime of sanctions as soon as possible, because there is no need to fight.

President Putin actually said that, as it was translated in English, that he liked how things went after the elections in Italy. Do you think Russians interfered with voting like they apparently did in the U.S, France and Germany?

No, there was absolutely no interference, and no kind of media or economic link. They are looking for Russian hackers everywhere. Italians think with their heads. I do not know what and if they did something in America or in France. But from my point of view this story of Russian interference is ridiculous. Fake news is already distributed 24 hours a day by official Italian television companies paid by Italian taxpayers, and not by Russian hackers. I’ve never met a Russian hacker. I’d be curious to meet one.

Steve Bannon said that he’s advised you before the elections and you met for hours. He advised you to form the coalition with the Five Star Movement. What was your discussion with him? Was it helpful?

We spoke on the phone and we also met before and after the elections, discussing each other’s ideas. He has an interesting idea for the development of links between Western countries. Then obviously in Italy we have our sensibilities, our needs that are not always close to the ones of other countries. He has an interesting idea of future political development. I met him, and probably I will meet him again as I am lucky to meet other free thinkers, to broaden my horizons.

We are coming up to the E.U. elections next May. What is your bottom line demand going to be in this E.U. campaign? And what if you don’t get what you want in Brussels? What kind of leverage do you have?

Italy is the second European industrial power, a founding member [of the E.U.]. We are 60 million. We pay 6 billion [Euros] a year to the European budget. So I think we have good reasons to be heard. We will be heard because Europe does not exist without Italy.

Others have tried and failed. What is your plan B?

It’s always bad luck to reveal the B plan. I will keep it for the next interview.

SALVINI: No. We want to change things from within. 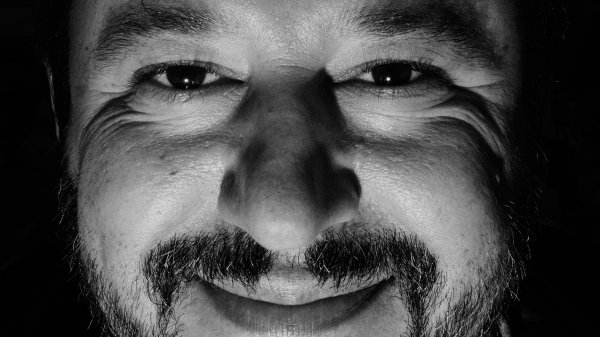 Why Italy's Matteo Salvini Is the Most Feared Man in Europe
Next Up: Editor's Pick