Daniel Pantaleo, the New York City police officer who fatally choked Eric Garner, has been fired — more than five years after Garner’s death prompted widespread outrage over police brutality and his final words — “I can’t breathe” — became a rallying cry for protesters across the country.

“I stand before you today confident that I have reached the correct decision,” New York Police Commissioner James O’Neill made the announcement at a press conference Monday. “It is clear that Daniel Pantaleo can no longer effectively serve as a New York City police officer.”

Earlier this month, on Aug. 2, Pantaleo was suspended from the police department following a disciplinary trial judge’s recommendation that he be fired.

Garner’s case prompted widespread outrage after the release of video footage of Pantaleo holding Garner down in a chokehold while attempting to arrest him on July 17, 2014. Garner, who was facing arrest for allegedly selling loose cigarettes, was repeatedly heard saying, “I can’t breathe,” as officers forced him to the ground. Garner died just weeks before Michael Brown was fatally shot by a police officer in Ferguson, Mo. Both cases sparked a movement for calling for police reform, and fueling a national debate over race and police use of force.

The New York City medical examiner’s office later said Garner’s death was a homicide caused by neck compressions — compressions believed to have been caused by the chokehold. During Pantaleo’s disciplinary trial in May, the doctor who conducted Garner’s autopsy testified that the combination of the chokehold and chest compressions caused a “lethal cascade” of events that ended in a fatal asthma attack, according to the New York Times.

While the decision marks the end of a chapter for Pantaleo and the Garner family, both sides have vowed that it’s not over. For Pantaleo, his lawyer Stuart London said a press conference that Pantaleo will file an appeal over his termination (Police Benevolent Association President Patrick Lynch also criticized the move, saying the commissioner “has chosen politics and his own self-interest over the police officers he claims to lead”). For the Garner family, Eric’s daughter Emerald Snipes Garner thanked O’Neill for “finally” making his decision, but added that it “should have been made five years ago,” Snipes Garner added that she would like to see other officers involved held accountable, as well as lobbying for the passage of what Garner’s family call the “Eric Garner law,” which would ban police chokeholds entirely.

“We weren’t expecting for [Pantaleo] to actually be fired,” Snipes Garner tells TIME. “Of course we wanted it but we were trying to be realistic.”

“We’ve had to relive the moment (Eric Garner’s death) constantly for the past five years but we pushed through and have spread awareness about police brutality.” She also believes that this firing will be a wake up call to other officers. “I think that police officers will begin to think twice about what they’re doing and follow the correct procedure,” she says.

In a separate press conference, Garner’s mother, Gwen Carr, thanked supporters, saying “it’s been five long years that I have fought this fight. I have not fought it alone.”

The decision could have ripple effects for years. Michael Avery, the president of the National Police Accountability Project, said that this decision should be an example for other police departments. “I hope that this will become a pattern going forward,” Avery tells TIME. “I hope that other police chiefs and other police commissioners will follow this in the future. When a finding is made by an administrative body within a police department that an officer has violated policy then there should be a consequence.”

“This one case can’t change everything, but it is a signal to the community,” Henry Smart III, a professor at John Jay College of criminal justice tells TIME. “I think this will promote dialogue between community members and police officers, as opposed to the us versus them scenario that we’ve been operating on.” While acknowledging there is more work to be done — citing a need for more equitable law enforcement for all citizens, and that officers cannot discriminate based on race or social economic status — Professor Smart also praised commissioner O’Neill. “You have to give this commissioner credit for doing something beyond the status quo that we expect from the NYPD.”

“Being for police accountability is not mutually exclusive with supporting our men and women” on the NYPD, New York City’s Public Advocate Jumaane Williams said.

However, Avery also pointed out that these decisions could be followed by blowback from police unions and officers. “If you look at the statement that was made by the PBA president [after Pantaleo’s suspension was announced], he’s virtually inviting police officers not to do their jobs in the future,” Avery says. “I think that’s the height of irresponsibility.” (In that statement, Lynch described the decision as “political insanity” and argued it left officers feeling “expendable.)

People attend a vigil for Eric Garner near where he died after he was taken into police custody in Staten Island last Thursday on July 22, 2014 in New York City.
Spencer Platt—Getty Images

Five years of investigations and controversy

O’Neill’s verdict marks his first confirmed punishment as an officer.

In December 2014, a Staten Island grand jury decided against indicting Pantaleo on criminal charges, saying they found “no reasonable cause” to do so, sparking protests nationwide. Less than a year after this decision, in July 2015, Garner’s family settled a wrongful death lawsuit against the city for $5.9 million.

Three years after the settlement, in July 2018, the NYPD approved the enacting of disciplinary proceedings against Pantaleo, saying it had lost patience with the federal process, the Associated Press reported.

Last month, federal prosecutors also said they would not bring civil rights charges against Pantaleo, noting that the evidence “does not establish beyond a reasonable doubt that Officer Pantaleo acted in willful violation of federal law.” The NYPD’s disciplinary trial finally began in May 2019, culminating in Maldonado’s recommendation of termination.

The ultimate decision came down to O’Neill after Deputy Commissioner of Trials Rosemarie Maldonado recommended he be fired. Maldonado had been tasked with determining whether Pantaleo used a chokehold on Garner — a move banned by official police policy. She found that he did, but noted in her 45-page report that a lot of the contact with the neck was “accidental and unintentional.” Fred Davie, chairman of the Civilian Complaint Review Board, which acted as a prosecutor at Pantaleo’s department trial last spring, took Maldonado’s recommendation to imply that his argument at trial was correct: Pantaleo’s chokehold did, in fact, cause Garner’s death.

Activists participate in a protest to mark the five year anniversary of the death of Eric Garner on July 17, 2019 in New York City.
Spencer Platt—Getty Images

Swift reactions from all sides

De Blasio, who is running for president, has received criticism during his campaign for the way the city handled the Garner case. Activists protesting the incident interrupted the second Presidential debate in July. In a statement released on Monday, the Legal Aid Society critiqued de Blasio’s role, saying that “the Mayor’s legacy will have to bear this stain and all of its costs forever.” Their statement added:

Echoing Snipes Garner and other police reform activists, Legal Aid also called for the other officers involved in Garner’s arrest to be fired.

Donna Lieberman, the Executive Director of the ACLU NY, released a statement saying that the firing of Pantaleo “affirms what we all know: Pantaleo used excessive force on an unarmed Black man and is not fit to serve as a police officer.”

“While this is some measure of long-overdue relief, we have a long way to go to achieve true police accountability,” Lieberman said in the statement. “The NYPD must take further steps to rebuild trust between officers and the communities they serve, put an end to police brutality against communities of color, and ensure what happened to Eric Garner will never happen again.”

“The most important thing we can do to change is to never have the tragedy again,” de Blasio said. “We have to do everything that we possibly can do to avoid there ever being another tragedy.”

New York Rep. Jerrold Nadler, chairman of House Judiciary Committee released a statement also noting O’Neill’s verdict “should not have taken so many years for such a limited measure of justice.”

“The House Judiciary Committee will hold hearings and consider legislation this Congress to strengthen police-community relations,” Nadler continued. “We must continue to work at every level of government, within our local police departments and on the ground in our communities to ensure positive change.” 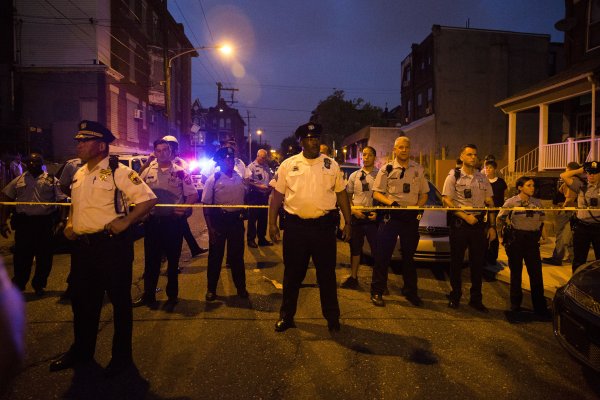