Officer in Eric Garner Death Fired After NYPD Investigation. Here's What to Know About the Case

The New York City police officer who wrestled Eric Garner to the ground as the 43-year-old father of six repeatedly gasped “I can’t breathe” was fired Monday, nearly three weeks after a judge recommended he lose his job over the controversial death.

The case sparked national outrage after officer Daniel Pantaleo was captured on video holding Garner down in a chokehold during an attempted arrest in Staten Island, N.Y. on July 17, 2014. Garner, who refused to be handcuffed after being accused of illegally selling loose cigarettes, died after saying he couldn’t breathe 11 times as officers forced him to the pavement. His final words became a rallying cry across the U.S. for advocates of police reform amid growing tensions over law enforcement killings of unarmed black men, which continue to have reverberating effects on the 2020 presidential election.

At a news conference Monday, NYPD Commissioner James O’Neill announced Pantaleo’s immediate termination, which was the harshest punishment Pantaleo faced after a grand jury and federal prosecutors both declined to bring charges against him. The decision followed an administrative judge’s verdict after Pantaleo’s departmental disciplinary trial. “It is clear that Daniel Pantaleo can no longer effectively serve as a New York City police officer,” O’Neill said, adding that he took “no pleasure” in the firing.

Here’s what to know about the case.

What has happened to Daniel Pantaleo so far?

Pantaleo was suspended without pay for a month after an administrative judge recommended he be fired on Aug. 2. The suspension was customary when a departmental disciplinary trial results in a recommendation of termination, the NYPD said in a statement. Before the suspension, Pantaleo had been on desk duty, collecting a salary of about $85,000 a year.

Patrick Lynch, president of the city’s police union, slammed Pantaleo’s firing on Monday, saying the commissioner chose “politics and his own self-interest over the police officers he claims to lead.” “The NYPD will remain rudderless and frozen,” Lynch said, “and Commissioner O’Neill will never be able to bring it back.”

Pantaleo, who has denied using excessive force in Garner’s case, was never charged in the death. In 2014, a grand jury found “no reasonable cause” to indict him on criminal charges. And last month, federal prosecutors announced they would not bring civil rights charges against him. While calling Garner’s death a tragedy, U.S. Attorney for the Eastern District, Richard Donoghue, said the evidence “does not establish beyond a reasonable doubt that Officer Pantaleo acted in willful violation of federal law.”

Nationwide, police officers are rarely indicted for killing civilians, whether accidentally or intentionally.

What happened in the Garner case so far?

In 2014, the New York City medical examiner’s office said Garner’s death was a homicide caused by neck compressions from an apparent chokehold. During Pantaleo’s disciplinary trial in May, the doctor who conducted Garner’s autopsy testified that the force of the chokehold and chest compressions caused a “lethal cascade” of events that ended in a fatal asthma attack, according to the New York Times.

The Garner family settled a wrongful death lawsuit against the city for $5.9 million in 2015, but have never stopped seeking justice. On Aug. 2, before the judge rendered a verdict, Esaw Garner Snipes, Garner’s widow, called for “civil unrest” if the recommendation was not for the Pantaleo’s termination. “We’re not going to stop,” she said in an interview with CNN. A petition the family started calling for Pantaleo’s termination has received more than 140,000 signatures.

Why has New York City Mayor Bill de Blasio come under fire for his role in the case?

Garner’s family and supporters have long criticized New York City Mayor Bill de Blasio, who is currently running for president, for how he handled the case and for failing to use his apparent powers as the city’s leader to ensure Pantaleo was fired. At a live and nationally televised Democratic debate in Detroit earlier this month, protesters heckled de Blasio to fire Pantaleo, which disrupted the event and forced the mayor to address the case.

“I know the Garner family. They’ve gone through extraordinary pain,” he said. “They are waiting for justice and are going to get justice. There’s finally going to be justice. I have confidence in that, in the next 30 days, in New York.”

The mayor also said the Justice Department’s recent decision not to pursue charges was “an injustice of the highest order,” but declined to say whether Pantaleo should be fired especially before knowing the police commissioner’s determination. “I’m not going to venture personal opinions,” de Blasio said, according to the Associated Press. “When you’re the steward of the entire city, this is not about personal opinions.”

At an Aug. 2 news conference, which was also briefly interrupted by hecklers, the mayor mostly echoed his remarks from the debate, but added he believes that the justice system is now working after the judge’s recommendation. “Until today, the Garner family has been failed by this entire process,” he said. “I hope that this will now bring the Garner family a sense of closure and the beginning of peace.”

When asked whether he has the power to order Pantaleo’s termination, de Blasio said “there has to be due process.” 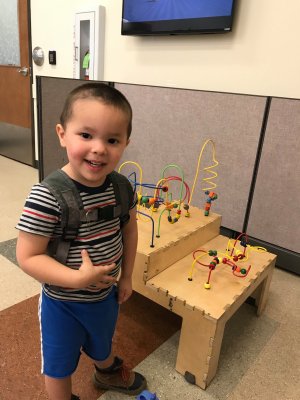