A Philadelphia Lawyer Was Watching the Police Standoff on TV. Then the Gunman Called Him: 'I Need Your Help'

Then, his phone rang.

It turned out “that guy,” the one who was allegedly holding police at bay with an AR-15 assault rifle, was his former client and friend Maurice Hill.

“There was no part of me at all that thought that [the shooter] could in any realm of possibility be him, but the level of despair he had in his voice and the way that he sounded, it just was like, ‘Wait a minute, are you kidding me?’ I didn’t even have to ask ‘What are you talking about?’ I just knew,” Johnson tells TIME.

Over the next three and a half hours Johnson, 36, proceeded to negotiate an end to the 8-hour police standoff that had gripped the country and sparked conversation about gun violence and whether America was going too easy on offenders with a lengthy record. President Donald Trump weighed in on the violence, saying the shooter “should never have been allowed to be on the streets.” So did the National Rifle Association, along with the local U.S. Attorney.

On Thursday, authorities revealed that Hill has a criminal record dating back to the early 2000s up to 2012, which included burglary charges, illegally taunting a police animal, aggravated assault, drugs, DUI, reckless endangerment perjury, robbery and various gun charges. He had served time in prison and was under federal supervision up until 2016.

To keep Hill calm and get him out alive, Johnson called Philadelphia District Attorney Larry Krasner — who in turn called Police Commissioner Richard Ross Jr. Together, the four of them –– the two most senior law enforcement officials in one of America’s biggest cities; Johnson, a former cop-turned-criminal defense lawyer; and Hill, a convicted felon who allegedly opened fire on officers with an assault rifle –– ended the hours-long standoff with no further injuries, and no one killed.

“You got a politician, then you got a police chief who has constituents in terms of his subordinate police officers who have been shot and wounded –– they’re looking for their leader for some guidance on this, on how to respond and you’ve got a defense attorney, and then you got a man who feels like a rabid squirrel inside a cage all on the same phone call,” Johnson says.

Hours earlier, Hill opened fire and then engaged in a gun battle with Philadelphia police who were serving a narcotics arrest warrant at a home near 3700 N. 15th Street around 4:30 p.m., authorities said. The operation “went awry almost immediately,” Ross told the Associated Press, and officers soon found themselves forced to escape from “a barrage of bullets.”

Two officers were trapped in the building during the standoff, along with three civilians who had been apprehended during the initial raid. Outside, six officers were hospitalized with non-life-threatening injuries. The gunfire left the surrounding neighborhood paralyzed for hours, including a nearby daycare packed with children and employees that was put on lockdown, the Philadelphia Inquirer reported.

Johnson says that when Hill called, he was convinced that police were going to kill him.

“I said, ‘I don’t know if that’s their goal but they’re not above it, they’ll do what they think they need to do, so you have to come out of there peacefully,’” Johnson says.

Hill was calm over the phone, which in turn allowed Johnson to be calm, as well. Mostly, Hill sounded “resigned to the fact that this was going to end badly,” he says.

“And that’s when I invited him to let me get Mr. Krasner on the phone, almost playing my trump card if you will, letting him know, ‘Listen ––we know people too.’ Let him get some hope he can get out of this situation fairly,” Johnson says.

Krasner, the prosecutor, told reporters on Thursday that he was only involved in the negotiation because Johnson called him. He had no idea what the call was going to be when he answered it. “I did what I could, I am no hostage negotiator,” he said. “I have no such training, neither does Mr. Johnson, but we were doing what we could to lower the volume, to bring more calm about and bring him to a more rational position.”

Ross, the police commissioner, told reporters on Wednesday that it took hours before authorities were able to make a breakthrough with Hill.

“I have to admit, I did not think that this guy was going to come out alive,” Ross said. “But after several conversations with him and hearing a bunch of information throughout the afternoon he was indicating he was not going back to prison, so he was not coming out alive, but it took several hours to make any reasonable contact with him.”

By about 11:45 p.m., after more than three hours on the phone with Hill, police allowed Johnson to get near the crime scene. He stood outside the door to the building where Hill was holed up and spoke to him with a megaphone while wearing a bulletproof vest.

Police promised Johnson that if Hill was apprehended without injury, that he would be able to speak to Hill before he was taken into custody. Shortly after midnight Thursday Hill emerged from the building with his hands up.

The arrest still was not without incident. Police said that Hill had a handgun on him when he surrendered.

After Hill was arrested, Johnson says he was able to spend a few minutes with him in the back of the police van. They spoke and then hugged.

“It wasn’t like a high-five like we had done something amazing,” he says. “It was more like ‘You made it out. You had the least amount of probability of making it out of this scenario without being shot and here you are: No one died, lots of rounds, heavy artillery, long guns short guns, and no one’s dead.’ That was the hug.”

Johnson, who says he has not slept since the incident, is still trying to process exactly how he feels.

“I’m just going to be very truthful –– I don’t know how I feel right now,” he says, “I was relieved because a friend of mine is still alive and although his life going forward will be different, he’s still alive, his kids can see him, at least this did not end tragically. The other thing is, at that moment as soon as he was apprehended, I thought ‘Oh my god, what if they would have killed him?’ He was on my phone on speakerphone… if I had listened to my friend get killed by cops, what would that do to me going forward?”

Johnson says that despite allegedly shooting six police officers and opening fire on others, he doesn’t believe Hill is bad, and described him as “a character, sort of a life of the party kind of guy.”

“I would say he is a decent person by my account who behaved badly on a particular day,” Johnson says. “I can assure you unlike other stories we’ve seen nationwide this is not a plan or plot, he did not walk into anybody’s school, he didn’t have a AR-15 or an assault rifle under his trench coat, he didn’t have a pipe bomb or calculate any nefarious plan.”

No charges have been brought yet, but Krasner said it was “obvious” Hill will be charged with attempted murder, aggravated assault in the first degree and serious firearm charges.

If convicted, Krasner said it’s likely the Hill would spend the rest of his life in prison. 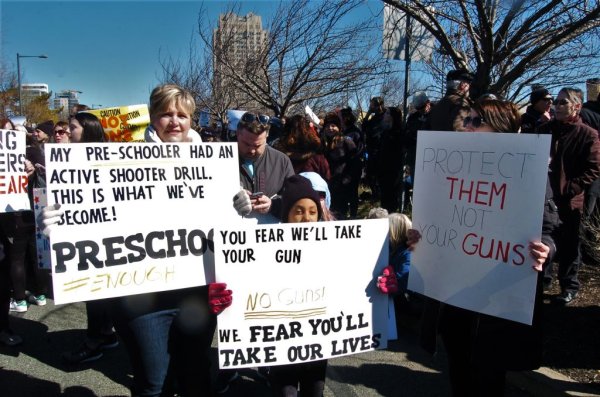 How Likely Is the Risk of Being Shot in America? It Depends
Next Up: Editor's Pick