The USWNT Seeks Nearly $67 Million in Damages In Equal Pay Lawsuit Against U.S. Soccer. Here's What to Know About the Case

United States' forward Megan Rapinoe looks on during warm up prior to the France 2019 Women's World Cup semi-final football match between England and USA, on July 2, 2019, at the Lyon Satdium in Decines-Charpieu, central-eastern France.
FRANCK FIFE—AFP/Getty Images
By Mahita Gajanan

The U.S. Women’s National Soccer team seeks nearly $67 million in damages as part of its gender discrimination lawsuit against the U.S. Soccer Federations.

Documents filed Thursday with the U.S. District Court in Los Angeles by both the USWNT and the U.S. Soccer Federation ask for a summary judgement ruling in each side’s favor, in an effort to avoid going to trial.

The USWNT says the U.S. Soccer Federation used “gender stereotyping” in deciding how much players would be paid in arguing for almost $67 million in backpay, according to the filings.

The documents also included the separate collective bargaining agreements for each team, which showed how the pay structures for each team differ. Selected depositions from members of the USWNT were also included in the filings. U.S. Soccer cited the separate contracts as their reasoning for the pay disparities in a statement to the Associated Press.

“Women’s national team players are paid differently because they specifically asked for and negotiated a completely different contract than the men’s national team, despite being offered, and rejecting, a similar pay-to-play agreement during the past negotiations,” the federation said.

“In the most recent CBA negotiations, USSF repeatedly said that equal pay was not an option regardless of pay structure. USSF proposed a “pay to play” structure with less pay across the board,” Levinson said. “In every instance for a friendly or competitive match, the women players were offered less pay than their male counterparts. This is the very definition of gender discrimination, and of course the players rejected it.”

Players with the USWNT sued U.S. Soccer in March, accusing the federation of not compensating or treating them in a manner equivalent to what the men’s team received. Mediation efforts last August broke down quickly last August, with Levinson saying at the time that they ended the meetings “sorely disappointed in the federation’s determination to perpetuate fundamentally discriminatory workplace conditions and behavior.”

She added that the ongoing dispute over pay disparity is likely to end up in a trial.

“It is clear that USSF, including its Board of Directors and President Carlos Cordeiro, fully intend to continue to compensate women players less than men. They will not succeed,” Levinson said. “We want all of our fans, sponsors, peers around the world, and women everywhere to know we are undaunted and will eagerly look forward to a jury trial.”

Representatives for U.S. Soccer did not immediately respond to TIME’s request for comment. In a statement to CNN, the organization said, “We have said numerous times that our goal is to find a resolution, and during mediation we had hoped we would be able to address the issues in a respectful manner and reach an agreement.”

Here’s what to know about the USWNT’s ongoing fight for equal pay.

In a class action lawsuit filed in March and signed by 28 players on the USWNT, the women allege that they are consistently paid less than the players on the men’s team and discriminated against because of their gender, despite a strong performance record.

The lawsuit was part of a years-long battle between the USWNT and U.S. Soccer regarding equal pay and gender equality. In 2016, five of the team’s players filed a complaint over unequal pay and bonuses with the federal Equal Employment Opportunity Commission (EEOC). In 2017, the players signed a new collective-bargaining agreement with the soccer federation and won control over some licensing and marketing rights. But the USWNT says that agreement did not go far enough.

“Despite continued discrimination, we do feel like we have made progress toward a more collaborative way of operating. And yet, while we made progress in our compensation terms, we were still unable to achieve equal treatment with the Men’s National Team in the CBA we ratified in April 2017,” they wrote in a letter to the federation Monday ahead of the mediation.

Now, following years of frustration between the players and the federation, the USWNT is pointing to their successes and widespread popularity as one factor in the push for equal pay. They’ve won four of eight World Cup titles since the championship games began in 1991 and four Olympic gold medals since the first women’s soccer tournament in 1996.

In their letter to U.S. Soccer, the women’s team pointed to their “remarkable” success during the 2019 World Cup. “We witnessed higher revenue numbers, higher ratings, more fans, more enthusiasm,” the players wrote. “The tired, arcane, irrelevant arguments and protestations of the male-dominated soccer world fell apart during those weeks.”

They added: “For both parties, the risk of not resolving our disagreements over equal treatment that were not addressed either in bargaining or through the EEOC is too high.”

What U.S. Soccer has said

In an open letter issued after the lawsuit was filed, the U.S. Soccer said it surprised by the complaint and that it had increased its investment in the women’s team in recent years.

U.S. Soccer denied the women players’ claims in a court filing in May, saying the gap in pay stems from “differences in aggregate revenue generated by the different teams and/or any other factor other than sex,” arguing that the men’s and women’s teams are “physically and functionally separate organizations,” the Washington Post reported in July.

After the World Cup, U.S. Soccer hired two lobbying firms in Washington D.C. to deny the claims of unequal pay in front of Congress, which sought to require the federation to pay both teams equally, according to a Politico report. While the U.S. government does not fund U.S. Soccer, the USWNT’s fight over equal pay has attracted attention from lawmakers. More than 50 members of Congress sent a letter to U.S. Soccer decrying the unequal treatment alleged by the USWNT. West Virginia Sen. Joe Manchin tied the equal pay issue into a bill he introduced that would withhold federal funding for the men’s 2026 World Cup, which will be held in the U.S., Mexico and Canada, until the pay dispute was resolved.

U.S. Soccer’s move to hire lobbyists was criticized by both the mens and women’s teams.

At the end of July, U.S. Soccer president Carlos Cordeiro argued that the women’s team has actually been paid more than the men’s team, saying that the federation paid the USWNT $34.1 million in salaries and game bonuses, while the men received $26.4 million. The figures, compiled by U.S. Soccer and based on an analysis by the federation’s staff, did not include the benefits, such as health care and a 401(k), that female players get. (Men are not provided the same benefits, according to the federation). U.S. Soccer’s numbers also included National Women’s Soccer League salaries that U.S. Soccer pays, which were negotiated in the 2017 CBA. (The federation does not pay Major League Soccer salaries).

How women players are compensated compared to the men

This is where things get very complicated. While the issue of establishing equal pay between the two teams seems like a matter of adjusting some numbers, the collective bargaining agreements for the men and women players detail differing pay structures.

Gabe Feldman, a sports law professor at Tulane University, tells TIME it’s not that unusual that the mediation attempt ended unsuccessfully. “Many equal pay cases are complicated and are difficult issues to prove,” he says. “In many cases, the fight is over whether the jobs are similar, not over the level of pay. In this case, both questions are difficult: Are the jobs similar and is the pay equal? Are there factors other than gender leading to pay difference?”

Making a direct comparison between how much the men earned versus the women is difficult because of the different contracts signed by men and women players and other factors that come into play, according to Feldman. Among other things, players factor in the number of games they play, which tournaments they play in, the popularity of soccer in general and the money they make outside of soccer through sponsorships or other work to determine what they think is a fair amount to make, he says.

Women players under contract earn a base salary of $100,000 and can earn some bonuses based on game performance. Players on the men’s team only earn bonuses.

In the USWNT’s lawsuit, compensation models showed that if both teams won 20 games in a row, women would make 38% less than their male counterparts. That calculation was based on the women’s team’s prior collective bargaining agreement, which expired in December 2016. The Washington Post, which ran the numbers based on the new collective bargaining agreement that became effective in April 2017, found that if the women’s team won 20 games in a row, a player would earn $28,333 less, or about 89% of what a male player would make.

The Post noted that were both teams to lose all 20 games, they would make the same amount because the men receive a $5,000 bonus for losing and the women have a base salary.

Compensation changes even further when it comes to the World Cup—though the pool money at stake here is set by FIFA, which gives prize winnings to the national federations behind each soccer team. For the Women’s World Cup, prize money totaled to $30 million in 2019, according to the Post. The USWNT earned about $4 million for winning the tournament. By contrast, the prize money pool for the 2018 Men’s World Cup totaled about $400 million, giving reigning champion France’s men’s team $38 million—more than the total pool for the women.

U.S. Soccer offers bonuses to each team based on different wins throughout the World Cup tournament. The USWNT players each received about $250,000 in bonus payment for the World Cup, according to the Times. Under the men’s team’s collective bargaining agreement, players receive $3,000 more if they lose a Wold Cup qualifying match than what women earn for winning, the Post reports.

Carli Lloyd #10 of the United States celebrates her goal with Tobin Heath #17 and Crystal Dunn #19, to take a 3-0 lead over the Republic of Ireland, during the first half of the first game of the USWNT Victory Tour at Rose Bowl on August 03, 2019 in Pasadena, California.
Harry How—Getty Images

What will happen next in the USWNT equal pay lawsuit

The case is likely to be settled in a trial, according to Feldman. U.S. Soccer will be responsible for proving that any gaps in pay are a result of “good faith negotiation,” Feldman says. U.S. Soccer will try to make the case that the pay gap boils down to the two different collective bargaining agreements agreed to by each team under their separate players’ associations, he says. They will have to show that the current situation is “just a product of collective bargaining.”

U.S. Soccer and the USWNT disagree both on how much the players get paid and on how such payments are quantified when compared with what male players receive. “The federation says, among other things, that it’s apples to oranges,” says Feldman. “There is not one right answer to what is fair—the answer is in what they agreed [in the collective bargaining agreements]. It’s not like a math formula will give you the right amount.”

For the women players, he says, the challenge will be to prove that the gaps are a product of gender discrimination.

“One of the threshold issues is that there’s no agreement on what the relative levels of pay are,” Feldman says. “[U.S. Soccer] claims the women are making just as much if not more than the men. They have to prove they are getting paid less and then prove that the disparity is attributable to gender discrimination and not other gender neutral factors.” 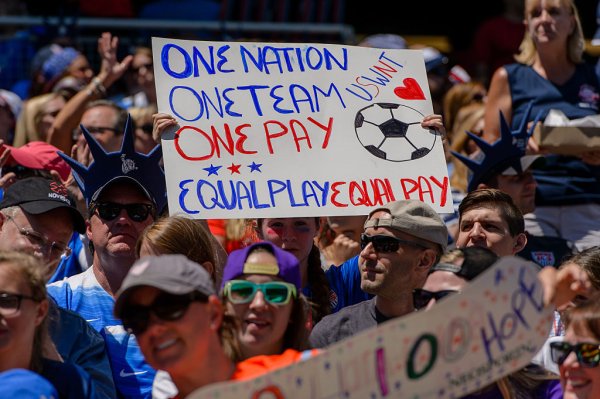 Rapinoe Criticizes U.S. Soccer After Talks Break Down
Next Up: Editor's Pick