Bruce Springsteen has been a worldwide, stadium-filling superstar for so long now that it’s easy to forget that many of us first heard his music in far more intimate settings, spinning on a record player late at night or rushing through a set of earphones like a private, secret symphony. Blinded by the Light, directed by Gurinder Chadha (Bend It Like Beckham) and adapted from a memoir by Sarfraz Manzoor, reminds us that the whole point of art, and of music, is its power to reach us in deeply personal ways. Javed (played by charismatic newcomer Viveik Kalra) is a British-Pakistani teenager growing up in the dead-end town of Luton, circa late 1980s. He’s dying to get out; getting good grades and going off to university is his best hope. He also writes poems and stories–one of the former is titled “Luton Is a Four-Letter Word”–though that enterprise is frowned upon by his father Malik (Kulvinder Ghir), who controls his family by forcing them to conform to strict Pakistani cultural conventions.

Then Javed discovers Springsteen’s music, songs about being held back by small-town thinking, of wanting to take a wrong turn and just keep going. He’s astonished at the songs’ almost mystical connection with his own life, which only gets harder: Malik loses his job, and Javed’s mother Noor (Meera Ganatra, in a gorgeously subtle supporting performance), an at-home seamstress, is forced to take in almost more work than she can bear. Meanwhile, Britain’s National Front menaces Javed’s neighborhood: it’s bad enough to feel out of place in your own family, without hatred and bigotry threatening that family’s right to exist in the first place.

Javed has to learn that no one’s music can solve all his problems, and the movie winds up in a place that’s easy to predict beforehand. But that hardly matters. Chadha uses Springsteen’s music in vivid, creative ways–for instance, projecting the lyrics of “Promised Land” in swirling letters against a sand-colored brick wall, as Javed, feeling imprisoned in his own skin, his own life, is pinned against it by a buffeting windstorm. Joyous and funny even as it strikes the occasional melancholy chord, Blinded by the Light is a testament to the small miracle of how the right music manages to find us at just the right time, even when it has to travel from New Jersey all the way to that four-letter word, Luton. 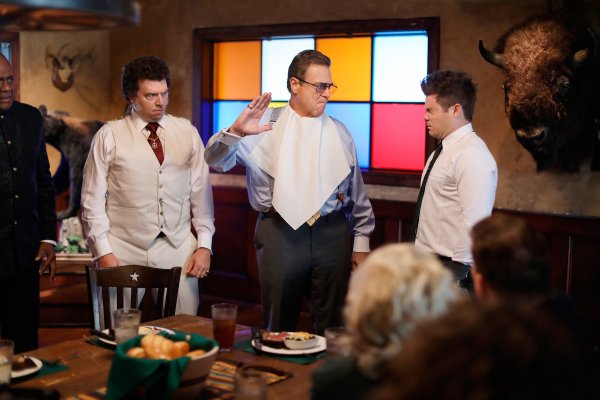 Danny McBride's Televangelist Comedy The Righteous Gemstones Is All Cheap Shots and No Insights
Next Up: Editor's Pick