Gun Safety Measures Have Momentum Right Now. That May Change Before Congress Comes Back

People pray and pay their respects at the makeshift memorial for victims of the shooting that left a total of 22 people dead at the Cielo Vista Mall WalMart (background) in El Paso, Texas, on August 6, 2019. - US President Donald Trump on Monday urged Republicans and Democrats to agree on tighter gun control and suggested legislation could be linked to immigration reform after two shootings left 30 people dead and sparked accusations that his rhetoric was part of the problem.
MARK RALSTON—AFP/Getty Images
By Alana Abramson and Philip Elliott

The back-to-back mass shootings in El Paso and Dayton prompted yet another start to this cycle. But this time, there were the slightest of hints that this time might be a little different. President Donald Trump and Senate Majority Leader Mitch McConnell, both Republicans, have indicated that guns will be, in the words of the latter, “front and center” — but not until September, when Congress returns.

That upcoming five week stretch, however, could stall that effort. In those intervening weeks, if history is any indication, calls for stricter gun laws will fade. Polling from Civiqs has indicated support for tougher laws spikes following high-profile mass shootings before ebbing back to near pre-massacre levels. And that makes it all the easier for political leaders to move on.

“In the political world, in the media world, in the world we live in, those issues fade, I hate to say it, after three or four weeks,” said Republican Rep. Peter King, one of the few members of his party supporting universal background checks for gun purchases.

But one can’t help but imagine the rulebook might need a tweak after two mass shootings that not only left over 30 dead and many more wounded, but highlighted a rising problem of domestic terrorism in the country, which Democrats argue is augmented by some of the President’s own sentiments.

McConnell, who is a savvy strategist, recognizes the political danger in standing in the way of something tangible after a shooting many blame on Trump’s rhetoric. Democrats, in control of the House of Representatives, have put the onus on McConnell, pointing to the two pieces of gun control legislation they passed in February which have lain dormant in the Senate. “Leader Mitch McConnell, describing himself as the ‘grim reaper,’ has been an obstacle to taking any action,” Pelosi wrote in a letter to Trump last week, asking he call the Senate back from its recess.

McConnell, who opposes a return from recess, cracked the door open to legislation on Thursday, telling a local radio station in Kentucky that background checks will be atop his list when lawmakers return to Washington in September. “I want to make law,” he said. “Not see this political sparring go on endlessly.”

But, contrary to Trump telling reporters on Friday that McConnell is “totally onboard” for “intelligent background checks,” McConnell aides quietly are saying the Leader didn’t commit to supporting or promoting restrictions contained in the House version of the legislation. After all, most of the seats the Republican Party will be defending in the 2020 Senate elections are in the South and the West, where regional affinities for guns run deep.

McConnell’s rhetoric comes amid a gradual shift in public opinion, which is notoriously tricky to measure when it comes to guns. By broad strokes, vast majorities of Americans support background checks before buying a weapon. At the same time, the once-looming National Rifle Association political clout has taken a ding in recent years, and Democrats have smartly turned it into a bogeyman they can mock. Proof of the shrinking potency of the NRA? In last year’s midterm elections, polling shows only 8% of voters ranked guns as their top issue — and of at 8%, 4-in-5 voted for Democrats. The real power is wielded in the GOP primaries, where the NRA has the potential to mount a challenger who will not bend to compromise on gun rights.

Gun safety advocates and lawmakers who have been pushing these changes for years are hopeful that the current environment can force a legislative compromise that the President would sign. But they also know that the time isn’t on their side — especially in 2019, when a news cycle is even shorter. It’s quite possible — probable even — that by the time lawmakers returns to Washington on Sept. 9, their attention will have shifted elsewhere. If past polling is predictive, the calls for action grow weaker with each passing week.

The one exception to this rule, many think, is if the President steps into the fray. “What can make the impact lasting,” said King, “is the President coming out for universal background checks.”

But Trump has remained fickle on this issue at best. Although he tweeted last week that background checks should be married with immigration reform — legislation that is essentially a non-starter — he did not mention the former in his subsequent address to the nation. On Friday, he voiced support for a reform bill that includes background checks, but also noted that the NRA, which opposes the policy, would have a say in the matter.

The NRA, which has typically one of the most powerful lobbies in Washington, is suffering from its own internal financial battles. But the organization is still a key player, and has the President’s ear. The Washington Post reported that NRA CEO Wayne LaPierre had called Trump after he had expressed support for background checks to tell him that position would not square well with his supporters. LaPierre released a rare statement August 8 declining to comment on the conversation but noting that the organization opposes “any legislation that unfairly infringes upon the rights of law-abiding citizens.”

“The inconvenient truth is this: the proposals being discussed by many would not have prevented the horrific tragedies in El Paso and Dayton,” said LaPierre. “Worse, they would make millions of law abiding Americans less safe and less able to defend themselves and their loved ones.”

The President, however, can be just as swayed by public opinion as he is by his phone conversations. And if polling stays where it is now — with roughly 9-in-10 people supporting background checks — it is entirely possible he could keep the national conversation centered on gun control.

“If the President shows leadership on this and says it’s something he wants to happen, I think the Senate will pass it,” said Rep. Will Hurd, a retiring Republican lawmaker who supported the background checks bill. “I actually think it’s that clear cut.”

To that end, gun responsibility groups are mobilizing to ensure the debate stays front and center. Everytown for Gun Safety is organizing with rallies in every state next weekend to push for the passage of the background check bill and red flag laws, which would allow police to take weapons away from individuals deemed dangerous. The group has also targeted a list of Senators they think could back the legislation and is planning on making themselves a visible presence at town halls during recess.

“Even if there’s fatigue because there’s so much going on in the world, the American public is just sick and tired and fed up and are showing up to all of these events because its not dropping off their radar,” said Christian Heyne, the vice president of policy at Brady, which advocates for gun safety legislation.

There was already evidence the 2020 field sees the utility of this topic. Tapping into headlines, Everytown and its affiliates cajoled the contenders to shift schedules to attend a day-long forum on gun violence in Des Moines, Iowa. There, one by one, the field took turns promising action and laying responsibility at the President’s feet.

“Shame on us — God help us — if 20 years from now there’s a candidate forum with presidential candidates in the aftermath of mass shootings, and a day-to-day beat of daily shootings, saying, ‘Okay, what are we going to do to make sure it’s different this time?’” South Bend, Ind., Mayor Pete Buttigieg said. “Let’s not let that happen.”

If the sentiment sounds familiar, there’s a reason. It’s what politicians say after every one of these. And, every time, the intensity fades and political leaders move to less thorny priorities that seem less impossible. That may have been what McConnell was proposing: the possible, which may not be gun restrictions. 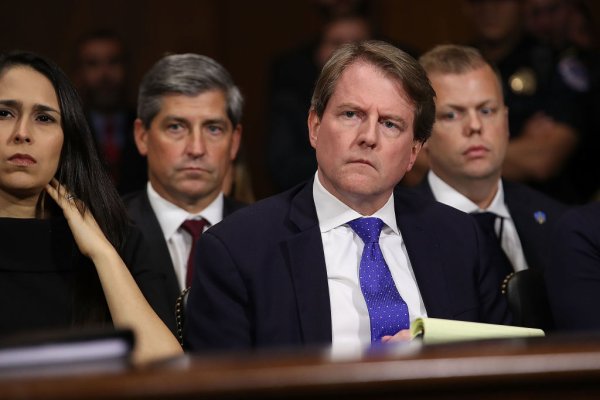 House Democrats Take Don McGahn to Court Over Ignoring Their Subpoena to Testify
Next Up: Editor's Pick