Here's Why the Environmental Protection Agency Was Created

The Olin Mathieson Alkali Works plant (seen in 1968) in the Appalachian town of Saltville, Va,, for decades dumped its calcium chloride effluent into the North Fork of the Holston River which flowed past the plant. In 1970 the company announced it could not meet the new Environmental Protection Agency (EPA) water pollution standards and would close the plant.
Robert Alexander—Getty Images
By Lily Rothman

The Cuyahoga River burst into flames, while the Potomac stunk from the hundreds of millions of gallons of waste added to its waters every single day.

As the Environmental Protection Agency becomes the subject of focus for major cuts under President Trump’s proposed budget — and as the U.N. marks World Water Day on Wednesday — it’s worth looking back at the moment in time when the EPA was first created, and why Richard Nixon saw a need for the agency to exist.

Dirty water was only one ingredient. At the close of the 1960s, the United States could not escape the fact of, as TIME put it in 1968, “the relentless degradations of a once virgin continent.” The evidence was right in front of citizens’ faces. Pollution had gotten bad enough to be undeniable, and science had become advanced enough to make the reasons why clear. In 1963, smog had killed 400 New Yorkers, and Lake Erie’s oxygen content had become so depleted that the center of the lake sustained precious little life. An oil spill off the California coast in 1969 coated 400 square miles with slime and killed hundreds of birds. Scientists announced that auto exhaust was at high enough levels in some places that it could cause birth defects. The city of St. Louis smelled, as one resident put it, “like an old-fashioned drugstore on fire.”

The science of ecology — which still had to be defined for TIME’s readers — was expanding and attracting new thinkers, who showed that the U.S. bore more than its fair share of the environmental degradation that had swept the world in the previous decades. (The country had 5.7% of global population in 1970, by TIME’s count back then, but consumed 40% of the natural resources.) The reasons for such heavy consumption went beyond mere economic ability to consume, some theorized. The U.S. had been built, after all, on the idea that it was a vast land there for the taking. Those national myths began to fall apart on a broad scale in the 1960s and ’70s, as the American Indian Movement and the environmental movement, respectively, reminded people that in fact that land was already being used and its resources were finite.

Despite backlash from all directions, the message was getting through to at least one person: Nixon, who was elected President in 1968.

These events and others that had come to a head in the years leading up to the election resulted in a sense of urgency that propelled the new president to quickly establish an advisory group to focus on pollution problems and the Congress to look for ways to coordinate the government’s response to environmental problems, as courts began to crack down on those responsible for pollution.

In the summer of 1969, Nixon established the Environmental Quality Council, which TIME described as “a Cabinet-level advisory group designed to coordinate governmental action against environmental decay at all levels, create new proposals to control pollution, and foresee problems.” Shortly after, Congress passed the Environmental Policy Act of 1969, one element of which was to create a Council on Environmental Policy, “empowered to review all federal activities that affect the quality of life and make reports directly to the President,” per the magazine.

As 1970 dawned, with American concerns about the War in Vietnam no longer dominating headlines, concerns about the environment became a further priority for the president. “It is literally now or never,” Nixon said at the time. “A major goal for the next ten years for this country must be to restore the cleanliness of the air, the water, the broader problem of population congestion, transport and the like.”

In his State of the Union address delivered that January, he underscored the point:

The cost of such clean-up action was estimated at $100 billion in the first half of the decade (though the cost to business of preventing future pollution would be much lower). One idea proposed to meet such costs, TIME reported (in an article that put the word “recycle” in quotes), was to charge companies by the pound for pollutants they contributed to the water system.

Nixon followed his State of the Union with a special message to Congress in which he put forth more than a dozen orders and 23 requests to address problems like automobile emission standards. (Critics noted, however, that some major problems, like enforcement, were largely ignored.) One problem, however, was that as awareness of various aspects of pollution had come to attention, different agencies and offices had popped up to address them. That separation was a mismatch with a scale of the problem and the reality of the environment’s interconnectedness.

And so, in the summer of 1970, Nixon issued the dryly titled Reorganization Plan 3, which provided for the creation of the Environmental Protection Agency, reflecting the new understanding of ecology and the environment’s status as a system. In doing so, he told Congress that it was clear that the piecemeal development of environmental agencies would no longer serve such a large project.

“Our national government today is not structured to make a coordinated attack on the pollutants which debase the air we breathe, the water we drink, and the land that grows our food. Indeed, the present governmental structure for dealing with environmental pollution often defies effective and concerted action,” he said. “Despite its complexity, for pollution control purposes the environment must be perceived as a single, interrelated system. Present assignments of departmental responsibilities do not reflect this interrelatedness.”

As the year drew to a close — and TIME named the environment the Issue of the Year for 1970 — future Presidential Medal of Freedom awardee William Ruckelshaus became the first director of the agency. 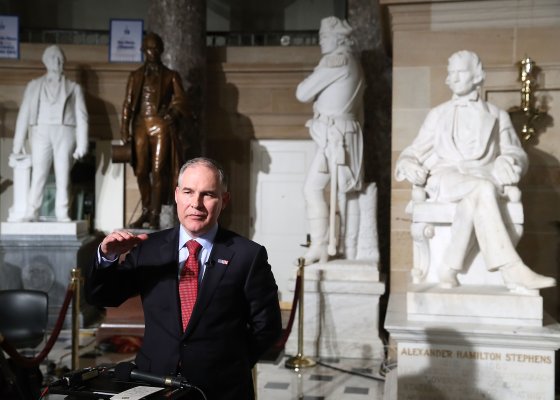 EPA Head Scott Pruitt Has Already Broken 5 of His Promises to Congress
Next Up: Editor's Pick