More and more studies are showing how regular exercise benefits the brain, and in particular, the aging brain. What’s less clear is how exactly exercise counters the cognitive decline that comes with aging and diseases like Alzheimer’s.

To find out, for nearly a decade, Ozioma Okonkwo, assistant professor of medicine at the University of Wisconsin School of Medicine and Public Health and his colleagues have studied a unique group of middle-aged people at higher risk of developing Alzheimer’s. Through a series of studies, the team has been building knowledge about which biological processes seem to change with exercise. Okonkwo’s latest findings show that improvements in aerobic fitness mitigated one of the physiological brain changes associated with Alzheimer’s: the slowing down of how neurons breakdown glucose. The research, which has not been published yet, was presented at the annual meeting of the American Psychological Association on Aug. 9.

Okonkwo works with the 1,500 people on the Wisconsin Registry for Alzheimer’s Prevention (WRAP)—all of whom are cognitively normal, but have genes that put them at higher risk of developing Alzheimer’s, or have one or two parents who have been diagnosed with the disease, or both. In the latest study, Okonkwo recruited 23 people from the WRAP population who were not physically active. Eleven were asked to participate in an exercise regimen to improve their aerobic fitness for six months, and 12 served as the control. All had their brains scanned to track Alzheimer’s-related brain changes including differences in how neurons metabolized glucose, since in people with Alzheimer’s glucose breakdown slows. At the end of the study period, the group that exercised more showed higher levels of glucose metabolism and performed better on cognitive-function tests compared to the controls.

“We are carrying our research full circle and beginning to demonstrate some causality,” says Okonkwo about the significance of his findings.

In their previous work, he and his team identified a series of Alzheimer’s-related biological changes that seemed to be affected by exercise by comparing, retrospectively, people who were more physically active to those who were not. In this study, they showed that intervening with an exercise regimen could actually affect these processes. Taken together, his body of research is establishing exactly how physical activity contributes to significant changes in the biological processes that drive Alzheimer’s, and may even reduce the effect of strong risk factors such as age and genes linked to higher risk of neurodegenerative disease.

For example, in their earlier work his group confirmed that as people age, the presence of Alzheimer’s-related brain changes increases—including the buildup of amyloid, slower breakdown of glucose by brain cells, shrinking of the volume of the hippocampus (central to memory), and declines in cognitive function measured in standard recall and recognition tests.

But they found that in people who reported exercising at moderate intensity at least 150 minutes a week, as public health experts recommend, brain scans showed that these changes were significantly reduced and in some cases non-existent compared to people who were not active. “The association between age and Alzheimer’s brain changes was blunted,” says Okonkwo, “Even if [Alzheimer’s] got worse, it didn’t get worse at the same speed or rate among those who are physically active as in those who are inactive.”

In another previous study, they found the benefits of exercise in controlling Alzheimer’s processes even among those with genetic predisposition for the disease. When they divided the participants by fitness levels, based on a treadmill test and their ability to efficiently take in oxygen, they found that being fit nearly negated the effect of the deleterious gene ApoE4. “It’s a remarkable finding because it’s not something that was predicted,” says Okonkwo.

Given the encouraging results from his latest study of 23 people that showed intervening with exercise can change some of the Alzheimer’s-related brain changes of the disease, he plans to expand his small study to confirm the positive effect that exercise and better fitness can have in slowing the signs of Alzheimer’s. Already, his work has inspired a study launched earlier this year and funded by the National Institutes of Health that includes brain scans to track how physical activity affects biological factors like amyloid and glucose in people at higher risk of developing Alzheimer’s. The cumulative results show that “there may be certain things we are born with, and certain things that we can’t change ]when it comes to Alzheimer’s risk], but a behavior like physical exercise might help us to modify that,” says Heather Snyder, vice president of medical and scientific relations at the Alzheimer’s Association. 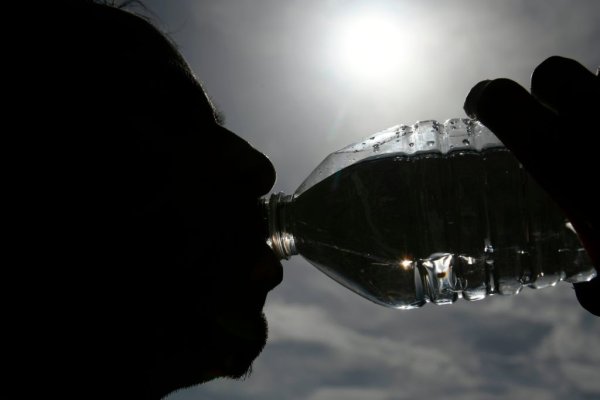 Why Drinking Water All Day Long Is Not the Best Way to Stay Hydrated
Next Up: Editor's Pick