Miners stand on train tracks in Cumberland, Kentucky, U.S., on Friday, Aug. 2, 2019. The miners have been working in shifts to block railroad tracks leading to a Blackjewel mine outside since Monday afternoon, Harlan County Judge-Executive Dan Mosley said in an interview. They're demanding back pay for work done in weeks leading up to the bankruptcy, after checks issued by Blackjewel bounced or never arrived. Photographer: via Getty Images
Meg Roussos—Bloomberg/Getty Images
By Josiah Bates

Coal miners in Kentucky continue to protest their former employer by blocking a railroad track that carries coal trains, demanding back pay after being laid off last month.

The protest, which started on July 29 in Cumberland, Kentucky, is in response to workers who were laid off by their former employer, Blackjewel LLC, which filed for Chapter 11 bankruptcy on July 1. As well as “operational issues” in its mines, the company cited “a combination of declining commodity prices, reduced domestic demand for thermal and metallurgical coal, and increased oversight and costs associated with regulatory compliance” as factors leading to it going bankrupt in court filings.

“The entire U.S. mining complex has been impacted by these events. A growing number of peers have filed for bankruptcy over the course of the past 5+ years. The entire industry either has gone through, or is currently going through, a period of financial distress and reorganization,” the document continued.

The protest started with around 20 miners, posted on the track for nearly 50 hours straight — often by themselves, Jeff Willig, one of the workers who started the protest, tells TIME. Now it’s grown with the miners working in shifts of around 8-12 hours to ensure continuous coverage on the track. Members of the local community have shown their support, setting up an outdoor kitchen, providing first aid kits and bringing water and ice for the protesters. State Rep. Adam Bowling, whose district includes parts of Harlan County, has also joined the protests, the Associated Press reports.

“We are not stopping until we get paid,” Willig says. “There is just tremendous support for all of us. We’ve had other blue collar workers tell us that they ‘need to do what the coal workers are doing.'”

Cumberland mayor Charles Raleigh says the town is united in support the miners and their protest.

“I fully stand behind them. There’s been nothing but support for what they’re doing,” Mayor Raleigh tells TIME. “We are hoping this brings much needed change to the issues that lead to this happening.”

Supporters of miners stand on train tracks in Cumberland, Kentucky, U.S., on Friday, Aug. 2, 2019. The miners have been working in shifts to block railroad tracks leading to a Blackjewel mine outside since Monday afternoon, Harlan County Judge-Executive Dan Mosley said in an interview.
Meg Roussos/Bloomberg via Getty Images

“I fully understand the number of coal companies that continue to struggle in the aftermath of the War on Coal, but undercutting employees who invested their time and talents to mine one of our greatest natural resources, is a shameful way to conduct business,” said Rep. Hal Rogers, whose congressional district covers Harlan County in a statement. “Our coal miners deserve better and I will continue fighting for them.”

Blackjewel, which was founded in 2017, was one of the largest coal mining companies in the country. Its bankruptcy filing also affected employees in Wyoming, Virginia and West Virginia; in total about 1700 miners have been affected. According to the AP, Blackjewel is selling its assets to cover nearly $400 million in debts.

The protest has kept a Blackjewel train from carrying $1 million worth of coal from one of their former mines in Harlan County. Via the AP, the rail company responsible for transporting the shipment has said it “is monitoring the situation and hopes it is resolved quickly.”

The last paycheck the miners received was on June 28. But, according to Joe Childers, an attorney for the miners, the checks bounced. “There was about three weeks and one day they worked that they never got paid for,” Childers tells TIME.

The coal miners have filed a class action lawsuit for back pay in federal bankruptcy court. The suit also alleges the misappropriation of funds intended for the miners’ 401k accounts. Many Kentucky miners also traveled to a bankruptcy court hearing in West Virginia last week to continue their protests. The lawsuit filed is still pending in federal court. “We are in the process of figuring out how we can collect more money for the miners through this lawsuit,” Childers says.

Blackjewel did not respond to multiple requests for comment from TIME, though the company’s owner, coal tycoon Jeffrey A. Hoops, confirmed the authenticity of a letter he shared with his workers after the bankruptcy filing to WYMT. “I accept responsibility for being unable to lead this company through these difficult times,” the letter read. “Know in my heart how hard I fought for each of you and this company, and to have people threaten me and say I took money out of this company for other projects hurts more than words can express as it has been just the opposite.”

Shortly after Blackjewel’s bankruptcy filing, Kentucky Gov. Matt Bevin has confirmed the state’s Labor Department has opened an investigation. “We will use every available tool within Kentucky’s statutory authority to help our hardworking miners and their families receive financial restitution,” Bevin said in a statement released to the media. “I am confident that the Labor Cabinet will undertake a thorough investigation and determine the appropriate best path forward.”

In the same statement, the Labor Cabinet’s secretary added that, “if necessary,” it would lead a prosecution based on the miners’ claims.

A miner sits on train tracks in Cumberland, Kentucky, U.S., on Friday, Aug. 2, 2019. The miners have been working in shifts to block railroad tracks leading to a Blackjewel mine outside since Monday afternoon, Harlan County Judge-Executive Dan Mosley said in an interview.
Meg Roussos/Bloomberg via Getty Images

Following the bankruptcy filing, Blackjewel’s mines were put up for auctions — mines in Kentucky were purchased last week by Kopper Glo, a mining company based out of Tennessee. The company reportedly promised to pay $450,000 and $550,00 to miners in Harlan and Letcher counties, according to WYMT. Kopper Glo did not respond to requests for comment from TIME but, per WYMT, the company hopes to reopen the mines and rehire as many of the miners as it can.

“I’m told they really wanted our mines and we’re all hoping to hear something from them this week,” Willing says.

On August 5, the former coal mining tycoon Richard Gilliam donated $1 million to coal workers impacted by the layoffs. His foundation, the Richard and Leslie Gilliam Foundation, will provide immediate funds to affected workers in Kentucky and Virginia. 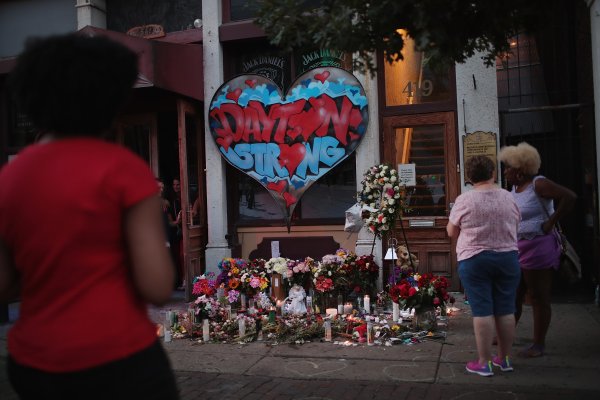 Friend of Dayton Shooter, Who Purchased Weapon Accessories For Him, Charged With Lying on Federal Firearms Form
Next Up: Editor's Pick