The U.S. raised its travel warning for Hong Kong on Wednesday, advising visitors to exercise increased caution if they plan to visit due to “civil unrest.”

The State Department raised its advisory to a level two on a four-point scale, reports Reuters.

“Most [of the protests] have been peaceful, but some have turned confrontational or resulted in violent clashes,” the advisory said.

Protests have gripped the Asian financial hub since June. While the movement began in opposition to a now-suspended extradition bill, it has since expanded to include broader aims, like calling for greater democracy and challenging Beijing’s control over the semiautonomous city. Marches, rallies and sit-ins have become a near-daily occurrence, and action has increasingly become aimed at disrupting city life.

A number of demonstrations have ended in violent clashes with police, who have used tear gas and rubber bullets to dispel crowds.

On Wednesday, one of the seniormost Chinese officials overseeing Hong Kong called the unrest this summer the worst crisis the territory has experienced since returning from British rule in 1997.

Australia and New Zealand also raised their travel warnings for Hong Kong this week. Canberra cited the unpredictable nature of protests, violent clashes with police and the involvement of “criminally-linked individuals,” while Wellington urged citizens to avoid all city protests since, “even those intended to be peaceful have the potential to turn violent with little or no warning.”

Protests have spilled over into residential areas and tourist hotspots. On Wednesday night, hundreds of protesters gathered and pointed lasers at Hong Kong’s space museum to oppose the arrest of a university student union leader for possessing laser pointers, which have at times been directed at police.

Earlier this week, airline workers participated in a citywide strike leading to the cancellation of hundreds of flights.

More protests are planned for the upcoming weekend, including a sit-in at the international airport Friday. 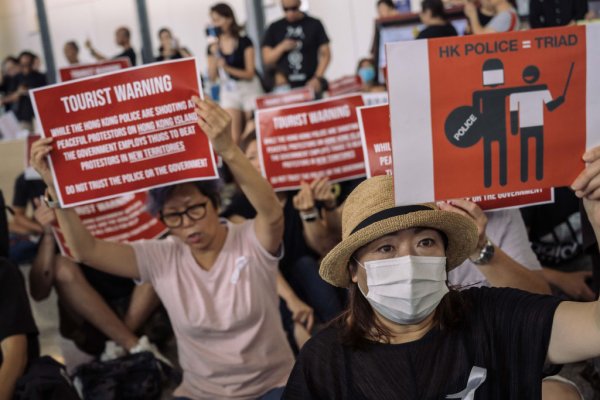 Australia Raises Travel Warning For Hong Kong Amid Protests
Next Up: Editor's Pick