The Department of Foreign Affairs and Trade amended its travel advice on the recommendation of consulate staff in Hong Kong who were concerned about the situation unfolding in the city, reports the Sydney Morning Herald.

“Protests have become more unpredictable and are expected to continue,” the department’s SmartTraveller website said.

Protests have gripped Hong Kong since early June, and have since become a near daily occurrence. What started as resistance against an extradition bill has snowballed into a wider anti-government movement. While several rallies and marches have progressed peacefully, a number of demonstrations across the city have devolved into violent clashes with police.

On Monday, a citywide strike snarled air, plane and road traffic while several of the more than half dozen rallies around the territory ended in battles between protesters and police. Police fired tear gas in a residential neighborhood to disperse protesters Tuesday, after the arrest of a student activist sparked more protests. On Wednesday, thousands of legal professionals staged a march across the city.

“Tourist areas have been affected. There is a risk of violent confrontation between protesters and police, or criminally-linked individuals, particularly at unauthorized protests,” the statement says.

It added that the risk of violence is greater at night and on weekends.

The demonstrations have at times centered around tourist hotspots. Workers at Disneyland participated in Monday’s strike, and in late July, thousands of protesters staged a sit-in at the arrivals hall of Hong Kong’s international airport to spread their message to tourists entering the city, and warn visitors about police and gang violence.

Protesters plan to head to the airport again this coming Friday. 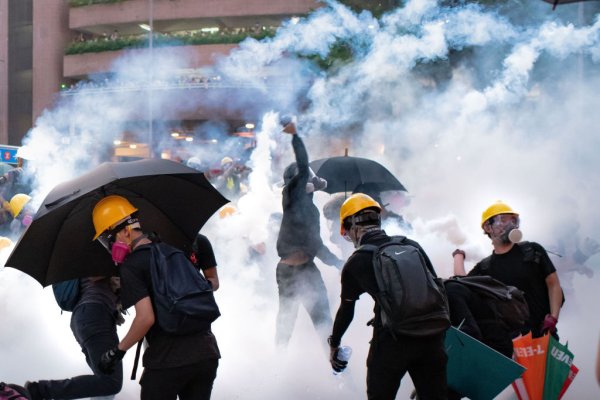 Beijing Issues Stern Warning to Hong Kong Over Protests
Next Up: Editor's Pick