Just a few hours after President Donald Trump visited with first-responders and people wounded in a shooting that claimed nine lives in Dayton, Ohio, he lashed out at the city’s mayor and Ohio Sen. Sherrod Brown, claiming they “misrepresented” what happened during the trip.

Confusingly, neither seem to have criticized the President’s hospital visit, with Brown saying he was “glad” that Trump comforted the patients during the visit on Wednesday.

As he flew on Air Force One to visit victims of another shooting in El Paso, Trump tweeted images of himself visiting with victims and medical staff in Dayton. He also fired off a pair of tweets attacking Dayton Mayor Nan Whaley and Brown, who are both Democrats.

“It was a warm & wonderful visit. Tremendous enthusiasm & even Love,” the president wrote. “Then I saw failed Presidential Candidate (0%) Sherrod Brown & Mayor Whaley totally misrepresenting what took place inside of the hospital. Their news conference after I left for El Paso was a fraud. It bore no resemblance to what took place with those incredible people that I was so lucky to meet and spend time with. They were all amazing!”

During their press conference this afternoon, neither Whaley or Brown seemed to criticize the president’s visit to the hospital, noting that he was well-received by the patients.

Trump’s statement that Brown was a “failed presidential candidate” is also inaccurate. While Brown’s team appeared to be mobilizing for a possible run earlier this year, the Senator never declared his candidacy.

In a video posted on Twitter of Whaley reading the tweet, Whaley appeared baffled by Trump’s comments.

“I’m really confused, we said he was treated, like, very well. I don’t know what they’re talking about ‘misrepresenting,” said Whaley. “Oh well. He lives in his world of Twitter.”

While traveling to El Paso, Trump also sent out a tweet mocking former Vice President and 2020 presidential candidate Joe Biden, who gave a speech Wednesday criticizing the President for having “fanned the flames of white supremacy” in the U.S. Biden said that Trump’s comments following the shooting consisted of “low-energy, vacant-eyed mouthing of the words written for him condemning white supremacists this week.”

In El Paso, President Trump spoke briefly with reporters and said that it was “an amazing day” and that the people he met had great “respect for the office of the presidency.”

“I wish you could have been in there seen it,” Trump told reporters, though it was widely reported that the press was not allowed to join him as he visited hospitals in Dayton and El Paso.

He also went on to say that people both in Dayton and El Paso expressed to him that they wanted action on gun control. Trump agreed, saying “Republicans want to do it and Democrats want to do it,” without giving specifics on what possible action could entail.

He tweeted again as he left Texas saying, “The Fake News worked overtime trying to disparage me and the two trips, but it just didn’t work. The love, respect and enthusiasm were there for all to see. They have been through so much. Sad!”

The visit comes amid calls for new gun safety measures, including from Ohio’s Republican governor, Mike DeWine, who introduced a major plan for new background checks and increased penalties for gun law violations in the state.

Since the shootings, Trump has said that he would support new background check legislation and “red flag laws,” which would enable authorities to seize firearms from people who are thought to be dangerous, but he dismissed calls for restrictions on assault rifles, saying there is “no political appetite for that at the moment.”

Trump has called for gun control in the past only to back down. After a mass shooting at a high school in Parkland, Fla., Trump said lawmakers should “think about” raising the age from 18 to 21 to buy certain types of guns. Though his Administration banned bump stocks, it did not work toward that goal.

During their press conference on Wednesday, both Brown and Whaley said that they had urged the President to take action on gun control. While the President had announced plans to give awards to first responders for rushing to help during the tragedy, Brown said he told him that his focus should be on legislation.

“Respectfully, the most important thing you can do for these police officers is to take these assault weapons off the streets,” Brown says he told the President.

Whaley, who earlier this week called the president’s comments on the tragedies in El Paso and Dayton were “unhelpful,” said that her time with the president had been brief, but that she had asked him to take action.

“It was like Mr. President, the people of Dayton and the city of Dayton are really looking forward to some action. This is what you can do to help us- to see some action on common sense gun legislation,” Whaley said.

Earlier on Wednesday, the President addressed criticism that he has not done enough to implement gun reform. Democrats have said that Trump has done little to prevent future tragedies. Other critics have suggested that Trump is actually exacerbating the tensions which lead to violence.

Rep. Veronica Escobar of El Paso has said that she turned down an invitation from the White House to accompany Trump during his visit to the city, writing on Facebook and Twitter on Tuesday that she plans to spend the day with El Pasoans.

“I declined the invitation to accompany the President because I refuse to be an accessory to his visit. I refuse to join without a true dialogue about the pain his racist and hateful words and actions have caused our community and this country,” Escboar wrote.

Before departing for Dayton, Trump also addressed Whaley’s claim that his team did not call her to notify her about his visit, saying that he had “one very nice conversation” with the mayor. The President said that he felt that his critics were trying to win “political points.”

On Wednesday, Trump brushed off the criticism. He noted that some of his critics are “very low in the polls” and argued that he would like to “stay out of the political fray.”

“These are people that are looking for political gain. I don’t think they’re getting it. And, as much as possible, I’ve tried to stay out of that,” Trump said.

Trump also emphasized that the gunman who murdered nine people in Dayton held liberal views. Local news has reported that the shooter allegedly belonged to the loose affiliation of radical activists known as Antifa, and that he carried a gun as a counter-protester during a Ku Klux Klan rally in the city this May.

“If you look at Dayton, that was a person that supported, I guess you would say, Bernie Sanders, I understood; Antifa, I understood; Elizabeth Warren, I understood. It had nothing to do with President Trump,” Trump said. 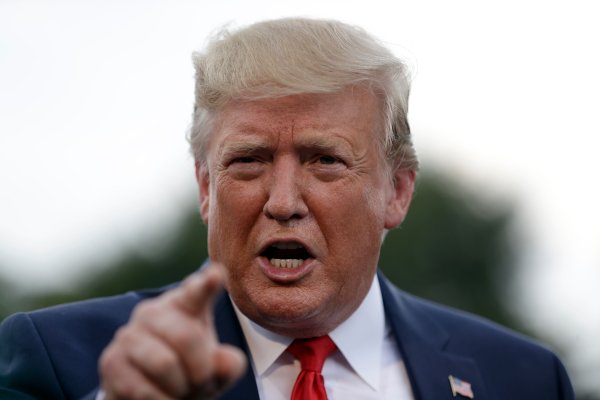 Trump's Own Words Undermine His Case After El Paso Shooting
Next Up: Editor's Pick