‘Anxiety Fills the Air.' What It's Like Inside Kashmir When All Communication With the Outside World Is Cut Off

Fahad Shah is a Kashmiri journalist and the founder and editor of The Kashmir Walla, a weekly newspaper. He filed the piece below during the ongoing communications blackout in the Kashmir Valley. He can be found on Twitter: @pzfahad

Delivered on a bright Monday morning, Imaad Tariq was one of the first babies born into Indian Prime Minister Narendra Modi’s Naya Kashmir or new Kashmir. But most of his family has no idea he has been born. “Nobody knows that my wife delivered a baby boy,” says Tariq Ahmad Sheikh, 40, walking in the hospital courtyard the day after his son was born. “We couldn’t inform family nor is anyone able to reach here.”

Since Sunday, Delhi has entirely shut down the Internet, landline and mobile networks in the India-controlled part of the Himalayan region of Kashmir — leaving some 7 million people stranded without any way to contact family and friends. In an unprecedented bid to clamp down on its part of the disputed territory, the Indian government has closed schools, banned public meetings, and barricaded roads and neighborhoods in Srinagar, the region’s largest city that lies in the Kashmir Valley.

With the help of over 38,000 additional troops dispatched to Kashmir over the past week, authorities have arrested more than 100 people, including political leaders and activists considered a threat to peace in the Valley. Meanwhile, police confirmed Wednesday that a young protester died after jumping into a river while being chased by police during a curfew in Srinagar.

But few Kashmiris will know about that. Many of them will not even know that on Monday morning, Indian Home Minister Amit Shah announced to Parliament that the Indian government would strip their state of the special status that it held under the Indian Constitution for the last 70 years.

Revoking Article 370, which gave near-autonomy to the Muslim-majority state of Jammu and Kashmir, had long been a campaign pledge of Modi’s Hindu nationalist Bharatiya Janata Party (BJP), which won a second term in a landslide victory in May. Shah also introduced a plan to break up the current state into two separate Union Territories, giving the Delhi government far more control over both. (A part of the Kashmir region remains with Pakistan, which claims the whole, and which has fought three wars with India over it since 1947.)

“My son was born a few minutes after I heard Article 370 was revoked,” says Sheikh, 40, who drives an auto-rickshaw in Srinagar. He and his wife came to the hospital earlier, hearing rumors of an impending curfew. Like many Kashmiris, they were surprised to see the administration preparing for a war-like situation, with various emergency orders, including calling all tourists and non-natives to “leave as soon as possible.”

Security personnel stand guard at a roadblock in Jammu on August 7. A protester died after being chased by police during a curfew in Kashmir's main city, left in turmoil by an Indian government move to tighten control over the restive region, a police official said on August 7.
RAKESH BAKSHI—AFP/Getty Images

Just hours before the rollback of Kashmir’s autonomy was announced to the world, we Kashmiris woke up to find our Internet cut off for the 53rd time this year, as well as the suspension of all cellular services and landline telephones. People remain cut off from their families, and journalists have no channels of communication to report through. The online homepage of Kashmir’s largest local paper is blank and the website of our own magazine has been offline since Monday. Many journalists like me have had to send out work on thumb drives with passengers flying out of the area by airplane. Only a small group of people using satellite dish networks have access to TV news channels. Speaker mounted vehicles are making announcements warning people not to venture out. There is no way to know or confirm if the situation has remained peaceful. Amid no communication, anxiety fills the air in the Valley.

The only way to get an idea of the situation is to visit hospitals. During the day, the Shri Maharaja Hari Singh (SMHS) hospital in Srinagar was inaccessible to journalists, but at midnight on Tuesday I went to visit. As I stepped into the Ophthalmology ward, I saw five young men who had been hit by pellets, as hospital attendants fanned their bandaged faces. Government officials have denied using pellet guns this week, but pellet guns are common in Kashmir. (The state government said between July 2016 and February 2017, at least 6,221 people were injured by pellet guns, including 782 eye injuries; Amnesty International puts the figures even higher.)

“I am his neighbor and picked him up from outside his home when he was injured,” said a man, without giving his name, in his 30s, with one 17-year-old patient. “He was hit by pellets in both eyes and the doctors are observing his condition before operating. He says that he can’t see from his left eye also.” Attendants in the hospital said more than a dozen young people came in that day with injuries, including some with tear gas inhalation.

Healthcare availability for civilians is disrupted, with limited access to ambulances or any ability to call one. On the roads, there are barricades after every few hundred meters. An hour after leaving the hospital, I saw a teenage girl sitting next to her mother in a load carrier vehicle, with a drip needle pierced into her hand. “My daughter complained of pain in her appendix,” said her mother, who said she could not get an ambulance in the town of Pampore, 10 miles from Srinagar. “We left in the load carrier and were stopped at more than seven barricades.”

Kashmiris have long been in a precarious situation, with the economy here already suffering from the ongoing crisis. Jammu and Kashmir has one of the country’s highest unemployment rates. But now, many are worried about the situation spiraling into a bigger conflict.

The repeal of Article 370 and Article 35A marks an unprecedented end to constitutional rights guaranteed for decades. Together, the Articles were the umbilical cord between Kashmir and India — giving Kashmir its own flag, laws and state parliament, and also prohibiting non-residents from owning any property in the region.

Now the Indian part of Kashmir has been divided, disempowered, and degraded. Such a unilateral move from Delhi also undermines pro-Indian political parties in the region, which had been strengthening Indian control over Kashmir for decades. Kashmiri historian Siddiq Wahid, who studied at Harvard and is now the Vice-Chancellor at the Islamic University of Science & Technology, says India has clearly ignored its own laws and overlooked what Kashmiris want.

Speaking at his home on the outskirts of Srinagar, Wahid tells me that the move will ultimately lead to a deep centralization of power in Delhi and a removal of sovereignty from the people themselves. This “concentration of power in the hands of a few will have implications as a precedent for all of India’s states, in a so-called democratic republic,” Wahid says. “There will be a surge in militancy and state violence. They are forbidding protests, but the ultimate aim is to change demography.”

When Arhan Nazir heard about the repeal of Article 370 at his home in downtown Srinagar, he says he went into “shock.” “It is a physical pain,” says the 25-year-old, who works as a Technical Advisor at Jamkash Automobiles in Srinagar. “They should have consulted mainstream politicians first.”

He says his 18-month-old daughter Zaira Nazir contracted an eye infection on Monday night because of tear gas shell smoke, fired to quell protests. “We took her to the SMHS hospital at night, where she was treated. A few other children had to face the same fate,” he adds, sounding defeated.

Nazir’s view is that India should have consulted the local mainstream or pro-India politicians. But instead two former chief ministers of Kashmir — Omar Abdullah and Mehbooba Mufti, who was also previously in government with the BJP — were arrested along with a few other politicians to curb their dissent. Mufti and Abdullah come from two families who have been the representatives of the Indian government, urging people to vote during elections and promising the safety of the special status.

Since Monday, hordes of people have been leaving Kashmir. Many people working here were temporary residents, including thousands of skilled workers and labourers from several parts of India. Now, these workers are walking several miles to reach the Tourist Reception Center (TRC) in Srinagar. “It has been two days, we are waiting here, joining the queue but we don’t get a ticket,” says Lalan, 60, who comes from the state of Bihar and has been working as a laborer in Kashmir for the last 10 years.

“We are leaving because of the situation here. I wasn’t told to leave by anyone but there is a threat after this happened. Before this we had never felt scared but now it is not easy. People say there will be a huge crisis. We don’t have anything to work on now.”

With the dawn of another day and deployment of paramilitary forces to enforce the restrictions, many Kashmiris are finding their identities under threat. Others are fearing for their lives, worrying about an impending surge in violent clashes. For many of us, all we feel is a sheer helplessness, as if a limb has been torn off — an act that has not only reshaped Kashmir’s history and future, but also given Pakistan and China potential cause to ramp up future clashes between Kashmiris and Indian government.

What is the future for newborn Imaad Tariq? It’s the question his father is asking, as are hundreds of thousands of other Kashmiris. 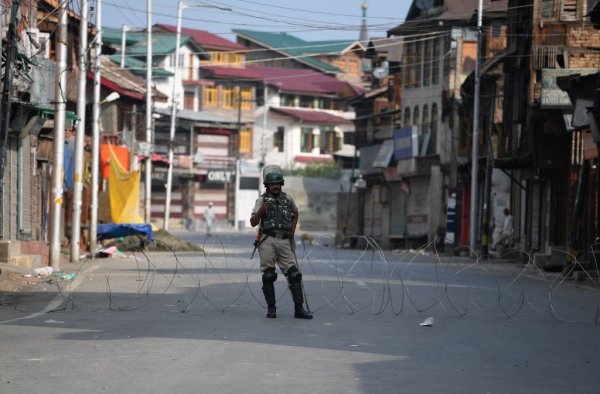 I Was in Kashmir When India Seized Control. This Is What I Saw
Next Up: Editor's Pick