Watch the 10 Most Memorable Performances at Woodstock

This month marks 50 years since the first Woodstock Music and Art Fair at Max Yasgur‘s farm in Bethel, New York — that game-changing, free-for-all of a weekend that came to symbolize hippie culture. The festival was marked by organizational struggles, from issues with weather and accommodation to traffic that led to serious set delays. (Most of the evening acts ended up performing well into the morning of the following days.) Many of the nearly half a million attendees didn’t even end up seeing or hearing any of the performers.

But Woodstock remains indelible in our musical and cultural history. Many of the acts who took the stage were immortalized as icons of the era, either reified for their sets or kicking off their ascent to stardom. Here are 10 of the most memorable performances, from Jimi Hendrix to Santana to Janis Joplin, that have lived on over the last half a century.

Jimi Hendrix was Woodstock’s headliner. But because of delays, he didn’t end up playing until the morning of the final day of the festival, to a crowd that had dwindled down to somewhere around 25,000. No matter: The legendary guitarist made his time onstage count, closing out Woodstock with one of his most iconic live performances of all time. (And certainly the most creative take on “The Star-Spangled Banner,” a distinction which still stands.) Over four minutes, an intently focused, solemn-faced Hendrix drew out the national anthem with ferocious creativity. His screaming guitar echoes his generation’s fears in the face of the Vietnam War: His lingering notes sound like the howl of planes, bombs and warfare. There’s the melody we know, and then there’s Hendrix’s powerful rendering of chaos and destruction, no lyrics needed.

“I Want to Take You Higher,” Sly and the Family Stone

The psychedelic funk-rock groove of Sly and the Family Stone was a high point in the Woodstock lineup. Performing in the early morning hours of Aug. 17 for nearly an hour, they played a rendition of “I Want to Take You Higher” — with its juicy bass riff, horn sections and Sly’s energetic growl — as a dance-ready jam that got the crowd going. They had put out their now-classic fourth album Stand! just a few months prior (it includes seminal jams like “Everyday People” and “Sex Machine”), and their Woodstock set proved their undeniable star power.

“With a Little Help From My Friends,” Joe Cocker

The Beatles didn’t go to Woodstock. But British crooner Joe Cocker was there to perform a cover of their song “With a Little Help From My Friends” that’s considered a top moment of the whole weekend. Cocker’s gruff, distinctive growl turns the sweet tune into something altogether new, and very much his own. Cocker was known for putting his whole body into his performances, tossing his head and his arms around with abandon as he gets into the music; that’s certainly on full display for this song. Add all that to the image of his faded bell-bottom jeans, tie-dye shirt and shaggy hair, and both the song and performance seem to fully encapsulate the Woodstock spirit.

“Freedom” wasn’t on the set list of the then relatively unknown folk-blues singer and guitarist Richie Havens. In fact, it was a song that didn’t even exist when he began playing it on Aug. 15. As the festival’s very first performer (a role he was coerced into after other artists were delayed by an epic traffic jam), he was tasked with holding the audience’s attention for nearly three hours and told to stall as organizers awaited the arrival of the scheduled acts. So he dug deep and found “Freedom” somewhere inside him, out of necessity, after playing everything else he knew. The song was based on an old spiritual and inspired by the crowd itself. His impassioned ingenuity — and the rest of his performance — put him on the map, and he became a beloved artist soon after. But the raw energy of that acoustic first version of “Freedom” remains legendary.

The percussion-forward, 45-minute Santana set at Woodstock is legendary for a reason. With Carlos Santana on guitar, Gregg Rolie on keyboard, David Brown on bass, Michael Shrieve on drums and Michael Carabello and Jose Areas on percussion, it’s a masterclass of a band in sync. Perhaps the best part is that each player gets time to shine — and looks as though they’re feeling the music deep in their bones. In the midst of it all, Santana’s wailing guitar became a focal point that solidified his reputation as a genius. It was a breakthrough moment for the young band, hinting at a long career to come.

“My Generation,” The Who

The Who had been hanging around for more than 12 hours before they took the Woodstock stage, and — against the peace-and-love spirit of the event— famously demanded payment up front. But they came through in the end, finishing up their set, which coincided with sunrise, with their early hit “My Generation.” “It’s kind of our hymn. It’s a song about you and me. We’re getting a bit old now,” singer Pete Townshend introduced the song. This rendition is full of quirky vocal adjustments and lyric deliveries that distinguish it from the recorded version. Earlier in their set, The Who had been briefly interrupted by an activist who grabbed Townshend’s mic, leading to an onstage kerfuffle.

Crosby, Stills, Nash & Young were performing together live for just the second time in the band’s existence when they came to Woodstock, ending up playing around 4 a.m. on the festival’s final day. (Young only performed for two songs of their set, and sat out this particular one.) “Suite: Judy Blue Eyes” is a sweet acoustic tune written by Stills that shows off the young band’s dexterity with harmony and memorable melodies.

“Somebody to Love,” Jefferson Airplane

Singer Grace Slick introduced the Jefferson Airplane set as “morning maniac music,” which was apt given their performance time well into the morning of the festival’s second day. “It’s a new dawn,” she went on. Jefferson Airplane was well established in California as a favorite on the hippie scene. Slick’s impromptu vocal riffs gave their set a distinctive energy. “Somebody to Love” and “White Rabbit,” two songs that Slick brought with her from previous bands, became Jefferson Airplane’s big hits, and the band would go on to be inducted into the Rock ‘n’ Roll Hall of Fame.

The last performer on the festival’s first night — which meant she went on well into the pre-dawn hours — Joan Baez was a folk voice in a field heavily skewed toward rock ‘n’ roll. She was considered the most overtly political of the artists to perform, with her husband imprisoned at the time for draft resistance. (And, at the ripe old age of 28, she was one of the older artists on the bill — as well as one of the only women, not to mention that she was six months pregnant). Baez went out, alone with her guitar, and sang a tender and lilting a cappella version of the spiritual “Swing Low, Sweet Chariot.” The trill in her voice echoes out over the crowd as she hits her high notes.

Janis Joplin was advertised as a Woodstock headliner. She finally went on well into early Sunday morning after killing time partying backstage. “Ball and Chain” was her encore song, on which Joplin let loose with her melodic screech. By the time she reached Woodstock, Joplin was a solo artist; she had previously performed at the Monterey Pop Festival in 1967 as part of the psychedelic rock band Big Brother and the Holding Company, and was beloved as a star already. Even The Who’s Pete Townshend appreciated her performance. “She wasn’t at her best,” he’s been quoted as saying, “due to the amount of booze and heroin she’d consumed. But even Janis on an off-night was incredible.” 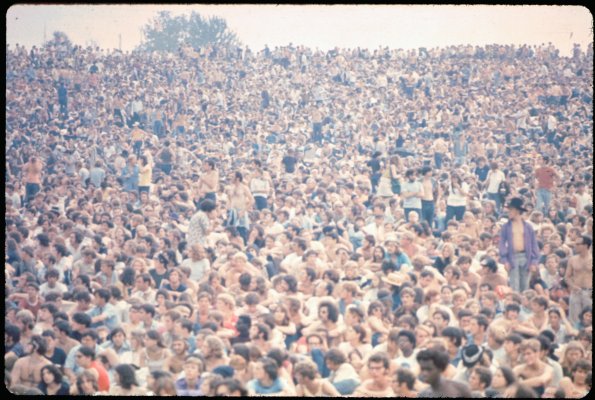 People Were Born and Died at Woodstock. Here Are Their Stories
Next Up: Editor's Pick