A New Woodstock Doc Offers a Hippie Nostalgia Trip. But It's Time to Think More Critically About the Festival

What was it like to be at Woodstock? It’s a question that attendees have been fielding since Graham Nash regaled then-girlfriend Joni Mitchell (who’d been stuck in New York City that weekend preparing for an appearance on The Dick Cavett Show) with recollections of the incandescent experience. His tales famously inspired her song “Woodstock,” which idealized the festival as a sacred pilgrimage “back to the garden”—an Eden beyond the reach of soul-destroying square society.

For many of us who weren’t among the half-million-ish hippies who converged on Max Yasgur’s farm in August of 1969, Mitchell’s poetic hearsay has shaped our utopian impressions of the event. The song’s influence has been second only to that of Michael Wadleigh’s Oscar-winning 1970 concert film Woodstock, which fixes its gaze mostly on a stage that few attendees could see. But there was always more to Woodstock than those documents let on. As we spend the summer celebrating the festival on its 50th anniversary—and continue to unpack the legacy of the baby boomers—it seems like the right time to reconsider it from a more detached perspective.

Yet you won’t find much reflection of that nature in the solidly constructed new PBS American Experience documentary Woodstock: Three Days That Defined a Generation, airing Aug. 6. Director Barak Goodman, a long-time contributor to the series who has tackled such thorny subjects as the Oklahoma City bombing and the My Lai massacre, pairs archival footage with new interviews in yet another attempt to simulate the experience of attending Woodstock. He sets out to differentiate his film from Wadleigh’s by focusing on the crowd more than the rock stars and organizers who largely escaped the muddier, more chaotic aspects of the weekend.

At 96 minutes, the engaging but ultimately unsatisfying result plays more like an abridged version of its nearly four-hour predecessor. (Wadleigh and editors including a young Martin Scorsese and Thelma Schoonmaker chose their movie’s few extended audience interviews carefully. A chat with two sometime lovers serves as a compact portrait of a generation that was both idealistic and disaffected.) There are a few truly fascinating passages: Activist clown Wavy Gravy recalls how the organizers recruited his Hog Farm commune to keep the peace. Along with their expertise in soothing psychonauts on bad trips, their knowledge of how to feed and calm large groups proved essential in preventing catastrophe. A tender profile of Yasgur sheds light on why a Republican dairy farmer welcomed the mass of kids who trampled his pastures.

The crowd at Woodstock
Courtesy of Barry Z Levine, www.WoodstockWitness.com

Goodman opens with an origin story for the festival, which was conceived as a promotional event for a recording studio in the town of Woodstock, NY that never got built and was booted from a venue in Wallkill, NY just a month before the concert was set to take place. Its producers fill in their own backstories, many of which involve privileged upbringings and postgraduate education. Cultural context comes in the form of obligatory montages about MLK, RFK, the draft and the cataclysmic 1968 Democratic convention, as well as the roles music and drugs played in youth protest movements.

Woodstock is framed as an antidote to the strife of ’68. “By 1969,” one attendee recalls, “it finally felt like we were winning some counter-war against the Establishment.” Even in a film woven together from first-person accounts, it’s a strange assertion to leave unchallenged. Woodstock is usually thought of as the last gasp of the hippie dream, as hard drugs displaced gentler substances and violence at Altamont—less than four months after Woodstock—revealed a dark side to music festivals. By the end of 1970, headliners Janis Joplin and Jimi Hendrix were dead.

The approach Goodman takes, pairing old footage with new interviews, could have yielded some fresh insight. Instead—whether because the director didn’t challenge his subjects to think critically about Woodstock or because they were unwilling to do so—we get starry-eyed reminiscences from disembodied voices. The music sounded great, they agree, even if you couldn’t get close enough to see what Hendrix was doing with that guitar. Variations on one attendee’s proclamation that the festival gave everyone present “the freedom to be who you are” abound. And instead of tracing Woodstock’s legacy into the present, which would have necessitated addressing the discrepancy between boomers’ youthful ideals and their adult lives, Three Days leaves us with some vague ideas about how it confirmed the fundamental goodness of humanity. (There’s also no mention of the just-canceled 50th-anniversary event led by the most flamboyant of the original producers, Michael Lang, who had tried to move it from Upstate New York to Maryland three weeks before its scheduled kickoff.)

Although it would’ve been nice if Goodman had spoken with a few people who weren’t so high on Woodstock as an experience, the problem isn’t really that the historical record suffers from a lack of negative reviews. In 2009, amid the 40th-anniversary festivities, essays from people who’d had a lousy time in Bethel flooded the media. “Woodstock was, if not a nightmare, then a massive, teeming, squalid mess,” wrote Mark Hosenball in Newsweek. “If you like colossal traffic jams, torrential rain, reeking portable johns, barely edible food, and sprawling, disorganized crowds, then you would have found Woodstock a treat.” These complaints have, in fact, always been part of the Woodstock legend. They were immediately integrated into the official story as proof of how a temporary community overcame adversity through love, and saw their goodness rewarded with life-saving donations of food from locals and medical care from (ironically) the armed forces.

You couldn’t really fault Wadleigh for buying into this narrative at the time, but half a century later, Goodman’s credulity is puzzling. He gives us sweet interviews with square, middle-aged Sullivan County residents who sent provisions. “Kids are hungry,” says one man. “You gotta feed them.” In both films, locals mention that they have children at the concert or, at least, of about the same age as the throngs; many note how polite the visitors are. Scanning the crowd shots—which certainly included some nonwhite faces, but relatively few of them—I wondered how the local and government responses might have been different for a mostly black gathering of even a fraction of Woodstock’s size. What if, a few months after Stonewall, the free-love fest was predominantly gay instead of straight? Would it even have happened? Was it simply good vibes that kept Woodstock nonviolent? Or does it also matter that Bethel (and Washington) looked at a white, heterosexual crowd with middle-class manners and saw children just like their own?

And what about the Woodstock producers, who didn’t recoup their investment for more than a decade but went down in history as heroes for producing what turned out—thanks to inadequate fencing, not generosity—to be a peaceful free festival? In the most thoughtful account I’ve ever read of what it was like to attend Woodstock, from September 1969, the brilliant New Yorker rock critic Ellen Willis (who actually enjoyed the weekend) expressed her incredulity that Lang and Co. had managed to spin their incompetence as dynamism. “If the festival succeeded in spite of the gross ineptitude of its masterminds, it was mostly because 300,000 or more young people were determined to have a good time no matter what,” Willis argued. Yet she also blasted entitled attendees, for shrugging off “tremendous efforts made by the state, the local communities and unpaid volunteers to distribute cheap or free food and establish standards of health and safety.”

None of this criticism or questioning diminishes Woodstock as a historical moment, one that will remain etched into the history of the 20th century, rock ‘n’ roll, youth culture and the baby boomer generation long after that generation is gone. Yet 50 years later, the task of a film revisiting that weekend shouldn’t just be to rehash and re-hype an event that has long since been documented to excess. Woodstock: Three Days That Defined a Generation is entertaining and lively, and it will surely satisfy viewers looking for a hippie nostalgia trip. But those seeking a more nuanced understanding of what went down on Yasgur’s farm—and why—will have to look elsewhere. 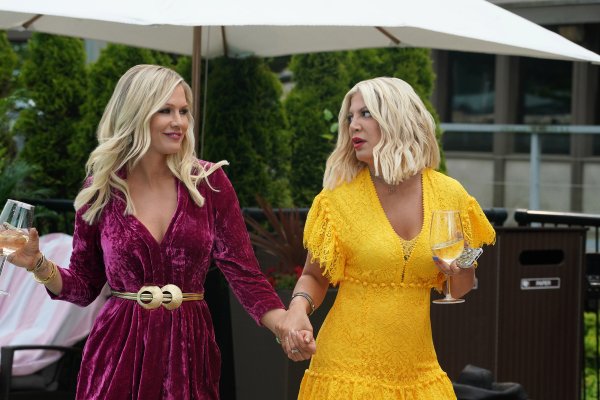 The 90210 Revival Is Weird as Hell—But At Least It's Not Boring
Next Up: Editor's Pick