BH90210 knows what you’re expecting from a revival of the defining teen drama of the 1990s. And in its first few minutes, the show delivers. There’s that iconic credits sequence, with the now-middle-aged original cast posing against a stark white background as the unmistakable instrumental theme plays. Then everyone (minus Luke Perry, who died in March, and the famously divisive Shannen Doherty, who we’ll see a bit later) is at the Peach Pit, an ageless monument to ‘90s-era nostalgia for the ‘50s, as though nothing’s changed since Donna Martin graduated. But this saccharine reunion is over as soon as it gets started. Tori Spelling wakes up from her dream on a plane next to Jennie Garth. The former castmates are en route to an event marking the 30th anniversary of Beverly Hills, 90210—and the first clue that we’re in a dark timeline is that these two former teen queens are flying coach.

Yes, it’s a meta-revival. Premiering Aug. 7 on Fox, the six-episode limited series BH90210 (not to be confused with the five-season reboot from 2008, in which Spelling, Garth and Doherty all had recurring roles) isn’t exactly a sequel to the late mega-producer Aaron Spelling’s hit primetime soap about eight attractive teens growing up in one of America’s most exclusive zip codes. It’s both a timely sendup and another example of anachronistic, cash-grab comebacks in the Fuller House vein. The surviving alums—including Doherty, who doesn’t share any scenes with her co-stars in the two episodes provided to critics—play exaggerated versions of themselves, gamely acknowledging that their careers remain circumscribed by the shallow roles that made them famous. You can go home again, this fun, if uneven, satire allows. But it’s probably going to be weird as hell.

Even more than your typical Peak TV nostalgia trip, this is a show for the fans—ones who not only watched all 304 episodes of Beverly Hills, 90210, but also follow the cast in the tabloids. As they converge in Las Vegas for the anniversary, each star gets a backstory that spoofs their real life. This version of Tori Spelling, who like her namesake has been open about her marital and inheritance woes, is desperate for money when the network cancels her latest reality show. Sometime filmmaker Jason Priestley punches out a young actor who refuses to take acting advice from the man best known as Brandon Walsh on the set of a superhero show he’s directing. Brian Austin Green has been eclipsed by his much-younger pop star wife. (The real-life Green’s actual much-younger wife is actor Megan Fox.) Sharknado star Ian Ziering’s doppelganger is more sentient brand than human. In a nod to the fact that she was cast as teenage Andrea Zuckerman at 29, SAG-AFTRA president Gabrielle Carteris plays a new grandma. Jennie, who’s been married three times in real life, is facing a breakup. Not that anyone else’s relationship is thriving. Still persona non grata among this crew, Shannen opts to teleconference into the reunion.

If the lines between the actors and their fictionalized selves are blurred in these episodes, so are the boundaries between those fictionalized selves and the 90210 characters they can’t escape. That isn’t just another meta touch; it actually makes sense for a group of actors who formed their identities together, in front of the camera. Romantic tensions arise for erstwhile TV couple Jason and Jennie. Like Donna on prom night, Tori gets trashed in Vegas and ends up in trouble. The hilarious spectacle of her smashing the glass case where Donna’s most ridiculous dress is on display like a museum piece makes a strong contender for the most uncannily self-referential image in the history of television—until Tori leverages that stunt into a 90210 revival and uses a Peach Pit diorama populated by creepy dolls of her castmates to track her progress in getting them to sign on.

The tone of BH90210 is bizarre, in other words. While it’s mostly a tight, soapy satire of a decadent industry—the audiovisual equivalent of a beach read that’s smarter than it needs to be—it sometimes gets sentimental. A few undoubtedly heartfelt tributes to Perry land as non sequiturs when slotted in next to, in one case, a scene where Ian’s wife accidentally FaceTimes him while rolling around in bed with another man. A swing toward horror in the second episode just feels like overkill.

But for the most part, this mayhem works. Because the producers of BH90210—a team that includes all seven stars—understand that a straightforward continuation of the original teen drama just wouldn’t work in 2019. The characters aren’t exactly fresh, complex or especially well crafted, and a decent grown-up drama can’t just coast on shiny hair and tight abs. More importantly, the days of unconflictedly reveling in the minor problems of well-off white people (a.k.a. the prosperous Clinton era, which gave us Friends, Frasier, The Nanny, Mad About You, Home Improvement, Ally McBeal, Sex and the City and more) are over. Meanwhile, teen shows that glamorize one-percenters, from both previous iterations of 90210 to The O.C. and Gossip Girl, have felt tone-deaf since the subprime crisis. While they may look to the fluffy sitcoms of the ’90s for comfort, Gen Z kids seek mirrors of their own lives in darker and more diverse fare: Riverdale, 13 Reasons Why, Euphoria.

The decision to do something completely different from teen dramas new and old goes a long way for BH90210. And though the show is in some senses even sillier than its inspiration, the honesty of a story about seven aging C-list celebrities cashing in on nostalgia is unexpectedly endearing. (It also makes the best of a cast with many weak links, particularly in Perry’s absence.) Does that make BH90210 any less cynical as a project? Probably not. For all its self-awareness, the show is its creators’ attempt to have their Peach Pit milkshake and drink it too. Garth and Spelling already let slip, on the Today show, that they’re hoping to make more episodes. But at least the show is something I haven’t seen before. Two months into the worst summer for network TV that I can remember—and that’s saying a lot—it’s worth tuning in for the novelty alone. 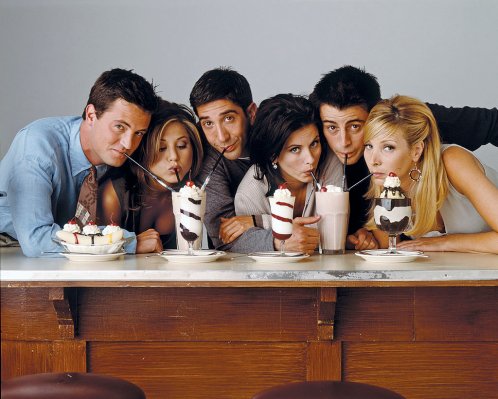 The One Where a 'Friends' Pop Up Opens in New York
Next Up: Editor's Pick