A first-time candidate, the self-help author has faced criticism for her skepticism of vaccines, which stop the spread of deadly diseases such as measles and mumps; her doubts about the benefits of antidepressants used to treat people with clinical depression; and her past remarks that illness is simply an illusion.

Williamson is still polling at less than 1% and remains a distant longshot to win the Democratic nomination, but advocates warn that the higher profile the primary is giving to her unscientific views could do real harm, as research has shown that simply repeating false information can make it seem more credible over time.

“America is having an existential political crisis about Trump. And they’re also in the throes of a massive upheaval about accessing health care,” says Lisa Corrigan, a professor of communication and rhetoric expert at the University of Arkansas. “Those are converging in this moment to make her interesting in a way she would not be in other political moments.”

Williamson has apologized for a few of her most extreme comments and reiterated that she is “pro science,” but has stood by many other controversial remarks and continues to speak in ways that casts doubt on established medical practices.

One of the topics where Williamson courts the most controversy is vaccines. At a campaign event in New Hampshire in June, she told supporters that mandatory vaccinations were “draconian” and “Orwellian,” comparing them to anti-abortion laws.

“To me, it’s no different than the abortion debate,” she said. “The U.S. government doesn’t tell any citizen, in my book, what they have to do with their body or their child.”

She apologized for those comments in a statement on Twitter the next day and has since said she “supports vaccines.”

“I understand that many vaccines are important and save lives,” Williamson wrote in June. “I also understand some of the skepticism that abounds today about drugs which are rushed to market by Big Pharma. I am sorry that I made comments which sounded as though I question the validity of life-saving vaccines. That is not my feeling and I realize that I misspoke.”

However, this was far from the first time that she had doubted the well-established safety of vaccines. She has a long history of questioning vaccination (a view she shares with President Donald Trump.) And Williamson’s apology and subsequent interviews on the topic have shown she remains open to vaccine skepticism.

She did not retract her abortion analogy, for example, and by saying that “many vaccines” are important, she seemed imply that some are not. Williamson has also frequently injected criticism of “Big Pharma” into the vaccine discussion though her concerns are largely about opioids and drug prices. When asked about her stance on vaccines at a presidential candidates forum in Las Vegas on Saturday, she pivoted to a discussion of pharmaceutical companies’ involvement in the opioid crisis and said she wanted more oversight.

In reality, vaccines are rigorously reviewed, strictly regulated by the FDA and extremely safe. People who already know the facts about vaccines are not likely to change their mind because of Williamson, but between one third and one fourth of parents have concerns about vaccinating their children, and those people can be vulnerable to persuasion, says Daniel Salmon, a professor of international health at Johns Hopkins University and director of the Institute for Vaccine Safety.

“My concern would be about those people who haven’t made up their mind, that it could lead them in some way to question their need for, the safety of, or value of vaccines, or the right of the government to compel vaccines,” Salmon says.

In order to keep infectious diseases from spreading, Salmon explains that the public needs 95% of people to get vaccinated indefinitely, and that needs to be true in every part of the country. So if even a few people decide to forgo vaccines in one town, that can lower the community’s immunity and lead to the kinds of outbreaks that have caused serious problems in New York and Washington state.

In addition to her comments on vaccines, Williamson has come under fire for her attitude toward illness (her book A Return to Love says “sickness is an illusion and does not actually exist” and encourages readers to see “sickness as our own love that needs to be reclaimed”), for repeatedly doubting the existence of clinical depression and for attacking antidepressants.

Williamson recently apologized for calling depression “such a scam” and on Friday her campaign put out a statement on “Science, Mental Health and Antidepressants” that said her respect for science is “life long, well known, and resolute.” The statement also said Williamson would boost funding to develop and regulate medications if elected president, and emphasized that she “stays in her lane and does not weigh in on the diagnosis of any individual regarding their medical or mental health condition.”

The last statement came after Williamson told the New York Times that she stood by a tweet she sent in the wake of designer Kate Spade’s suicide implying without evidence that antidepressants may have been to blame. “How many public personalities on antidepressants have to hang themselves before the FDA does something, Big Pharma cops to what it knows, and the average person stops falling for this?” Williamson tweeted at the time.

These comments have not only rubbed mental health advocates the wrong way, but they can prove just as harmful as anti-vaccine rhetoric, doctors say.

Dr. Jessica Gold, a psychiatrist and assistant professor at Washington University in St. Louis School of Medicine, says patients are already up against significant stigma when it comes to mental health, so she would be very worried if they heard these messages from someone influential.

There is legitimate debate about how often to prescribe antidepressants, but research has shown they do help many patients, Gold notes. A meta-analysis in The Lancet last year examined 522 trials and found that all the antidepressants were more effective than a placebo. “It’s very hard to get people to agree to take medication to begin with,” Gold says. “To have extra people being factors in that decision with incorrect information is not particularly helpful.”

In addition to medical experts, disability and health care-focused voters have been vocal in trying to counter what they see as information from a presidential candidate that could directly hurt their community.

One of the prominent voices is Matthew Cortland, a lawyer and health care activist, who has been sharing his concerns about Williamson on social media, and explaining that lower rates of vaccination could spread diseases that can be deadly to those with compromised immune systems, such as babies, people undergoing cancer treatment and others with serious illnesses.

“Like millions of other Americans, I have no choice but to be immunocompromised,” Cortland, who has an aggressive form of Crohn’s disease, said in an email to TIME. “By lowering vaccination rates, Williamson’s anti-vaccination fear mongering makes it more likely that my partner will have to bury me.”

Cortland and other disability advocates have shared their personal experiences on social media in recent days to raise awareness about Williamson’s comments, organizing through hashtags such as #CripTheVote and #INeedMyMedsMarianne. Social media has increasingly provided a space for disability activists to share concerns and reach politicians, even if they don’t live near others in their community or cannot easily travel to in-person events.

“I think we can tell people how certain ideas about ‘self-improvement’ play out when you have serious underlying physical or mental conditions that are persistent and not amenable to simply changing your lifestyle,” says Andrew Pulrang, one of the co-partners who created the #CripTheVote hashtag. “Our disabilities are very real and even though we may succeed, it’s usually because we make accommodations to them, not because we’ve ‘beaten’ them.”

Any implication that people should think their way out of sickness can be especially harmful to people who are already used to being doubted when seeking medical treatment, according to Imani Barbarin, another disability activist who wrote an op-ed last week that Williamson herself discounted on Twitter. For Barbarin, who is black and disabled, the fact that Williamson brought up reparations during the second Democratic debate did not cancel out her views on health.

“People are attracted to her because of reparations talk without realizing the very mindset that she’s pushing forward further marginalizes people of color with disabilities and chronic illness and makes them hesitate in going to the doctor,” Barbarin told TIME.

“Whether you have a cognitive disability, a physical disability, an invisible disability, it’s that same kind of harmful narrative that folks who grew up in certain church communities and are disabled had to deal with,” Carter explained.

He says that many churches are working to be more inclusive, but that hearing the message that you can overcome a disability or chronic illness with positive thinking is something that can make people feel like failures for conditions they cannot control and don’t always want to change.

In responding to the recent criticism of her previous comments, Williamson has said she “never told anyone not to take medicine” but also told Anderson Cooper that she believes “someone who is clergy, someone who is a psychotherapist who is not coming from a psychopharmacological perspective, someone who is a spiritual person, is just as qualified an expert to talk about issues of deep sadness, even depression.”

Corrigan, the rhetoric expert at the University of Arkansas, said these ambiguous answers are reminiscent of Trump’s changing responses to controversial topics. Williamson and Trump also both appeal to an ideal of white individualism, she says, as they use sweeping statements to promise voters they can “make America great again” or “harness love for political purposes.”

“That’s very much about competitive whiteness and privatization as a solution to social ills,” Corrigan says. “It makes her suspicious as someone who could ever be a reasonable advocate for social welfare policies of any kind.” 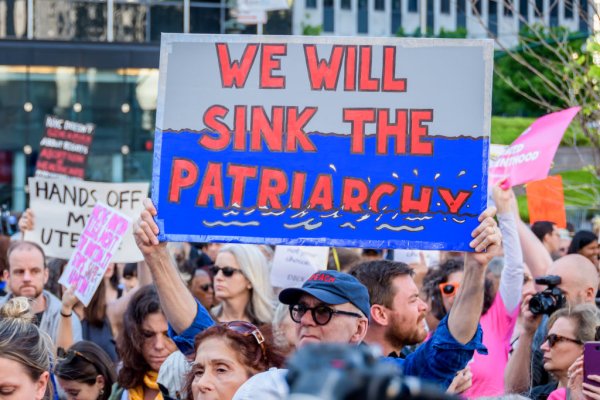 The Right to an Abortion Is Under Threat. But States Are Stepping Up to Protect It
Next Up: Editor's Pick