At the day’s outset, the citywide strike crippled public transportation during the morning commute and forced the cancellation of more than 200 flights out of the city’s airport. Instead of heading to work, lawyers, bankers, teachers and other professionals filed into public parks and squares, joining half a dozen rallies crisscrossing Hong Kong.

In Admiralty district, home to the government’s harbor front headquarters and luxury shopping malls, the boutiques and jewelry stores were mostly shuttered, while outside protesters sought respite from the 91°F heat in any available shade. The subway station and nearby park filled with a sea of black-shirted protesters, who once again blockaded Harcourt Road, a central thoroughfare that has frequently been seized by demonstrators.

As protesters began congregating around the legislative complex, people handed out bright yellow ribbons and chanted “reclaim Hong Kong, revolution of our time!”

“Why are you guys not at work today?” a spokesperson from the Hong Kong Confederation of Trade Unions said from the park’s stage. “We’re on strike!” protestors responded.

Demonstrators take shelter under their umbrellas as they sit on the ground at Tamar Park outside the Chief Executive's Office in Hong Kong on Aug. 5, 2019.
Paul Yeung—Bloomberg/Getty Images

Monday’s strike comes as the city enters its ninth consecutive week of protests. As the political crisis engulfing the Chinese enclave deepens and the government still refuses to accede to protesters’ demands—which include the resignation of the city leader—tactics have shifted from marches and sit-ins to actions that disrupt daily life. By paralyzing public transportation and bringing businesses to a standstill, protesters aimed at the heart of the city’s reputation as Asia’s buzzing financial center.

“I hope that if enough people come out to strike today, and it looks like there is, that it will be enough to make the government respond to our demands,” said a striking NGO staffer who asked to be identified only as Ms Lee.

Hong Kong’s embattled leader Carrie Lam warned during a press conference Monday that attempts to immobilize the city were instigating a “very dangerous situation.” She also accused protesters of “trying to ruin Hong Kong and completely destroy the livelihood of seven million citizens.”

Yet many Hong Kongers readily put their livelihoods at stake Monday, skipping a day of work and even jeopardizing their jobs to signal to the government the growing discontent pervading the territory.

“I may not go to the frontlines, I may not be able to help with first aid, but I can take a day off work,” says Eliza, a 30-year-old paralegal who estimated that one-third of her colleagues joined the strike.

Sparked by an unpopular extradition bill, the mass demonstrations that kicked off in June have since broadened to include demands for greater democracy and even self-determination. The protests have brought to the fore long simmering resentments over the semiautonomous city’s political landscape, and Beijing’s place in it.

The city’s administration is under mounting pressure from Beijing to rein in the protests, which have increasingly targeted China’s sovereignty over the former British colony. Protesters have defaced the national emblem at the central government’s liaison office, and over the past weekend, threw a Chinese national flag into the harbor.

Protesters stand amid tear gas fired by the police in Tai Po district during a general strike in Hong Kong on Aug, 5, 2019.
Philip Fong—AFP/Getty Images

Monday’s rallies began peaceably, with demonstrators assembling in the afternoon at seven locations across the city. At Admiralty’s Tamar Park, some people unrolled picnic mats, and one mother brought a playpen.

At Hong Kong’s Disneyland, dozens of workers also decided to join the strike, forcing some of the theme park’s rides and attractions to close for the day.

“Disneyland is a happy place. But for the past few weeks, when we come into work, we talk about all the clashes, the unhappy incidents that happened over the weekend,” Ellen Cheng, chair of the Hong Kong Disneyland cast members’ union, tells TIME.

“We’re sorry for the inconvenience caused, [but] it’s most important at this present moment that we show the government that this chaos that is happening now does have an effect on our society,” she adds.

The demonstrations devolved into clashes by mid-afternoon. Rounds of tear gas were fired outside the satellite town Tin Shui Wai’s police station before 3 p.m. Police said the premises was surrounded by protesters hurling stones and “posing a serious threat to the citizens on site,” and defended the use of tear gas, saying it was fired “after repeated and futile warnings.” Less than two hours later, police set off tear gas at the rallies in Admiralty, where protesters were reportedly throwing eggs at bricks at the government offices, and Wong Tai Sin, a working-class neighborhood that was the scene of clashes over the weekend.

At a press conference Monday afternoon, police said they have fired approximately 1,000 canisters of tear gas, 160 rubber bullets and 150 “sponge bullets” since the protests began on June 9. They also said 420 people have been arrested, including some on riot charges, which carry up to a 10 year prison sentence. 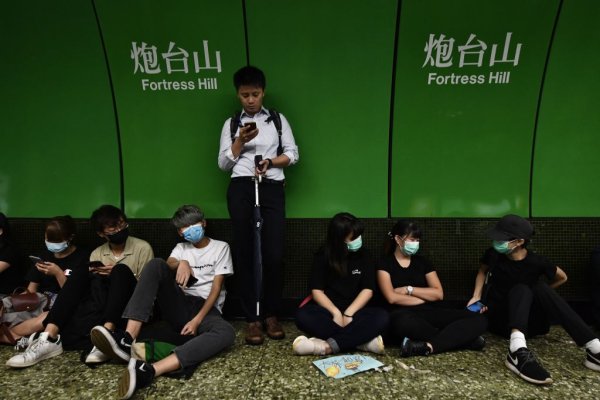 Citywide Strike Brings Hong Kong to a Standstill
Next Up: Editor's Pick