President Donald Trump said on Friday that Congressman John Ratcliffe was withdrawing from consideration to serve as the Director of National Intelligence, sidestepping what had already become a difficult confirmation battle.

The announcement, which came less than a week after Trump announced his intention to nominate Ratcliffe for the position, landed amid a series of news reports indicating the Texas Republican had embellished his biography, concerns in Congress over the President’s attempt to install a partisan in a role that oversees a constellation of 17 intelligence agencies and the prospect of an exodus of intelligence officials over his plan to block the ascension of a veteran deputy.

“Our great Republican Congressman John Ratcliffe is being treated very unfairly by the LameStream Media. Rather than going through months of slander and libel, I explained to John how miserable it would be for him and his family to deal with these people,” Trump said in a Friday tweet. “John has therefore decided to stay in Congress where he has done such an outstanding job representing the people of Texas, and our Country. I will be announcing my nomination for DNI shortly.”

“While I am and will remain very grateful to the President for his intention to nominate me as Director of National Intelligence,” Ratcliffe tweeted, “I am withdrawing from consideration.”

Ratcliffe’s rapid withdrawal comes after reports showed that he had inflated and misrepresented his relevant experience for a role that has mostly been held by decorated military officers and officials with decades of intelligence and foreign policy experience.

The 2004 Intelligence Reform and Terrorism Prevention Act (IRTPA) dictates that the Director of National Intelligence must have “extensive national security experience.” Having served just seven months on the House Intelligence Committee, Ratcliffe pointed to his time as a “federal terrorism prosecutor” as a qualification for the post. He said that he had convicted suspects accused of funneling funding to Hamas—a case he did not play a substantial role in, according to an ABC News investigation. His official biography also touted that he had “put terrorists in prison.” Asked to provide details, Ratcliffe’s office was unable to back that up, forcing aides to clarify claims that he had won terrorism convictions.

Ratcliffe also said that while serving as U.S. attorney in East Texas in 2008, he “arrested 300 illegal aliens in a single day,” a claim that is still on his House website despite news reports knocking it down. While he played a role in bringing charges against 280 non-citizens working for a chicken processing plant, Ratcliffe did not arrest anyone. Of those poultry workers, only 45 were charged by prosecutors in Ratcliffe’s office. Six of those cases were dismissed, two of them because the subjects turned out to be U.S. citizens, according to court documents obtained by the Washington Post.

Senate Democrats had vowed to block Ratcliffe’s nomination, foreshadowing a bitter fight that would have caused headaches for the White House and put Senate Republicans in a difficult position. “Congressman Ratcliffe is the most partisan and least qualified individual ever nominated to serve as Director of National Intelligence,” Sen. Ron Wyden, a member of the Intelligence Committee, said earlier this week. “Confirming this individual would amount to an endorsement of this administration’s drive to politicize our intelligence agencies.”

There were rumblings of unease on the Republican side as well. GOP Sen. Rand Paul had already expressed concerns about Ratcliffe’s record. Richard Burr, who chairs the Senate Intelligence Committee, warned Trump that nominating Ratcliffe could inject politics into the nonpartisan work of the intelligence agencies, sources told TIME. A Burr aide said the Senator had not taken a position on Trump’s desire to choose Ratcliffe. “Senator Burr did not offer guidance or offer his opinion to the White House regarding Congressman Ratcliffe’s nomination,” the aide said, speaking only on condition of anonymity. (On Tuesday, Burr’s office issued a statement saying, “When the White House submits its official nomination to the Senate Intelligence Committee, we will work to move it swiftly through regular order.”)

Just days before Trump nominated him, Ratcliffe had gained national attention for his sharp questioning of former special counsel Robert Mueller, in which he upbraided Mueller for placing the President of the United States “below the law.”

In his statement announcing his withdrawal on Friday, Ratcliffe insisted he would have led the intelligence community with “the objectivity, fairness and integrity that our intelligence agencies need and deserve.”

For Trump and the intelligence community, the battle is far from over. The President, according to two officials with knowledge of the matter who requested anonymity because they were not authorized to comment publicly, has decided to block Principal Deputy Director of National Intelligence Sue Gordon, who is widely admired on Capitol Hill and among intelligence officials, from rising to the role of acting DNI when outgoing chief Dan Coats leaves the post on Aug. 15.

In doing so, Trump would circumvent the IRTPA, which states that the principal deputy Director of National Intelligence will fill any vacancy in the top U.S. intelligence post.

Coats’ departure, coupled with news that Trump planned to bypass Gordon, threatens to spur an exodus of veteran intelligence analysts already fed up with Trump’s disregard for their expertise and analysis and emphasis on personal loyalty, officials at three U.S. intelligence agencies told TIME on Friday.

Speaking to reporters late Friday, Trump said he would consider Gordon for the acting DNI role. “Sue Gordon is there now and I like her very much,” he said. “We’ll make another choice, and Sue will be — she’s there now, and certainly she will be considered.” 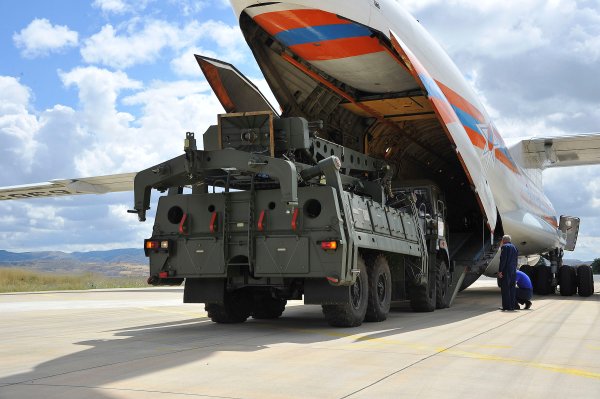 How President Trump Is Undercutting Pompeo in a Dispute Over Turkey's Purchase of a Russian Missile System
Next Up: Editor's Pick