The fluke of a humpback whale can be seen as it prepares to dive while feeding in the Stellwagen Bank National Marine Sanctuary May 10, 2018 near Gloucester, Massachusetts. - The humpbacks were feeding on sand eels by utilizing the bubble net method to trap the eels and then swimming up through it with their mouths open. (Photo by Don EMMERT / AFP) (Photo credit should read DON EMMERT/AFP/Getty Images)
DON EMMERT—AFP/Getty Images
By Megan McCluskey

Humpback whales and sea lions usually manage to stay out of each other’s way while feeding on the same school of anchovies. But as was recently documented by wildlife photographer Chase Dekker, accidents can and do happen.

While on a routine whale-watching trip in Monterey Bay, California, earlier in July, Dekker managed to snap a truly fascinating shot of a sea lion getting caught in a humpback whale’s open mouth after it didn’t get out of the emerging whale’s way quickly enough.

“Just the other day I witnessed something out on Monterey Bay I had never seen before,” Dekker captioned the photo. “While the humpbacks were lunge feeding on a school of anchovies, a sea lion apparently didn’t jump out of the way fast enough and got trapped inside the whales mouth!”

But don’t worry, it’s likely that neither animal was harmed by the incident. Since humpbacks are filter-feeders with esophagus that stretch to a maximum diameter of 12-15 inches, according to National Geographic, they have no interest in trying to swallow a sea lion.

“At some point the sea lion escaped and the whale seemed fine too as it continued to feed, but it must have been a strange experience for both parties! That sea lion had the true ‘Jonah Experience!'” Dekker added.

The photo has gone viral since Dekker shared it on social media last week, and for good reason. Christie McMillan, a biologist with the Marine Education and Research Society in British Columbia who specializes in humpback feeding behavior told National Geographic that she’s never even heard of a sea lion getting trapped in a humpback’s mouth, let alone seen a photo of it.

“The photo blew our minds,” she said. “I have never seen this happen with a sea lion. Nor have I ever heard of it.” 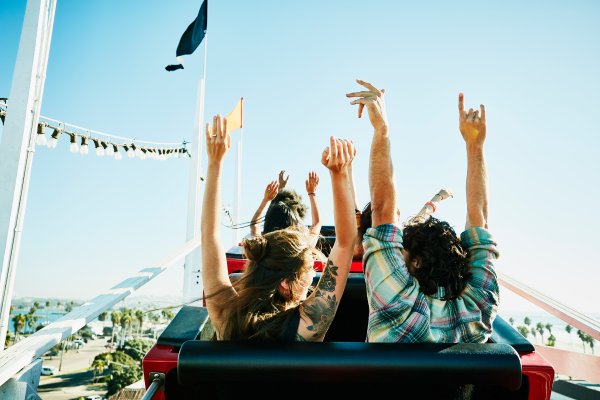 Video Captures Alarming Moment Girl on Rollercoaster Gets Hit in the Face by a Bird
Next Up: Editor's Pick