7 Books That Were Better Than Their Movie Adaptations

It’s a reader’s rite of passage to walk into a movie theater to see a favorite book come to life and walk out bitterly disappointed. Sometimes, there’s no softening the truth: what you read on the page is so much better than what you watched on the screen. Here, seven beloved books that are undoubtedly better than their film adaptations.

Passionate fans of this young adult classic will agree that a true film adaptation of Ella Enchanted does not yet exist. Levine’s 1997 retelling of Cinderella, which earned a prestigious Newbery Honor, was adapted for the screen in 2004, with Anne Hathaway in the starring role. But the movie took significant liberties with Levine’s original plot, adding characters and excluding beloved scenes. The moods of the film and the book feel disparate. As David Rooney wrote in Variety, “The filmmakers also pushed the tone into a far more jokey comic realm, which dilutes the romantic-magical chemistry of the book, downplaying its central idea of a ‘Cinderella’ overhaul.”

The Giver by Lois Lowry

This dystopian young-adult novel has fascinated readers for over 25 years. The Giver tells the story of 12-year-old Jonas, who inhabits a society that lives by the principle of “Sameness,” favoring equality over individuality. The book has been widely celebrated, winning the 1994 Newbery Medal and appearing on school reading lists across the country. But the 2014 film adaptation missed the mark. Despite a notable cast, including Jeff Bridges, Meryl Streep and Taylor Swift, the movie failed to win over audiences in the same way the novel did. Released during a torrent of young adult dystopian adaptations including The Hunger Games and Divergent, The Giver echoed the same themes of young heroes and heroines rising up against society, but added little to the genre.

The Scarlet Letter by Nathaniel Hawthorne

This 1850 work of historical fiction about the Puritan Massachusetts Bay Colony in the 1640s has inspired a number of adaptations to film, page and stage, but the most bizarre of these may be the 1995 film starring Demi Moore, Gary Oldman and Robert Duvall. It was labeled “trashy and nonsensical” by Caryn James in the New York Times, and is frequently disparaged for changing much of the source material, including the ending. Receiving a shockingly low score of 13% on Rotten Tomatoes, this movie took home the award for the Worst Remake or Sequel at the 1995 Golden Raspberry Awards.

The Glass Castle by Jeannette Walls

Walls’ incredible 2005 memoir tells the story of her dysfunctional upbringing: she and her three siblings suffered through turbulent years in a house afflicted with poverty, alcoholism and violence at the hands of their parents. The 2017 movie adaptation was praised for its impressive performances by Brie Larson as the author and Woody Harrelson as her father, Rex, but was criticized for sanitizing the gritty parts of this powerful story, like the grotesque and unsafe conditions Walls and her siblings experienced as children. “The film keeps selling easy uplift even in a coda featuring Walls and her real parents when it most needs to generate raw emotion and blunt truth,” Peter Travers wrote for Rolling Stone.

The Golden Compass by Philip Pullman

The Golden Compass, published in 1995, is the first novel in the beloved young-adult fantasy series, His Dark Materials, a magical story set in a parallel universe. This first part of the trilogy follows a young girl named Lyra as she embarks on a rescue mission to the Arctic. The widely panned 2007 film took five years to complete, slowed down by disagreements over the script and the direction. The studio bought the rights to the trilogy in 2002 and commissioned Tom Stoppard to write the screenplay. Chris Weitz was hired to direct. But Stoppard’s script was rejected and Weitz was fired. In his place, the studio hired Anand Tucker to direct, though Tucker resigned in 2006. Then Weitz returned to write the screenplay and direct the project. The result was a disappointing (and extremely expensive) movie that cut or changed many elements of the novel.

The Lovely Bones by Alice Sebold

This bestselling novel from 2002 tells the story of a teenage girl who is raped and murdered and watches her family grieve from heaven. The 2009 film adaptation boasts terrific performances by Saoirse Ronan and Stanley Tucci as the girl and her attacker, but has little else to offer. The fine balance of sentiment and violence that Sebold strikes in the novel is lost in the movie. The film “strikes clashing tones, veering from lightheartedness to heavy-handedness,” Claudia Puig wrote in USA Today, adding that the device of main character narrating from heaven “works on the page [but] comes off artificial and emotionless on-screen.”

The Girl on the Train by Paula Hawkins

Paula Hawkins’ 2015 thriller was an instant bestseller, heralded as the next Gone Girl. It tells the twisty story of an alcoholic woman who becomes obsessed with a seemingly perfect couple she spots from the window of a train she rides each day, only to be dragged into a police investigation when the wife goes missing. The 2016 film, starring an impressive Emily Blunt, feels more like melodrama than thriller. Blunt’s performance was highly praised, but the film doesn’t rise to her level. “Blunt gives Rachel multiple dimensions — we could never view her as just a stewy mess,” TIME’s Stephanie Zacharek wrote. “But the movie’s surprise (or perhaps not-so-surprising) twist doesn’t serve its lead character well, at best merely justifying her stalkerish behavior.” 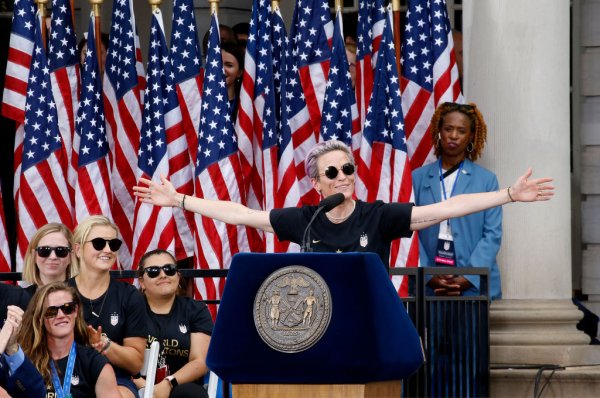 Megan Rapinoe Is Writing a Book About Social Justice
Next Up: Editor's Pick