'This Is Not Acceptable': NYPD and Mayor De Blasio Slam Videos of People Throwing Water on Police Officers

Over the past few days, as temperatures in New York City rose close to triple digits, two incidences of police officers getting water thrown at them sparked outrage from the New York Police Department and Mayor Bill de Blasio.

One video posted Monday, shows police officers in Harlem getting water poured on them as they attempt to arrest someone. The video also shows someone throwing an empty bucket and hitting one of the officers.

According to NYPD Chief Terence Monahan, the officers were responding to a disorderly group, and had been trying to “chase them away from a hydrant” when they recognized a man who had a warrant out for his arrest. As the policemen were arresting him, people threw the empty bucket and water on them.

Another video shot on Saturday in Brooklyn shows police officers walking away as someone splashes them and then pours a bucket of water on one of the officers’ heads. CBS reported that the officers had also been responding to a call about a “disorderly group.” The video surfaced on Instagram on Monday.

He described one of the incidents as confrontational while the other was not. “This is serious stuff. Don’t do it. Don’t aid and abet it,” De Blasio warned.

Monahan spoke about the incidents at One Police Plaza on Tuesday afternoon during the Annual Incentive Awards Ceremony, which honors longtime officers. According to recording sent to TIME from the NYPD, he said that the department was investigating both incidents.

“Our detectives are the greatest in the world and we will identify who was involved,” he said. “That is not acceptable to our men and women who are out there keeping people safe.”

“Any cop who thinks that that’s all right— that they can walk away from something like that— maybe should reconsider whether or not this is the profession for them. We don’t take that,” Monahan said. His comments were met with applause.

On Monday, Monahan had tweeted about the event in Harlem, calling the actions “reprehensible,” while former Mayor Rudy Giuliani called the incidents a “result of left wing policies” and blamed de Blasio for the disturbance. He also took the events as a chance to criticize de Blasio’s presidential candidacy.

De Blasio responded to Giuliani’s tweet by saying, “When you disrespect our NYPD officers, you disrespect ALL New Yorkers. We don’t tolerate that in our city.” He then went on to say that the city has actually seen a decrease in crime under his tenure as mayor.

The Mayor’s Office did not respond to a request for additional comment. 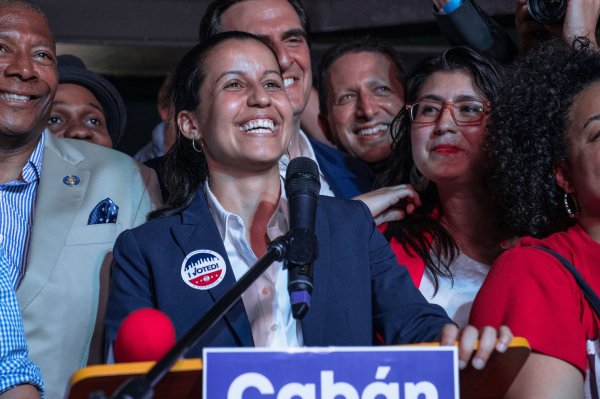