Boris Johnson will succeed Theresa May as the U.K.’s prime minister after he defeating Jeremy Hunt in a Conservative Party leadership race. World leaders have been showing their support on Twitter.

President Trump was one of the first to congratulate Johnson by declaring: “He will be great!”

In comments to the conservative youth organization Turning Point USA, Trump also said Johnson was “tough” and “smart” and claimed he is popular in the UK because he’s known as “Britain Trump”.

“We have a really good man who’s going to be the prime minister of the U.K. now,” said Trump. “They call him Britain Trump. And people are saying that’s a good thing. They like me over there. That’s what they wanted. That’s what they need.”

Thousands protested against Trump in central London when he visited the U.K. in June. Trump dismissed the protests as “fake news” during a press conference with Theresa May.

Chief Brexit negotiator Michel Barnier said he looked forward to working constructively with Johnson towards the divorce with the E.U. Johnson was a lead figure in the campaign to leave the E.U. in the 2016 referendum, and has repeatedly said he will keep the option of a “no deal” Brexit (leaving the bloc with no arrangements about what the relationship will be like in the future) on the table.

The Taoiseach (Irish PM), Leo Varadkar, also congratulated Johnson and said he looked forward to continuing Brexit talks and prevent a hard Irish border, the issue that has come to symbolize the challenges of Brexit.

Nigel Farage asked if Johnson would stick to his “do or die” pledge to deliver Brexit by October 31 deadline.

Italy’s interior minister Matteo Salvini, the leader of the far-right Lega, congratulated Johnson for being called “more dangerous than the Lega” by Tony Blair in an interview in Italian newspaper La Repubblica.

“Well done Boris Johnson. The fact that the left portray you as being ‘more dangerous than the Lega’ makes you even more likable,” he tweeted.

Canadian prime minister Justin Trudeau congratulated Johnson and said he looked forward to maintaining the close friendship between Canada and the U.K.

Ivanka Trump initially seemed to be mentioning the Jamaican capital when she congratulated Johnson on “becoming the next Prime Minister of the United Kingston.” The tweet has since been deleted, reported Politico, and a replaced with a corrected one. 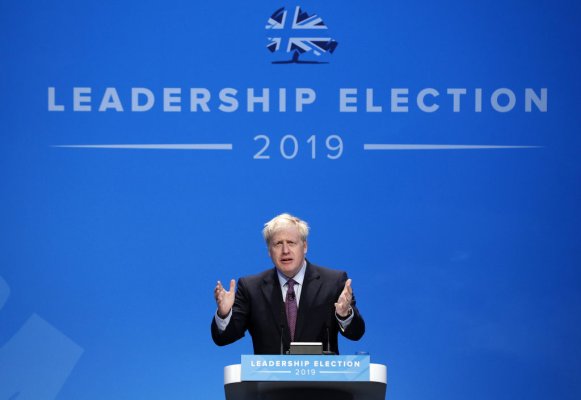