75,000 protestors gathered in central London’s Trafalgar Square on Tuesday to show their anger over U.S. President Trump’s visit to the U.K, according to the Stop Trump coalition. Meanwhile, Trump dismissed the protests as “fake news” during a press conference with British Prime Minister Theresa May.

He insisted that he’d only seen “thousands of people” who had been cheering during his visit, and a “small protest” earlier Tuesday. “So a lot of it is fake news, I hate to say,” he said.

As the President sat down for discussions with British Prime Minister Theresa May at Number 10 Downing Street, protestors marched from Trafalgar Square to Parliament Square with placards which spelt out their disdain for Trump. “Stand up against Trump”, “Make racists afraid again”, “Dump Trump” were some of the messages being raised in the crowd.

While thousands turned out, the protests were significantly smaller than the anti-Trump demonstrations that emerged during the President’s visit to the U.K. last July. About 250,000 people flooded the center of London, and an estimated total of 400,000 people protested across the U.K, resulting in a large-scale police and security operation, in which more than 10,000 police officers were deployed.

The demonstrations brought together a range of campaigners focusing on issues such as women’s rights, climate change and refugee support. Handmaids Against Trump, a women’s rights group, stood dressed in red cloaks and white hats, with solemn expressions. Their placards read “The Handmaid’s Tale is not an instruction manual” and “Beware for I am fearless therefore powerful”.

Susan Paxton, a Handmaids Against Trump activist and a doctor who specializes in women’s reproductive health, criticized the President’s appointment of conservative justices. She tells TIME that such appointments “undermine women’s reproductive rights” and called the recent abortion ban in Alabama “disgusting”. Trump has spoken openly about his opposition to abortion and promised to only appoint “pro-life” judges.

Handmaids Against Trump protest against the rollback in reproductive rights under U.S. President Trump at the anti-Trump demonstration in central London on Tuesday 4 June 2019.
Madeline Roache

Another protestor and environmental campaigner Joel Benjamin says the U.S. withdrawal from the Paris Agreement “undoes a post-war legacy of international cooperation and governance to protect the environment”. In June 2017 Trump announced that the U.S. was pulling out of the 2015 Agreement, which fights global warming by accelerating investments needed for a sustainable low carbon future.

Eva Bonham, 68, an activist from the environmental group Extinction Rebellion, held a placard that read “Trump has pissed off grandma”. Bonham travelled from Derby, some 130 miles northwest of London, to protest not only against Trump’s climate change denials, but also because he’s “separated children from their families, he’s putting up a walls, he’s divisive. We want strong relations with America but we don’t approve of Trump.”

Humanities student, Nayana Prakash, 25, says that with the U.K’s upcoming elections “a lot of people are concerned about how British politicians, like Boris Johnson, appear to support Trump and how that reflects on our own politics.” Johnson is one of 12 candidates to become leader of Britain’s ruling Conservative party.

Yesterday, Trump and First Lady Melania Trump were greeted by the monarch at Buckingham Palace on the first day of their three-day state visit. The President called The Queen “the spirit of dignity, duty, and patriotism that beats proudly in every British heart” while the Queen praised the enduring alliance between the U.K. and the U.S.

In the backdrop of the ceremonial welcome, controversy stirred over a row between Trump and London Mayor Sadiq Khan. The President unleashed a series of tweets calling the Mayor “dumb” and “incompetent” before Air Force One touched down in the U.K.

Even ahead of President Trump touching down in the U.K., activists went above and beyond to show Trump that he’s not welcome in the U.K. An anti-Brexit group “Led by Donkeys” used large-scale images projected onto London landmarks to protest Trump’s visit. On Monday afternoon Led by Donkeys projected an image of President Obama’s approval ratings compared to Trump’s on the Tower of London. Obama had a 72% U.K. approval rating, while Trump had a 21%, according to YouGov statistics cited by the group.

The group also projected a video of Brexit supporter Boris Johnson criticizing Trump onto Big Ben. “I think Donald Trump is clearly out of his mind,” Johnson says in the clip, speaking about Trump’s proposed Muslim ban.

A large security operation has been in place with over 2,500 officers deployed. “This is a multi-faceted security operation, and whilst the Met [police] has a responsibility to ensure the right to peaceful protest, this needs to be balanced with the complex requirements of this policing plan,” according to a press release issued on Saturday June 1. Nearly 2,600 officers were deployed, the Metropolitan Police tweeted yesterday.

But activists hope Trump won’t be able to ignore the 20 foot blimp depicting the President as a baby in a diaper that has been flying 30 foot in the air above the protesters.

Labour leader Jeremy Corbyn, who has ambitions of being Prime Minister within months, led the protests and delivered a speech in Parliament Square. After boycotting the royal banquet on Monday, Corbyn said the demonstration was a chance to “stand in solidarity” with those Trump has “attacked in America, around the world and in our own country,” in a tweet.

Benjamin says he thinks less people protested because of work commitments. Last year’s protests fell on Friday, which may have made it easier for people to take time off work, he says. “I don’t think it matters whether there are thousands or hundred of thousands. What we symbolise, opposition to Trump, is the same,” Benjamin says. 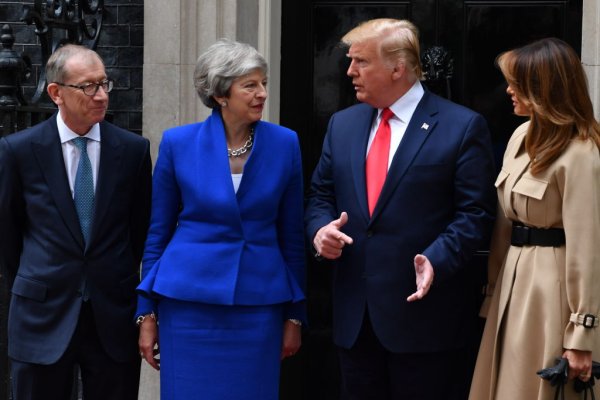 President Trump Meets Theresa May
Next Up: Editor's Pick