The Strait of Hormuz Is at the Center of Iran Tensions Again. Here's How the Narrow Waterway Gained Wide Importance

The Strait of Hormuz is only 21 miles wide at its narrowest point, but it’s once again the biggest waterway in the news headlines, after Iran seized a British oil tanker in what is widely regarded as the world’s most strategically important passage for international trade. Twenty percent of the global oil supply flows through the Strait, which links the Persian Gulf with the Gulf of Oman and the Arabian Sea. And though it is technically regulated by the United Nations Convention on the Law of the Sea of 1982 (UNCLOS), Iran has signed but not ratified that convention and has historically acted to protect its interests in the passage.

The Strait’s geopolitical significance means it has long been a focal point of international tensions between Tehran and the West, which have increased in recent months. In the latest escalation on July 19, Iranian authorities seized the British-flagged Stena Impero oil tanker, claiming that it was “violating international maritime rules.”

Former Iranian Prime Minister Hoveida once called the Strait of Hormuz “our jugular vein,” and in April 1959, Iran attempted to alter the legal status of the Strait by expanding the country’s territorial sea and declaring that only “innocent passage” was permitted through the area. In July 1972, Oman did the same thing, meaning that the Strait was “closed” and was essentially a self-declared combination of Iran’s and Oman’s territorial waters. Throughout the 1980s and 1990s, both Iran and Oman made several declarations and claims over the Strait that were inconsistent with international maritime law, despite both countries having signed UNCLOS (only Oman has ratified the convention).

Strait of Hormuz, Abu Musa and the Tunbs political map. The Strait is the only sea passage from Persian Gulf to Arabian Sea and one of the most strategically important choke points in world
Peter Hermes Furian—Getty Images

Here’s more on the dramatic recent history of the world’s most crucial oil choke point.

For most of the 1980s, Iran and Iraq were embroiled in conflict, as Iraq sought to become the dominant power in the Gulf following the 1979 Iranian Revolution.

As TIME reported in a cover story about the Persian Gulf conflict in October 1980, the war wasn’t just pitting Iraq against Iran, but also the U.S. against the former Soviet Union. President Jimmy Carter had in 1980 committed to keeping the Strait open for transport, and the Soviet Union was prepared for the American military to step in to enforce that position — but officials in Washington feared the USSR would have an advantage if that happened, given that it shared a border with Iran and supplied arms to Iraq.

In 1984, the conflict between the two countries moved to the Strait, in what was dubbed the Tanker War.

Under the leadership of Saddam Hussein, Iraq started targeting Iran’s oil tankers. As TIME reported in April that year, Iran at the time was exporting 2.6 billion barrels of oil per day through the waterway. By targeting the tankers, Iraq hoped to cripple Iran economically and force the closure of the choke point. The danger of the Strait closing had reached such a level in 1987 that a U.S.-led naval intervention began, to protect the tankers. As historian Martin S. Navias has written, that U.S. intervention “ensured freedom of movement for international shipping in the Gulf and eventually also increased pressure on Tehran to seek peace with its neighbor,” leading to the end of the Iran-Iraq conflict in 1988.

But in July 1988, a month prior to the end of the Iran-Iraq war, the U.S. warship Vincennes shot down an Iranian airliner over the Strait of Hormuz.

Iran Air Flight 655 was traveling en route from the Iranian city of Bandar Abbas to Dubai, and was said to have “exploded in the sky” after being targeted by two surface-to-air missiles, according to TIME’s report on the incident. Officers on board the Vincennes mistakenly identified the Airbus 300 as an Iranian F-14 fighter jet that they perceived to be attacking the U.S. ship. All 290 people on board, most of them Iranian citizens, died.

Against the tense atmosphere of the ongoing conflict affecting the Strait, the incident elicited fury in Iran. “America’s crime today in downing an Iranian Airbus is…new evidence of American crimes and mischiefs, crimes which expose American’s nature more than ever before,” said Radio Tehran. The same day of the incident, President Reagan dispatched a five-paragraph note to Iran expressing “deep regret” over what happened, but publicly called the tragedy an “understandable accident.”

Despite seeking international condemnation of the U.S. at the U.N., Iran failed, eventually settling for a statement that “deplored” the incident and promised an investigation. The following month, the Pentagon declared that no one would be punished for the incident, including the captain of the USS Vincennes, because “these mistakes were not due to negligence or culpability.” Although the U.S. and Iran reached a settlement at the International Court of Justice in 1996, requiring the U.S. to pay $61.8 million to the families of the Iranian victims, there has to date been no public or official admission of responsibility or apology from the U.S.

Today’s tensions can be traced back to a serious flashpoint in the dispute between Iran and the U.S., starting at the end of 2011 and stretching into 2012.

In December 2011, Iran’s navy chief told state television that it would be “very easy” for the country’s forces to shut down the choke point, declaring that “Iran has comprehensive control over the strategic waterway.” Just a month later, Iran again threatened to formally block the Strait as retaliation for U.S. and European sanctions targeting its oil revenue, aimed at deterring the country’s pursuit of their nuclear program. Dual naval exercises by the U.S. and Iran took place in the Strait over this period, with both sides trading barbs over the other’s presence throughout 2012.

Seizure of the Stena Impero

Last year, President Trump withdrew the U.S. from the Iran nuclear deal and imposed more sanctions on the regime. The deal, which had been implemented in 2015, was designed to restrict Iran’s nuclear ambitions in return for ending severe sanctions. In August 2018, the Trump administration imposed a first round of new sanctions on Iran, and then a second round in November that targeted the country’s banking and oil sectors. Since then, fiery rhetoric has come from both sides, escalating to Trump’s declaration of an emergency over “the malign influence” of Iran in May this year and the deployment of 1,500 additional troops to the Middle East. Iranian President Hassan Rouhani also said in May that the country would begin stockpiling extra low-enriched uranium in response to the U.S.’ campaign of “maximum pressure.”

Against this backdrop, activity in the Strait of Hormuz too has increased in recent months, culminating in the seizure of the Stena Impero.

On May 12, four ships, including two Saudi oil tankers, were attacked in the Gulf just outside the Strait. U.S. officials said Iran was responsible for the attack, which Tehran denied. Just a month later on June 13, a similar incident happened involving two tankers, one Norwegian and the other Japanese. Iranian officials suggested that the seizure of the Stena Impero was a response to the U.K.’s role in seizing an Iranian oil tanker off the coast of Gibraltar earlier in the month. Britain’s foreign secretary has announced plans to deploy a Europe-led “maritime protection mission” in response, but was clear to distance London’s policy from Washington’s campaign of “maximum pressure.”

Whatever form that protection mission takes, the tension it brings to those waters won’t be new. 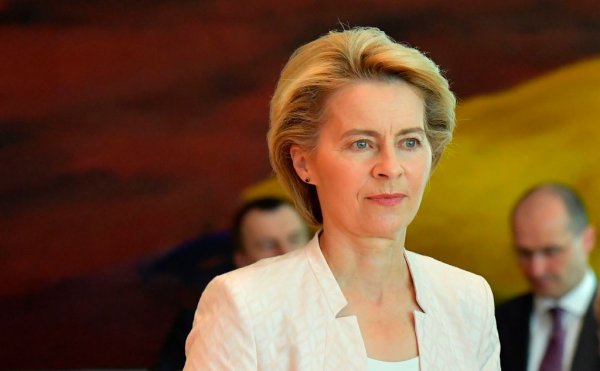 The Quick Read About… the New President-elect of the European Commission
Next Up: Editor's Pick