The memorial for the Icelandic glacier is the first of its kind. The words are written by Icelandic author and poet Andri Snaer Magnason.
Grétar Már Þorvaldsson / Málmsteypan Hella
By Currie Engel

Iceland is mourning the loss of one of its famous glaciers, Okjökull Glacier, in an official memorial ceremony that will take place on August 18. Following an “Un-glacier tour” led by two Rice University anthropologists, the attendees will install a special plaque with a somber inscription, “a letter to the future,” which will commemorate the sad occasion.

The formerly-massive body of ice, commonly referred to simply as “Ok glacier,” lost its glacier status in 2014 after melting down to only 0.386 square miles, or 6.6% of its original 5.8 square miles, The Guardian reported. Scientists cite global warming as the cause of this change in the glacier’s mass. The glacier is now categorized as something glaciologists call “dead ice,” which means that the glacier has stopped moving and has melted down into a different type of terrain called moraine, an accumulation of clay, silt, sand and gravel.

A 2018 documentary called Not Ok details the events of the glacier’s demise, and actually prompted the idea for the creation of a memorial. Produced by Rice University anthropologists, Cymene Howe and Dominic Boyer, and narrated by former Reykjavík mayor, Jón Gnarr, the film helps bring the dire effects of climate change to life in the form of a glacier-turned-narrator who talks at what Howe calls “mountain speed”— a slowed-down version of the former mayor’s voice. Howe tells TIME that it is really just “a small story that tells a much bigger story about climate change.”

The documentary’s website calls this memorial “the world’s first monument to a glacier-that-was.”

Understanding the implications this event has on the Icelandic community, the anthropologists tasked famous Icelandic writer Andri Snaer Magnason with eulogizing this glacier and warning the future of what is to come. The chilling inscription on the plaque reads:

“Ok is the first Icelandic glacier to lose its status as a glacier. In the next 200 years, all our glaciers are expected to follow the same path. This monument is to acknowledge that we know what is happening and what needs to be done. Only you know if we did it.”

The memorial plaque also notes the amount of carbon dioxide in the atmosphere, which is currently 415 parts per million.

But Ok isn’t the only glacier that scientists are concerned about. The Thwaites glacier in Antarctica— a glacier about the size of Florida— is another unstable body that is being closely monitored. The melting of this glacier would significantly raise sea levels. Iceland alone is home to over 400 glaciers, all of which could share Ok glacier’s fate by 2200, scientists say. Yet, it’s not alone.

In a press release from Rice University, Howe explains that we aren’t just losing one of the planet’s large freshwater reserves, but also important cultural and scientific “histories.” “By marking Ok’s passing, we hope to draw attention to what is being lost as Earth’s glaciers expire,” she says. 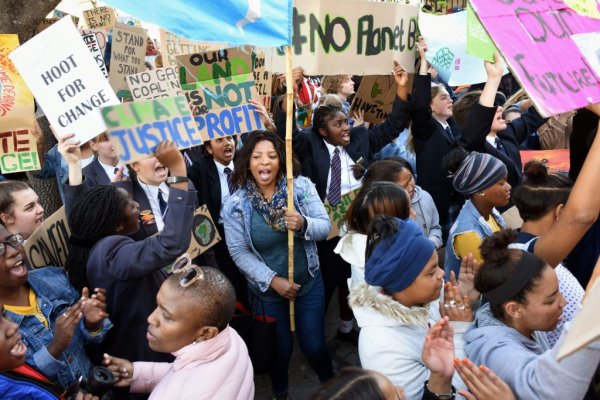 The Woman Who Discovered the Cause of Global Warming Was Long Overlooked. Her Story Is a Reminder to Champion All Women Leading on Climate
Next Up: Editor's Pick