Over the last month, President Donald Trump’s publicizing of large-scale immigration enforcement operations seemed to have the intended result: wall-to-wall media coverage that indicated he was moving to fulfill his signature campaign promise to deport “millions of illegal aliens” from the United States.

But the threat of massive raids has also had a significant, unintended side effect. For the first time, many undocumented immigrants are finding out that when Immigration and Customs Enforcement come to their door, they have rights.

Immigration attorneys, advocates, and organizers in 10 cities across the country told TIME that the highly public threat of ICE raids, communicated directly from the White House, has gotten out the “Know Your Rights” information and prepared immigrant communities in a way that years of previous outreach had not.

“We are now seeing the ‘Know your Rights’ information really working to save people’s lives and teaching them that they have agency,” said Shannon Camacho, who coordinates a rapid response network for immigrants in Los Angeles.

When more than a dozen ICE agents knocked on the door of a family with two children in her community early in the morning last week, the father remained “calm and confident” because he knew what to do, she said. He refused to open the door unless agents presented a warrant signed by a judge and, speaking through the window, declined to give their names. He had video footage from the security camera, and knew to contact the rapid response network for legal help.

“Fifteen ICE agents, for one family,” said Camacho. “They were shaken up from the experience, but we told them ‘You did everything great, you understood your rights as a person here in the U.S. regardless of whether you’re undocumented or not.’’’

Like all legal and immigrants rights organizations who spoke to TIME, Camacho’s group has seen skyrocketing requests for information and “Know Your Rights” trainings. While these efforts existed long before Trump, his rhetoric and the unprecedented media attention to ICE operations has managed to help it break through in ways it hadn’t before.

Before Trump first threatened the raids in a June 17 tweet, the hotline for the Illinois Coalition for Immigrant and Refugee Rights averaged roughly 40 calls a week. In the past week, that jumped to 250 calls a day, the group told TIME, with people requesting information on what to do if agents come to the door and reporting ICE activity in their communities. The group has also seen a “massive increase” in requests to have “Know Your Rights” trainings and workshops, as well as a flood of volunteers, said spokeswoman Cara Yi.

“There’s been such a spotlight put on this, and our elected officials have come out so strong, it’s going to be very difficult at least in the city of Chicago to reach any massive sweep,” said Lawrence Benito, the group’s executive director. “I mean, the Chicago mayor [Lori Lightfoot] was out in the community passing out our ‘Know Your Rights’ and hotline information.”

A few years ago, it would have been unusual to see government officials distributing information on how to evade immigration enforcement officials. Now it has not only become acceptable but expected for Democratic politicians and presidential candidates to share the “Know Your Rights” information on their platforms. Vermont Sen. Bernie Sanders, California Sen. Kamala Harris, Massachusetts Sen. Elizabeth Warren, New Jersey Sen. Cory Booker, former Texas Congressman Beto O’Rourke and New York Sen. Kirsten Gillibrand all shared the American Civil Liberties Union’s “Know Your Rights” page in recent days. The organization’s thread on Twitter laying out the information in multiple languages reached almost 3 million people.

“There’s definitely an energy that’s different now. People are saying ‘We marched, we’re done marching, and now we need to stand up and do something,’” Benito said.

Organizers across the country told TIME that unlike other inflection points — Trump’s election, the travel ban and the family separation crisis last summer — they are seeing people go beyond protest marches to taking action in the face of imminent ICE sweeps, which are meant to target undocumented families who have been issued final removal orders.

Volunteers ran out of “Know Your Rights” pamphlets as they canvassed homes, supermarkets, restaurants, churches and laundromats handing out fliers and providing on-the-spot preparation. Trainings have been bursting at capacity, forcing some to find larger venues. Immigration attorneys said families that previously would have felt helpless in the face of ICE agents at their door now know that they don’t need to follow their orders if they don’t have a warrant signed by a judge. Many have pasted the bilingual fliers to their door, instructing their children on what to do, organizers said.

News stories about attempted ICE arrests increasingly reflected that — for example the New Jersey teenager who refused to open the door to agents when they knocked at 1 am after having seen a “Know Your Rights” post on Instagram.

“We’re seeing a lot of these (attempts) thwarted because no one was opening the door,” said Thomas Kennedy, the political director of the Florida Immigrant Coalition. “It’s encouraging to see that people are taking these lessons and applying them to protect themselves.”

Unlike in the past, in many of the 10 counties in Florida his group canvassed they found people already seemed well prepared in how to handle ICE raids, he said. Kennedy attributes much of that to the shift in local media coverage of these raids, which are targeting families.

“There’s been a lot of sensationalizing of the issue, which spreads fear and anxiety — I mean four or five years ago the headline would have been straight-up ‘widespread immigration raids target illegal immigrants,’” he said. “But now most local news — in English, Spanish, and Creole — also includes ‘Know Your Rights’ information, not just the fear element.”

Americans who oppose Trump’s immigration actions have also been flooding workshops and training sessions on how to support their immigrant neighbors.

“When the initial tweet came out, we organized a training on 48 hours notice and had 200 people show up — more than double the usual turnout,” said Brandon Wu, an organizer with the D.C.-based group Sanctuary DMV. “People are not just outraged but they’re willing to step up and do what it takes in proactive solidarity.” For his group in the Washington, D.C. area, this includes everything from documenting ICE raids they may witness in their neighborhood to accompanying immigrants to court appointments for moral support.

While the Trump Administration’s public threats do “galvanize allies in a way we find really useful, on the other hand it’s hard to overstate the level of fear it puts in the immigrant community,” Wu said. “They’re saying ‘If I leave my house to go to the grocery store I might never see my kids again.’ But if this is what it takes to galvanize people then that’s what it takes, we’re here now.”

Activists say another side effect of the Trump Administration’s constant publicizing of immigration enforcement is that many Americans are, for the first time, taking a close look at the system.

“We are witnessing a surge of support because I think the virulent anti-immigrant rhetoric of this administration is opening many people’s eyes to the horrors of the US immigration system,” said Andrea Mercado, the executive director of New Florida Majority, a progressive grassroots group. “Many people who weren’t aware of the deportation crisis in our country under previous administrations are now motivated and committed to do something.”

The same “Know Your Rights” information has been around for decades, but the way it has broken to the surface over the last two years – and especially in the last month – is giving some advocates whiplash, they say.

“We were having ‘Know Your Rights” trainings 10 years ago,” Madhuri Grewal, federal immigration policy counsel with the ACLU, told TIME. “So it’s amazing that now, as a result of this new level of interest, the U.S. is in this moment where people are really starting to understand our immigration enforcement.”

While there is no consolidated data from across all of the ACLU’s local offices, the significant surge in interest has clearly helped disseminate information more effectively than ever before, and “undocumented communities are much more aware of their rights,” she said, pointing to social media as a main factor. “Teenagers with access to social media are seeing this and sharing it with their parents.” 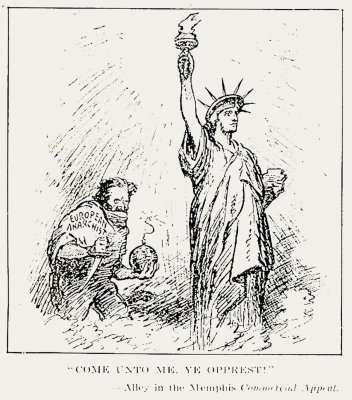 A Century Before Trump's ICE Raids, the U.S. Government Rounded Up Thousands of Immigrants. Here's What Happened
Next Up: Editor's Pick