By Vera Bergengruen and Brian Bennett

But Trump has had few qualms about publicizing similar ICE raids over the last month.

In mid-June, Trump caught even top ICE officials off guard when he tweeted that the agency would “begin the process of removing the millions of illegal aliens who have illicitly found their way into the United States” with upcoming raids, which were ultimately delayed. And on Friday he confirmed that federal agents would conduct raids over the weekend.

It was the latest in a series of unusual statements publicizing an upcoming, large-scale law enforcement operation, a move that the Trump Administration has previously criticized. On Friday morning, Trump brushed off concerns, including those raised by top officials at ICE and DHS, that broadcasting the timeline for the raids could hinder or endanger agents.

“Nah, we’re not giving warning,” he said. “Nothing to be secret about. If the word gets out, it gets out because hundreds of people know about it. It’s a major operation.”

Of course, he himself has played a large role in the “word getting out.” After Trump’s mid-June tweet, the first operation was canceled, and acting Homeland Security Secretary Kevin McAleenan indicated that publicizing the raids could endanger the “safety of the men and women who go out there every day to protect the American people.”

While the threat of “massive,” coordinated ICE raids has loomed over Trump’s presidency, former immigration officials say the way the upcoming operation has been rolled out indicates that the outward perception of a tough crackdown seems to be more important than an effective outcome.

This weekend’s operations are reportedly targeting roughly 2,000 immigrant families who remain in the country after having been ordered to be deported, some after failing to appear in court. Such a massive round-up would usually be kept under wraps to avoid alerting those who will be targeted. Trump has repeatedly emphasized the importance of not telegraphing upcoming plans when it comes to military operations. In this case, the telegraphing seemed to be the point, with the timeline and even the locations being made public. ICE reportedly plans to target 10 major U.S. cities — Miami, Atlanta, Chicago, Baltimore, Denver, Houston, Los Angeles, New Orleans, New York City and San Francisco.

It’s unclear why now, with a larger-scale operation across the country in the balance, Trump chose to publicize ICE’s plans, blindsiding even top officials in the agency. While the president’s announcement may have made the headlines he intended, with his supporters going on cable television to praise his crackdown and coverage of the ensuing panic in immigrant communities leading the news, former officials told TIME it’s likely to impede ICE’s arrests and that broadcasting the timeline could endanger ICE agents.

Announcing a raid beforehand “is just by and large not done” and a “politicization of law enforcement agencies,” said Doris Meissner, former commissioner of the U.S. Immigration and Naturalization Service, a precursor agency to ICE, about Trump’s announcement of immigration raids. “If it is done, that is to create a climate of fear…making people feel they are likely to be deported. It is clearly all part of what the administration sees as a way to get deterrence.”

While the Trump administration wants people to begin leaving the country on their own accord, a consequence of such tactics is that people “put themselves in more peril by not taking themselves to health clinics, not going to school, not going to work, not telling police about crimes they know about, and be more and more invisible in ways that can have deleterious effects in the community,” she said.

The fear of “collateral” deportations, where immigrants who happen to be present could be removed even if they are not the target of the raid, is amplifying the panic.

“If someone else happens to be around the building or neighborhood or household and is asked about their status and doesn’t have a final order and is not in status, they can readily be arrested,” Meissner said.

The agency has refused to comment on the reports “due to law-enforcement sensitivities and the safety and security of U.S. Immigration and Customs Enforcement personnel,” which some previous officials familiar with its operations see as a rebuke to the way it has been handled.

Instead, in another unprecedented twist, it was the acting head of US Citizenship and Immigration Services Ken Cuccinelli who first confirmed the raids earlier this week, telling reporters that they were “absolutely going to happen,” even though he does not speak for the agency.

“It’s unfathomable why the head of the agency responsible for immigration services would reveal details of ICE’s imminent enforcement operation,” Kevin Landy, a former official at ICE during the Obama Administration, told TIME. “ICE is officially saying they are not going to comment in order to protect the safety of its personnel, so what does that tell you?”

In another unusual side effect from the public announcement, immigration advocates, attorneys and local officials have spent weeks stepping up “Know Your Rights” campaigns to train immigrants who might be targeted. They have been disseminating pamphlets and posting on social media, going through the steps to follow if ICE comes to their home.

“Stay calm and keep the door closed. Opening the door does not give them permission to come inside, but it is safer to speak to ICE through the door,” the ACLU’s bilingual directions say.

The Miami Herald ran a story on Thursday titled “With Miami expecting deportations, some tips on your rights if ICE knocks on the door.” These have been amplified by Democratic lawmakers like Rep. Alexandria Ocasio-Cortez, whose tweet urging to “Check your neighbors & know your rights. Remember: no one can enter your home without a *judicial warrant.*” was shared more than 24,000 times. 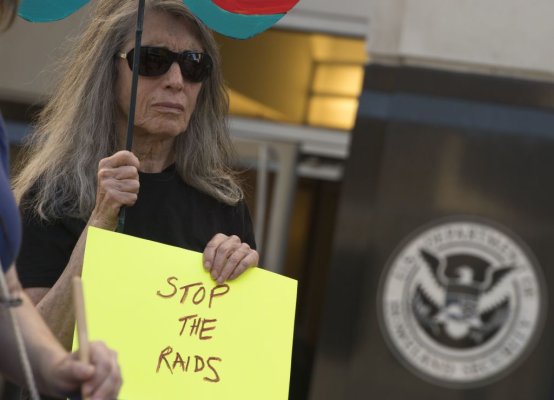 Communities Brace For ICE Raids Promised By The Trump Admin
Next Up: Editor's Pick