A Fire at Kyoto Animation Killed 33 People. Here's What to Know About the Deadly Arson Attack in Japan

Thirty-three people have died and dozens have been left injured after a suspected arson attack in an animation studio in Kyoto, Japan.

A man reportedly shouted “You die!” before setting fire to Kyoto Animation studio on Thursday, local media reports. A woman who saw the suspect being detained said he was shouting about being plagiarized, according to Reuters.

The fire started in the three-story building after the suspect sprayed an unidentified liquid accelerant, Kyoto prefectural police and fire department officials said, according to the Associated Press. Japanese media reports that a man resembling the suspect brought two large cans to a petrol station on Thursday, according to Reuters.

With 33 dead, the fire is the worst mass killing in Japan since a man stabbed and killed 19 people at an assisted living facility in western Tokyo in 2016. In 2001, 44 people died in a fire in Tokyo’s busy entertainment district, but that it ruled accidental according to the New York Times.

Thirty-six others were injured.

Japan’s Prime Minister Shinzo Abe said the fire was “too appalling for words” in a post on Twitter, adding: “I would like to express my sympathies to the injured people and pray for a quick recovery.”

Here’s what to know about the suspected arson attack on Kyoto Animation Co.

Who is suspected of starting the fire?

Broadcaster NHK said the suspect had been detained in connection with the fire and was later taken to hospital for treatment. A witness told NHK that the suspect was burned on his armed and legs and complained that something had been “stolen” from him, according to the AP.

He has not been identified by authorities, but his driver’s license had an address in Saitama, a northern suburb of Tokyo, public broadcaster NHK said, according to Reuters.

Reuters reports that the man — who suffered serious burns to his face and legs — is under police supervision. He had no apparent connection with Kyodo Animation.

What is Kyoto Animation Co.?

Kyoto Animation, better known as KyoAni, is unlike many other animation studios. Founded in 1981 by producer Yoko Hatta, is known for its focus on quality rather than quantity, preferring to hire full time illustrators rather than freelance ones.

The studio has produced TV series and feature films, as well as publishing illustrated novels and manga.

What shows and movies have they produced?

Its hits include anime such as Lucky Star, K-On! and Haruhi Suzumiya. Its anime adaptation of the K-On! manga is one of its best-known works. The TV series, a comedy about five high school girls who play in a band, was very successful when it aired in Japan in 2009, according to the Japan Times. It was also broadcast overseas.

A Silent Voice, a feature film that arrived on Netflix in the U.S. last month, was hailed by critics and fans when it was released in 2016. The drama based on manga by Yoshitoki Oima deals with fracturing friendships and childhood suicide. The Guardian gave it a four-star review, calling it “a beguiling film: subtle, sensuous and delicate.”

Its latest movie, Free! Road to the World – The Dream, is due for release this month, according to Reuters.

How are the fans reacting?

Thousands of fans and anime industry professionals have taken to Twitter to pay tribute to the studio. Many praised Kyoto Animation for treating its employees well in an industry known for harsh working conditions and low pay. A labour shortage combined with a growing demand for content around the world has put pressure on studios in recent years.

Mike Toole, editor-at-large at Anime News Network, wrote: “Kyoto Animation are a rarity in the anime business: they treat their people well, they strive to own part of their works, and their creations are consistently excellent, at the very least on a technical level.”

Sentai Filmworks, a licensing company specializing in Japanese animation and film based in Houston, Texas, has launched a crowdfunding campaign called Help KyoAni Heal. The campaign has raised over $300,000 our of its $500,000 goal.

Jun Shin, a 30-year-old Chinese man living in nearby Osaka, visited the site Thursday night with flowers to commemorate the victims. “I am an anime fan,” Jun told Reuters. “I have watched animation since I was a student, and this was a terrible event, I just want to come and mourn. It left me speechless.”

None of the victims’ identities have been disclosed yet, according to Reuters. Kyodo news agency reports that authorities said 19 of the victims, found on a staircase leading up to the roof, may have been trying to escape the fire on lower floors, reports Reuters. 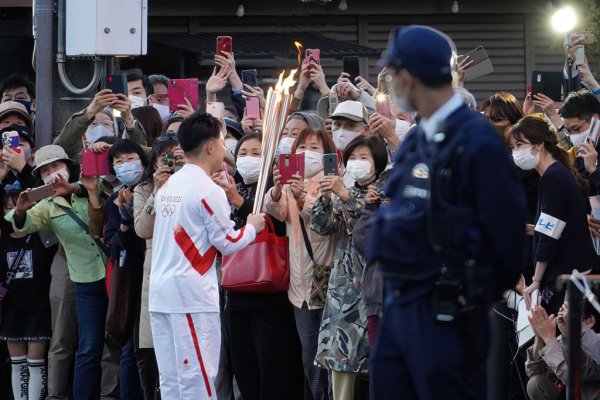