The State Department announced Tuesday that it has brought sanctions against four Myanmar military generals, including the commander-in-chief, for their roles in ethnic cleansing of the country’s Rohingya Muslim minority.

The sanctions were issued for their involvement in “gross violations of human rights, including extrajudicial killings, against Rohingya” from August to September 2017, the State Department said in a press release.

Myanmar’s military began a violent crackdown in late 2017 against the Rohingya, a mostly Muslim ethnic minority, in Myanmar’s westernmost Rakhine State. U.N. investigators determined that the violent campaign of arson, rape and murder was carried out with genocidal intent.

“These four senior officials are well-known to the international community to be responsible for gross human rights violations across the country, not only in Rakhine State but also in Kachin and Shan states over the past decade,” a State Department spokesperson said in a teleconference with reporters, also referring to civil conflicts in other parts of the country.

Read More: ‘We’re Not Allowed to Dream.’ Rohingya Muslims Exiled to Bangladesh Are Stuck in Limbo Without an End In Sight

Rights groups welcomed the sanctions as a good, albeit belated, first step toward accountability.

“Although the sanctions are limited to travel restrictions, the move signifies that Washington is finally getting serious about accountability,” Senior Advocate for Human Rights Dan Sullivan of NGO Refugees International said in a statement. “It also acknowledges what the State Department itself has documented—that ethnic cleansing has taken place in Myanmar with virtual impunity.”

These are not the first sanctions the U.S. has imposed on those responsible for the atrocities against the Rohingya. Five military generals and two military units have already been sanctioned. But experts say more should be done, including a referral to the ICC for criminal prosecution.

“In order to truly promote accountability, the United States should also lead international efforts to refer Myanmar to the International Criminal Court or to establish an ad hoc tribunal,” Sullivan says.

About a million Rohingya remain stuck in slum-like refugee camps in the coastal district of Cox’s Bazar in Bangladesh, where they fled from violence and persecution. 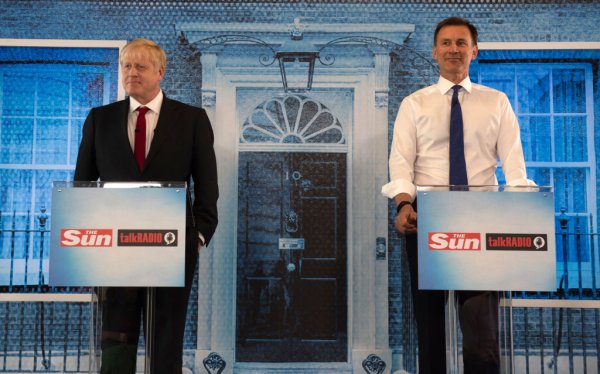 On the Cusp of Power, Boris Johnson's Inflammatory Language on Islam Returns to Haunt Him
Next Up: Editor's Pick