Some internet challenges are best not to try at home.

Though if you do, it’s definitely at your own risk, as in the case of this latest meme challenge. Set to the tune of Australian rapper Iggy Azalea‘s 2013 song “Work,” users are uploading videos of themselves over the opening lyrics “Walk a mile in these Louboutins” — while using all kinds of, well, innovative materials to replace actual shoes. (The “Louboutins” of the song are a reference to Christian Louboutin, the fashionable French shoe designer known for making sky-high heels with a signature bright red sole.)

In the original music video, Azalea struts down a desert highway in her red-bottomed Louboutins as she sings about working hard to get somewhere in her life. “Pledge allegiance to the struggle,” she raps at one point.

Now, in the organic way of the popular short-form video platform TikTok, the song is getting a second life with this revival as a meme people are imitating.

Of course, not everyone has the funds to secure a set of Louboutins, or the interest in doing so. Instead, TikTok users have gotten creative with their footwear, playing on the song’s theme. So far, we’ve come across everything from cups to plastic bottles to buckets, from stilts to oven mitts — all transformed into an (often very precarious) form of shoe.

Warning: watch these videos at your own risk, as they seldom end well.

While videos on TikTok continue to evolve in unexpected directions, it turns out this meme is actually great timing for Azalea: she has a new album coming out on July 19, called In My Defense. 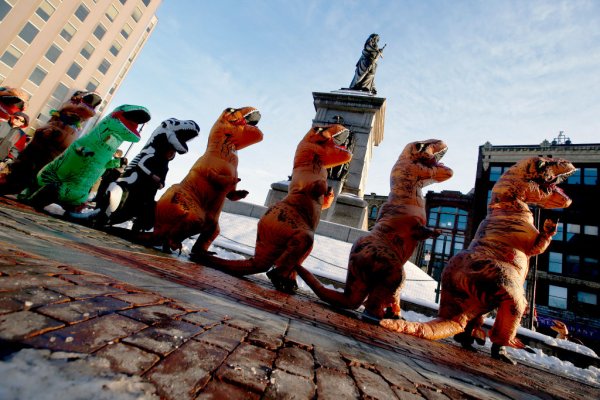 Take a Well-Deserved Break With This Video of a T-Rex Race
Next Up: Editor's Pick