Racing fans, the stereotype goes, tend to be “petrolheads” — people who love the ferocious growl of an internal-combustion engine, the unmistakeable smell of burning fuel and oil, and the adrenaline jolt from a nearly-1,000-horsepower car roaring past a thrilled crowd. Formula E, an upstart electric racing championship whose fifth season ends with a double-header championship in Brooklyn on July 13-14, has none of these things. But despite the naysayers, it’s building a loyal fanbase anyway.

That’s good news even if all you know about professional racing is that winners of the Indianapolis 500 chug milk for some godforsaken reason. In the automotive world, racing has long driven technological advancements, with developments for success on the track finding their way into cars that you or I could pop into a dealership and buy for ourselves. That’s holding true for electric racing, too. Automakers from BMW to Nissan say that innovations and insights they have developed from Formula E racing has gone on to improve their everyday electric vehicles, or EVs. That’s a smart move for car companies, as they’re under increasing pressure to adapt to an electrified world. And as the world grapples with a changing climate, any developments that result in better, more viable electric cars, while they won’t be a silver bullet, are more than welcome.

That tech pipeline is “a real focal point” for Audi, says Allan McNish, Audi Sport’s Formula E team principal and a three-time winner of the 24 Hours of Le Mans, a grueling endurance race. “The racing department sits directly underneath the technical development department, and so therefore there is always the very close hand-in-hand relationship between what we do on the track and what actually comes on the road,” he adds.

It’s a similar story at BMW. When the Munich-based automaker joined Formula E this season, it turned to the teams behind the i3 and i8 electric cars for their insight. Now, with their first season largely behind them, those same specialists are turning around and applying what they’ve learned on the track to BMW’s consumer EVs. “This expertise they have gained through racing actually goes straight back into the next project they have, and they are now working on the fifth generation of electric powertrains for BMW,” says BMW Motorsport Director Jens Marquardt. “So we closed the circle completely.”

Formula E’s rules are purposefully designed to ensure teams focus on pushing electric vehicle technology forward, rather than mucking about with cars’ aerodynamics. Every team drives the same car, using the same battery. They can, however, modify elements of the drivetrain, meaning a team’s competitive advantage comes from getting the best possible performance from an electric system.

“A common view of all of the people involved in Formula E is, we want to focus on the electric drivetrain, we don’t want to focus on whether we can get a tad more aero downforce on the car than the next team, or whether maybe we can squeeze a little more out of the battery,” says McNish. “With this category, today, we want to promote our electric technology, and therefore that limits us to the electric motor — the drivetrain — and we can still make a difference.”

Electric cars, with their instant torque and sometimes comically absurd acceleration, are undeniably fun to drive. But they suffer from a drawback that limits their viability for some: it often takes a lot longer to charge an EV than refill a gas tank (partial charges can be faster for some EVs, though experiments with battery-swapping have largely fizzled out). Many electric cars have more than enough range to get a suburban driver from home to work and back again for an overnight recharge. But longer drives, like road trips, can be a challenge. That might dissuade would-be electric vehicle owners from making the jump.

A version of that problem presents itself in Formula E racing. Teams aren’t allowed to charge or replace their battery mid-race, another clever rule that helps drive innovation. As a result, success in Formula E largely depends on wise energy management. Because there’s no quick top-off waiting for drivers at a pit stop, they have to constantly consider their remaining energy levels when they’re thinking about attacking for the lead, or defending their position in the front of the pack. So for Formula E teams, figuring out a way to optimize their energy efficiency can give them a competitive advantage over their rivals. That kind of innovation can make its way into road cars, increasing their efficiency and making them a more compelling alternative to their gasoline counterparts.

“The focus of Formula E is efficiency, and deriving the maximum efficiency out of your powertrain system,” says Nissan Global Motorsports Director Michael Carcamo, who adds that Nissan’s Formula E car has computer code governing battery efficiency that was borrowed from the LEAF, the company’s popular street EV. And while the company is using the software “in a completely different way” during a race, Formula E “helps us understand the limits” of the code, he says. “How to maximize energy management is one of the things we’ve learned,” says Carcamo.

The early success of Formula E — 300,000 fans came to races in 2018, up by 100,000 from the previous season, while 330 million people tuned in on TV and more than 550 million watched video online — has undoubtedly rocked the racing world, where many a gas-guzzling traditionalist has shunned the upstart alternative competition as an inferior knockoff that isn’t as fast, isn’t as loud, isn’t as fun. But in going to a Formula E race, where high-performance, sci-fi-looking electric cars scream past the crowd with a demonic whir that sounds like a pack of Star Wars TIE Fighters hunting down Han Solo’s Millennium Falcon, you can’t help but feel like EVs are at least part of motorsports’ future. And if Formula E can help drive EV development at a time when it’s increasingly clear we need to wean ourselves off fossil fuels, so much the better. 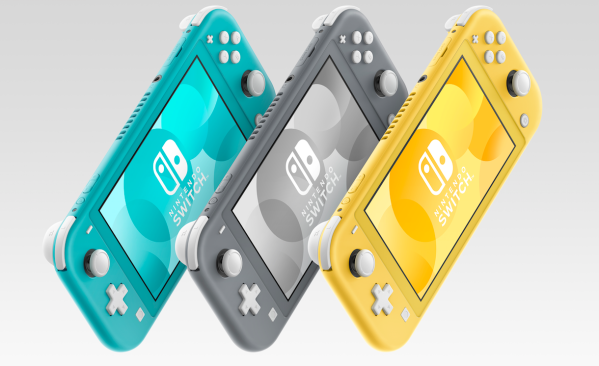 We Tried the New Nintendo Switch Lite. Here's What It's Like to Play
Next Up: Editor's Pick