Two Big Earthquakes Shook Rural Southern California. What Would Have Happened If They Hit a Major City?

As southern California recovers from 6.4 and 7.1 magnitude earthquakes that started on July 4 near the town of Ridgecrest and felt as far as Los Angeles and Las Vegas, many were grateful they didn’t strike in more densely-populated areas.

“Earthquakes like these are just reminders to not be complacent about them,” Gregory Deierlein, professor of civil and environmental engineering at Stanford University, tells TIME. “With all the risks we hear about every year—some areas flooding or the tragic wildfires that have occurred more recently—earthquakes on the other hand, the risk is always there, but it’s all going to get unleashed at once.”

Here’s what might happen if strong earthquakes hit closer to some of California’s many urban areas.

How likely is a 7.0 magnitude earthquake to hit San Francisco or Los Angeles?

According to the U.S. Geological Survey (USGS), the Hayward Fault, which runs for about 45 miles along the East Bay of the San Francisco region, is the most urbanized in the U.S. Nearly 2.4 million people live near it in the Bay Area according to the Berkeley Seismology Lab. One of the most destructive earthquakes in California history happened on the Hayward Fault in 1868, when a magnitude 6.8 killed 30 people and caused significant damage to property. The USGS predicts the fault is due for another damaging earthquake that could hit at any time, and says there’s a 33 percent chance of a 6.7 magnitude or higher earthquake to hit in the next three decades. Back in 1868, the population in the region was only about 114,000, whereas now over 7 million people live in the Bay Area.

The San Andreas fault line runs all the way from near San Fransisco to the Los Angeles region and past San Diego. According to the USGS, some sections of the fault are overdue for a significant earthquake, but says the fault is historically hard to predict. In 1994 a 6.7 magnitude earthquake struck near Los Angeles killing 57 and causing widespread infrastructure damage. The earthquake was caused by a blind thrust fault, a fault that was previously unidentified.

Can the cities’ infrastructure withstand that impact?

The HayWired Scenario was devised to imagine what would happen if a 7.0 magnitude earthquake hit the Bay Area on April 18, 2018. It was a hypothetical but scientifically plausible look at the city’s level of preparation. It predicted 800 potential deaths and an additional 18,000 injuries. It also predicted about 450 large fires near the epicenter and $83 billion in property and business losses. The USGS and partners developed the scenario, which was published in volumes between 2017 and 2018 in order to push for further actions by officials and citizens to prepare for potential earthquakes. The scenario was a partnership between physical scientists, engineers, biogeochemists and social scientists who used a variety of methodologies including computer simulations to measure impacts of a 7.0 magnitude earthquake.

“We have pretty good building stock here in California,” she tells TIME. “For buildings that were built more recently, we have lots of experience—engineers designing these buildings have a lot of earthquake precautions built into them. It’s not like earthquakes you see globally with less ridged structures.”

Since the 1994 earthquake that struck Los Angeles, building codes in California have dramatically improved to withstand high magnitude earthquakes, according to both Strauss and Deierlein. The Loma Prieta earthquake in 1989, which killed 63 people, resulted in similar changes in Northern California. They added that there have also been governmental efforts to update older buildings. Both say newer buildings are not likely to fall, but Deierlein says what is less clear is how much physical damage buildings could sustain and how many would become uninhabitable through secondary damage like broken plumbing or cracked infrastructure.

“From a safety standpoint they’re in good shape,” he says. “But from damage that could result in down time, there’s still question marks.”

Older buildings made from concrete or built from masonry materials that are not reinforced are another concern.

“San Francisco, Los Angeles and Oakland and others are aware of these older existing buildings,” Deierlein says. “It’s kind of a dilemma in terms of how you can litigate the risk in those because it’s expensive to [update them] and these are many privately owned buildings, so there could be some collapses of older masonry or concrete buildings and damage to other structures.”

Strauss added that road damage and power outages could cut people off from resources.

“Our main problem is we have a whole lot of people who need water and food and shelter,” Strauss says. “If any of those things get disrupted for a long period of time, you can see the damages resulting from that.”

What should California residents do?

Strauss says being aware of potential risks is the best way to overcome high magnitude earthquakes. She recommends households keep an emergency supply of water, food, flashlights and batteries and come up with a family plan on how to reunite with loved ones should there be a separation.

“You’re going to be better equipped to ride it out,” she says. “Don’t be fearful, but be empowered.” 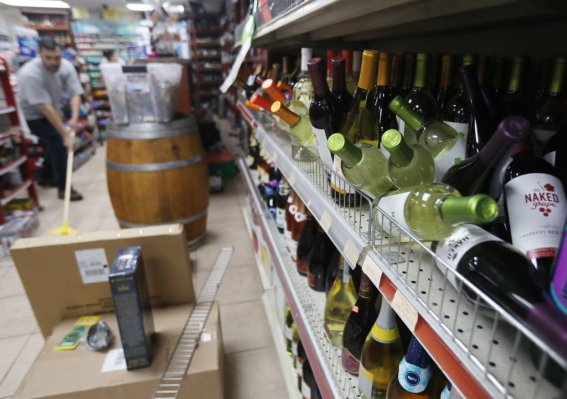 As Aftershocks Continue in California, Families Prepare
Next Up: Editor's Pick