The Biggest Earthquake in 20 Years Hit Southern California. Here's What to Know

The biggest earthquake in Southern California in 20 years caused damage and fires near the Mojave Desert Thursday.

The 6.4-magnitude earthquake rocked parts of Southern California and Nevada, rattling people as far as Los Angeles and Las Vegas, more than 100 miles from the epicenter.

The quake was recorded outside Ridgecrest near the Mojave Desert, according to the U.S. Geological Survey (USGS).

Fire departments across the region are responding, including with medical assistance.

Seismologist Lucy Jones talks during a news conference at the Caltech Seismological Laboratory in Pasadena, Calif., Thursday, July 4, 2019. A strong earthquake rattled a large swath of Southern California and parts of Nevada on Thursday morning, making hanging lamps sway and photo frames on walls shake. There were no immediate reports of damage or injuries but a swarm of aftershocks were reported.
John Antczak—AP

There have been dozens of aftershocks, including one registering 5.4-magnitude early Friday, following the quake.

“This earthquake is the largest in the Little Lake area in the last century,” seismologist Lucy Jones told reporters at a press conference Thursday afternoon, referring to the fault zone where the earthquake occurred.

Jones added that it was the biggest quake in Southern California in at least 20 years.

She added that there’s a 5% chance that an even bigger earthquake will happen in the next week––though the highest likelihood of one is in the next day.

What areas were worst hit by the earthquake?

The town of Ridgecrest, Calif. was the worst hit. The Kern County Fire Department has responded to at least two dozen incidents, from fires to providing medical assistance.

No major injuries have been reported. The Ridgecrest Regional Hospital evacuated, according to the Kern Fire Department.

The San Bernardino County Fire Department has also reported infrastructure damage including cracks in buildings and power lines down.

How much damage has been reported?

In this image taken from video provided by Ben Hood, a firefighter works to extinguish a fire, Thursday, July 4, 2019, following an earthquake in Ridgecrest, Calif.
Ben Hood—AP

Are there any injuries?

Multiple injuries and two house fires were reported in Ridgecrest, according to the Associated Press, as well as small vegetation fires, gas leaks and cracked roads.

The Kern County Fire Department said 15 patients were evacuated from the Ridgecrest Regional Hospital as a precaution against potential aftershocks.

There were no reports of serious damage or injuries in Los Angeles, the local police department said.

Will there be another big earthquake?

It is possible for large earthquakes to trigger even larger earthquakes, but the likelihood diminishes as time passes, Jen Andrews, a seismologist at the California Institute of Technology, tells TIME.

“The longer we go the less likely it is we’ll see any larger activity due to this one,” she says.

She added CalTech’s Seismology Lab has recorded more than 100 earthquakes above magnitude-2, and about 10 above magnitude-4 and the region can expect aftershocks in the next hours and days.

“This earthquake is normal, in fact it was probably overdue,” Andrews says. “We haven’t really seen any magnitude-6, 7’s in the last 20 years, so it’s been quite quiet for southern California. This isn’t especially unusual.”

“If the aftershock sequence decreases as we expect, the largest event they should feel is probably something around magnitude 5,” Andrews says.

“So they should expect to keep shaking and and make sure they’ve got all their prepared escape plans if they do start to feel stronger shaking.”

How many aftershocks has the earthquake triggered?

Dozens of aftershocks have been recorded throughout the area since the earthquake. On Friday morning, the biggest one to hit the region so far came in at a 5.4-magnitude, a little after 4 a.m. PT.

Before Friday morning’s rumble, the biggest aftershock was 4.6-magnitude.

The 5.4-magnitude aftershock was registered 10 miles west of Searles Valley and 11 miles north-northeast of Ridgecrest. Four other aftershocks have followed within the same area, all around 3-magnitude.

How are people reacting to the earthquake?

Fire departments and government agencies in Los Angeles, Kern County and San Bernardino County have reported an overwhelming amount of 9-1-1 calls and are urging people to only call if there’s an immediate emergency.

Many other users are turning to social media to share their experiences. 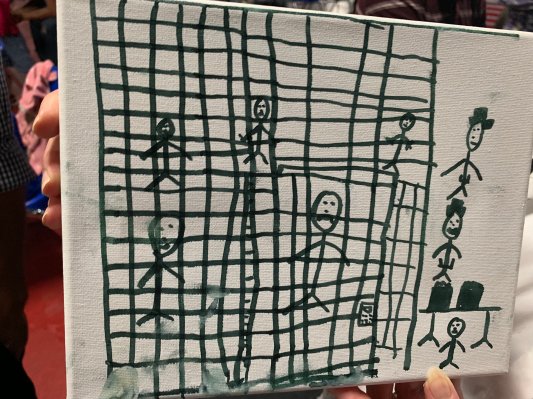 Drawings by Migrant Children Depict People in Cages
Next Up: Editor's Pick