A Wood-Carved Statue of Melania Trump Has Been Unveiled in Her Hometown. Local Residents Are Bemused

A picture taken on July 5, 2019 shows what conceptual artist Ales 'Maxi' Zupevc claims is the first ever monument of Melania Trump, set in the fields near Sevnica, the First Lady's hometown.
JURE MAKOVEC—AFP/Getty Images
By Jasmine Aguilera

A new monument to Melania Trump has been erected in her hometown of Sevnica, Slovenia, and its creators are calling it the first public statue in commemoration of her. The idea came to Brad Downey, an artist from Kentucky currently based in Berlin according to his Instagram account, who commissioned Sevnica local and “amateur chainsaw sculptor” Ales “Maxi” Zupevc to carve it, according to AFP. According to Downey’s Instagram, the statue will be the subject of a documentary and exhibition he is working on.

Via the artist’s statement Downey has shared online:

The statue depicts the First Lady on Inauguration Day in 2017, wearing a blue dress designed by Ralph Lauren and waving at crowds. Zupevc took to a tree and carved the statue with a chainsaw.

U.S. President Donald Trump waves to supporters along the parade route with first lady Melania Trump and son Barron Trump after being sworn in at the 58th Presidential Inauguration January 20, 2017 in Washington, D.C.
Pool—Getty Images

Critics of the statue immediately began comparing it to a scarecrow, however. “I can understand why people might think that this falls short as a description of her physical appearance,” Downey told AFP.

“We in Sevnica can only laugh and, at the same time, hold our heads in our hands over their [the Trumps’] catastrophic reputation,” one local resident identified as Nika, a 24-year-old architecture student, told AFP. Other locals, speaking with the British TV network ITV, described the statue as “a disgrace,” and argued it looked more like Smurfette than the First Lady.

AFP reports that Downey came up with the idea as part of a project that explores Melania Trump’s roots both metaphorically and literally. Downey wrote in his Instagram account that he chose to work with Zupevc because he was born in the same year and the same hospital as Melania Trump. He writes that the statue is rooted on the banks of a river facing the town in salute.

Residents have also sold Melania Trump-themed food and merchandize, capitalizing on interest in the town’s claim to fame.

A picture taken on July 5, 2019 shows what conceptual artist Ales Zupevc claims is the first ever monument of Melania Trump, set in the fields near town of Sevnica, the First Lady's hometown.
JURE MAKOVEC—AFP/Getty Images
More Must-Read Stories From TIME 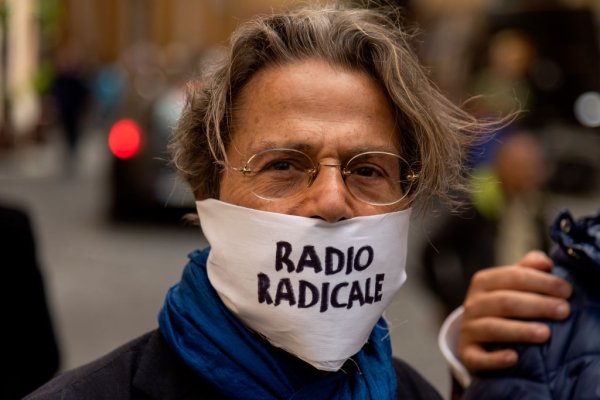 A Radio Station in Italy Finds Itself on the Frontline of a Populist Attack on the Press
Next Up: Editor's Pick