Hong Kong police have arrested a suspect in relation to the July 1 ransacking of the legislature, while Beijing intensified its condemnation of the protests and of political leaders in Britain, who have voiced support for them.

Local government-run radio reported in the early hours of Thursday that a 31-year-old man had been arrested and accused of forcible entry into the Legislative Council, while 12 other suspects were detained Monday in connection with other public order violations, including possessing offensive weapons. A further wave of arrests is expected as police track down protesters suspected of storming the city’s parliament.

Hundreds of anti-Beijing demonstrators smashed their way into the Legislative Council on the 22nd anniversary of the former British colony’s retrocession to Chinese sovereignty. The unprecedented attack caused millions of dollars of damage. Protesters defaced the semi-autonomous enclave’s official emblem, tore up its post-colonial constitution, and draped the British colonial flag across the president’s chair. Slogans spray-painted inside the complex read “We are not China” and “H.K. is not China.”

It went on to say that “those who love the country and love Hong Kong” should “strongly condemn extremely violent acts” and seek the prosecution of those who “seriously violate the law.”

In an editorial Tuesday, the state-run, English language Global Times asserted that “Chinese mainland society and Hong Kong belong to the same big family” and stated that it was “a disgrace that such a developed society could carry out this kind of reckless and savage violence that has signaled an ominous alert for the city’s future.”

Tensions have also risen between Beijing and Whitehall, after the Chinese ambassador Liu Xiaoming accused the U.K. of interfering “in the internal affairs of Hong Kong” and supporting “violent lawbreakers.”

His remarks came after British Foreign Secretary Jeremy Hunt said he had witnessed “terrible scenes” in Hong Kong. “My heart goes out to people who do have to fight for their freedoms and who are worried they could lose their very, very precious way of life,” he said.

British Prime Minister Theresa May said that it was vital that Hong Kong’s “high degree of autonomy” be respected, while the politician tipped to succeed her, Boris Johnson, said he backed Hong Kong’s protesters “every inch of the way” in their fight against an unpopular bill that has galvanized opposition to Beijing. (The now suspended legislation would allow extradition to mainland China for the first time, and many in Hong Kong fear that Beijing would use the provision to round up political opponents and dissidents.)

A Chinese Foreign Ministry spokesman accused Hunt of laboring under a “colonial illusion,” while Whitehall summoned Liu over his remarks, describing them as “unacceptable and inaccurate.”

Meanwhile, further protests are planned for this weekend. On the Telegram messaging app—which Hong Kong’s leaderless protesters use to organize themselves and exchange information—appeals have been made for a vigil on Saturday for a young woman who fell to her death from a shopping mall after penning a Facebook post encouraging Hongkongers to continue in their fight.

Other messages are calling for a march on Sunday through streets of the Kowloon peninsula that are heavily frequented by mainland Chinese tourists, ending at the West Kowloon Station.

The station is a controversial symbol of China’s presence in Hong Kong. High-speed trains to the mainland depart from there but, more significantly, a large part of the building is a so-called “Mainland Port Area,” subject to Chinese law and employing hundreds of mainland personnel. 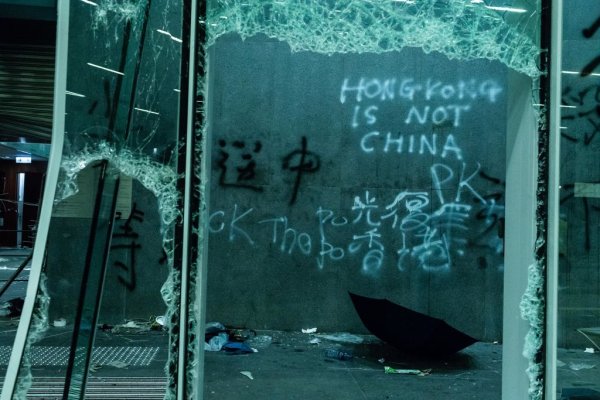